Gigi Hadid hasn’t had a major night out in more than a year. Partly because of the pandemic, but also because she gave birth to her daughter, Khai Hadid Malik, this past September. But the model and new mother just reentered the New York City nightlife scene, courtesy of the new Ralph Lauren Fragrances Ralph’s Club campaign.

The campaign for the unisex scent reenacts the Ralph Lauren Fall 2019 fashion show and celebrates the vivacious nightlife of New York City and the spirit of being together (just what we all need after a year in isolation). Featuring a short film set in a swanky nightclub named after the new scent, the campaign allowed Hadid to not only experience the Ralph Lauren runway again, but to reunite with her friends and costars Luka Sabbat, Fai Khadra, and Lucky Blue Smith.

Ahead of the campaign’s launch, we catch up with Hadid to chat about life as a new mom, her favorite scents, and the first place she’s returning to post-pandemic.

What was it like reunite with friends and finally indulge in the lively nightlife of New York once again?

I love the whole environment and vibe of the show. Even though we shot the commercial during COVID, it was a nice celebration of coming together, to be around friends again and experience the togetherness again that we’ve all missed so much.

Did you have a favorite moment on set?

The film was shot in Ralph’s Club, and while a lot of it was by the bar area, the last scene we’re all having fun on the dance floor. That experience was so different compared to the rest of the year, so it truly felt like a celebration. And the fact that it was in Ralph’s environment made it so nostalgic and timeless. It will always be a major visual memory in my head and was very fun. 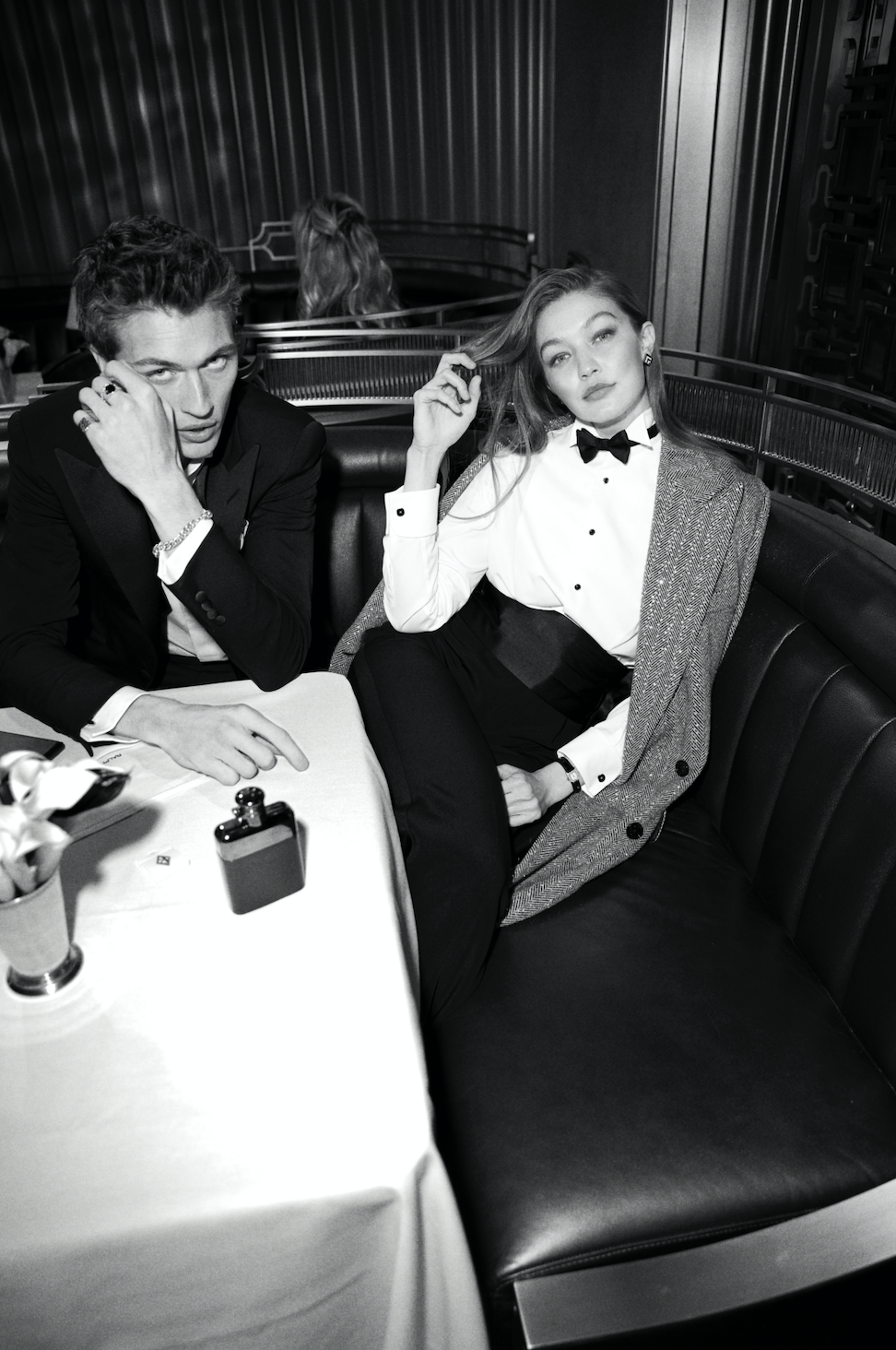 The ritual of applying a fragrance can be uplifting. How does the Ralph’s Club scent make you feel?

I think that the commercial itself is very symbolic of how the fragrance makes me feel. Also just to be in the show again, in the same outfit and coat, felt so powerful. It’s something sort of masculine as well. I was one of the boys, I was in, like, a suited outfit. So to be in a [unisex] fragrance campaign and to not be dressed as super girly in a tight dress made me feel strong, powerful, and confident. And the fragrance makes me feel that way. I don’t think you have to wear a cupcake or a fruity fragrance to feel sexy. You can also have fun and mix stuff, and do something that feels true to how you want to feel when going out.

Does the fragrance transport you anywhere?

It truly feels like any night in New York. It’s just so fitting, and Ralph is such an American icon. To walk through New York smelling like Ralph’s Club is exactly like a night out in New York City, where anything can happen. It’s so uniquely New York. You can turn a corner and all of a sudden, you see someone or something that changes your entire night. I think everyone hopes for a night in New York.

Do you have a first memory of playing around with fragrances?

I have this really vivid childhood memory of walking into my backyard. The sun was out and was hitting these jasmine flowers. The air smelled of the flower and the warmth of the sun made it so much more fragrant. Natural fragrance wise, that’s my first experience.

But I also have so many memories of, like, being in my mom’s bathroom—when she was there, but also when she wasn’t. When you’re a kid and you walk into, like, your parent’s bathroom, it’s like a wonderland. I would even look at the bottles and admire the design or read the directions on the back. I love the visual creativity of fragrances too. I always appreciated the bottles, as well as mixing fragrances to just see what I liked as a kid. Then I grew up and my senses developed, but that was the start of me appreciating it.

Has your scent preference changed at all?

I went through, like, a big citrus chapter of my fragrance life. But now, I lean more towards more complex smells. But I like when you question something about a fragrance. Especially when you walk up to someone or give them a hug and you ask what scent they’re wearing. The fragrance sparks a thought. Someone once told me, “Buy art that confuses you, because then you’ll never get tired of it hanging on your wall,” and I feel the same about fragrance. There needs to be something that’s a little bit confusing. Otherwise, I don’t think it’s fun.

Do you wear certain scents based on the mood you’re in?

On a daily basis, the scent I wear definitely depends how I feel. I have certain ones that I always go back to, but I’m definitely open to try new ones. But also during the day, I tend to wear lighter fragrances or mix. Then at night is when I like to bring out the stronger, deeper, more complex scents.

It’s so exciting that you’re a new mom. Has your beauty routine changed at all since you had Khai?

I’ve really simplified my routine to just the necessities of the necessities. Obviously when I’m working, I do more. But when I’m home, I’m on mom duty full-time. I wake up in the morning, wash my face, moisturize, put on deodorant, and love to add a fragrance. But if I don’t have time, I’m not going to wear makeup. My hair is always in a bun so it doesn’t get pulled out. Obviously, I still have moments where I get a little bit dressed up. Or I try to make me-time during the week, which is just a facial or take a really long shower just to relax. When I’ve had time to recharge and come back to life, I have more to offer, and that’s when I feel really strong and energized.

It’s still early, but have you thought about any beauty secret you’ll pass down to your daughter?

There’s a few that my mom taught me that I will for sure. My mom never really gave me advice on, like, what to do with my skincare or makeup, but I definitely watched her enough to learn. She had a very simple, natural take on skincare. She didn’t overdo it with product, and I feel like I’ve taken that on, where I think less is more. Doing too much for my skin or beauty routine can make it more complicated, and sometimes my skin can’t handle it. I think I’ll teach Khai to keep it simple when it comes to makeup, like my mom taught me.

Do you have a favorite part about motherhood thus far?

It’s all my favorite, even if it gets hard at times. You have so much patience and unconditional love that comes with motherhood. It’s just fun to watch her grow and learn every day. And she makes me so proud. It’s funny how even the smallest things are exciting. 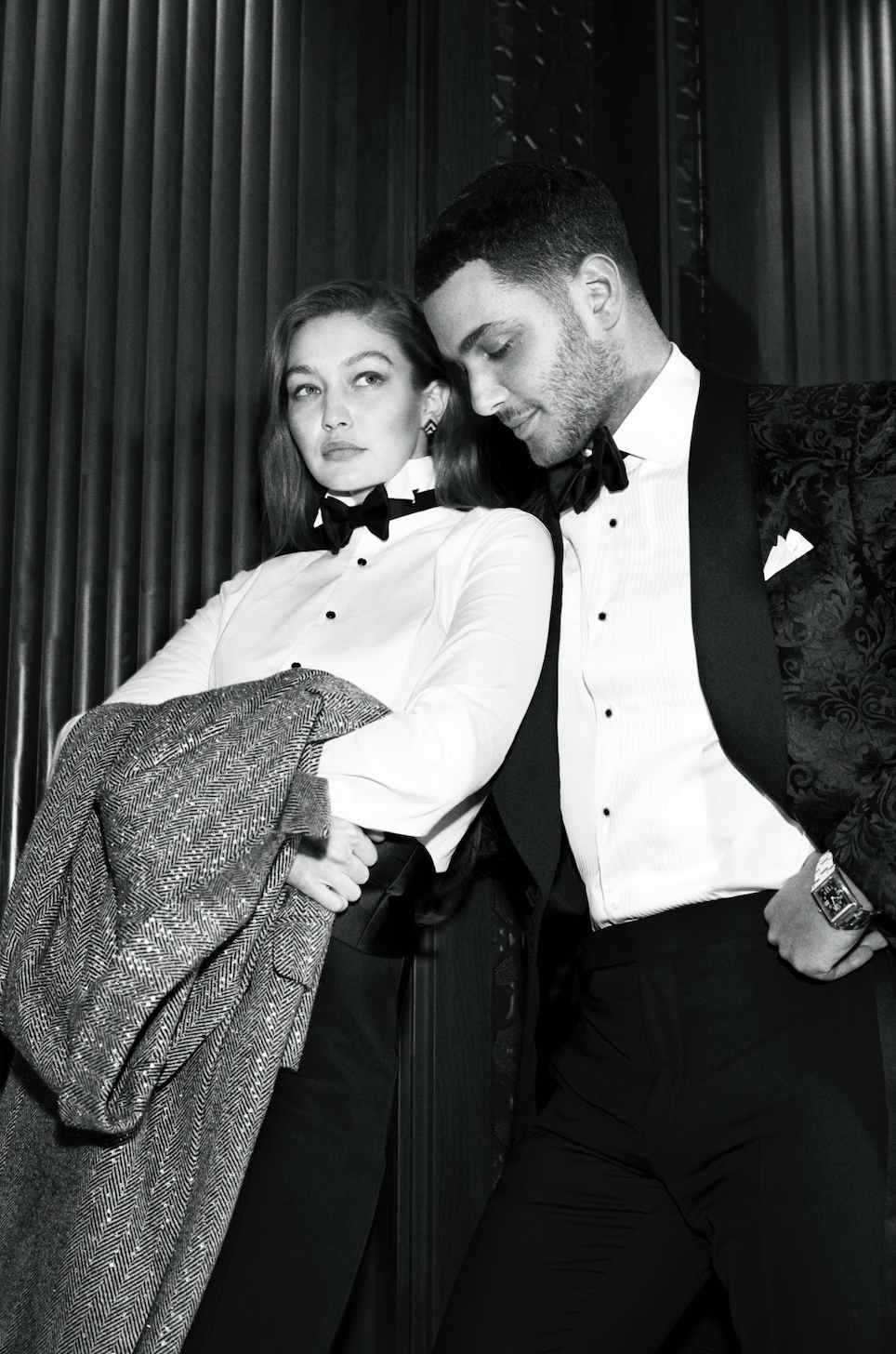 Does the Ralph’s Club fragrance remind you of anyone in your life?

The Ralph’s Club fragrance is one that can be really worn by everyone. It’s a scent that would make anyone wearing it feel strong and ready to conquer where they are headed to next. So there’s a lot of people I am going to share it with. I also think the bottle is so beautiful. When I think of the bottle, it reminds me of, like, my manager Luiz’s briefcase. He’s always carries chic, handmade leather bags and briefcases. This scent reminds me of that, because it’s really beautiful and handcrafted.

Where’s the first place (besides Ralph’s Club) that you’ll be wearing the fragrance?

Besides Polo Bar, which is the most obvious, I will be wearing this to Le Chalet at Saks Fifth Avenue. The venue makes me feel like I’m in Aspen or the French Alps. It’s essentially a ski lodge in the middle of New York, fully decorated with wood, fireplaces, leather chairs. I’ve had many great nights there. I’m really excited to go again, and I think Ralph’s Club will be a perfect fit for my first night back there.