If you’re along for the Jaclyn Cosmetics roller coaster, hang on to your seatbelt, because the newest update proves the ride is far from over. Everyone is talking about Jaclyn Hill’s video response to lipstick complaints from customers, and TBH, the response to her latest statement has been super mixed. Fans like myself were thrilled to see Hill achieve her lifelong dream of launching her very own cosmetics brand, but after some reported issues with the brand’s first drop, no one quite knows how to feel. Can Hill’s apologies and honesty remedy the trust in her brand that customers have seemingly lost? Only time will tell.

If you aren’t as heavily invested in this saga as I am, allow me to bring you up to speed. The past month had beauty lovers patiently waiting for major YouTuber Jaclyn Hill to launch her long-awaited beauty brand, Jaclyn Cosmetics. She announced that the brand’s first drop would be a collection of 20 nude lipsticks, and fans were over the moon for the range of shades, luxe packaging, and clever names. I was ready to stan! But when the lipsticks finally showed up on the doorsteps of customers and influencers alike, many were less than pleased with the products they received. Reports of consumers claiming they found white fuzzies, hairs, holes, and more in their sometimes-slightly-melted lipstick bullets came pouring in on Twitter. (Elite Daily previously reached out to the Jaclyn Cosmetics team for comment on these reports but still has not heard back by the time of publication.) After a few days, Hill has now uploaded a video breaking down the drama and offering her take on the matter.

The video, simply titled "My Lipsticks," is currently the second-highest trending video on YouTube:

"I’m not gonna run away from this," Hill says right off the bat, before diving into further explanations of what went wrong and how she’ll remedy the issues at hand. "I know it’s taken me a couple days to get all my ducks in a row and get this video out for you guys, but I’ve been going though all the documentation, and on the phone with labs and chemists and the owner of my lab and entire team for several days, and doing an in-depth investigation to figure out exactly what’s going on, so that I can give you the most informed information as a brand owner," says Hill.

What followed this statement? A lot of explanations:

Hill claims the lipsticks are in no way expired, moldy, or hazardous, as many Twitter users have asserted, and says the products didn’t even go into mass production until the same month as the brand launch, so that they would be "fresh." Hill went on to offer potential explanations for the issues fans presented. The black holes? Hill claims these are the result of oxygen bubbles that didn’t make their way out when the lipstick was cooled in the bullet formation process. The white hairs on and in the bullets? Hill claims these are fibers from fuzzy gloves used by lab workers, because she claims rubber gloves would leave prints on the silver packaging. The gritty texture? Hill claims they made so many lipsticks that the vats couldn’t possibly break down all the raw materials quickly enough.

She also included a few fairly blurry screenshots of documents that she claimed further proved the brand’s validity and sanitation practices: 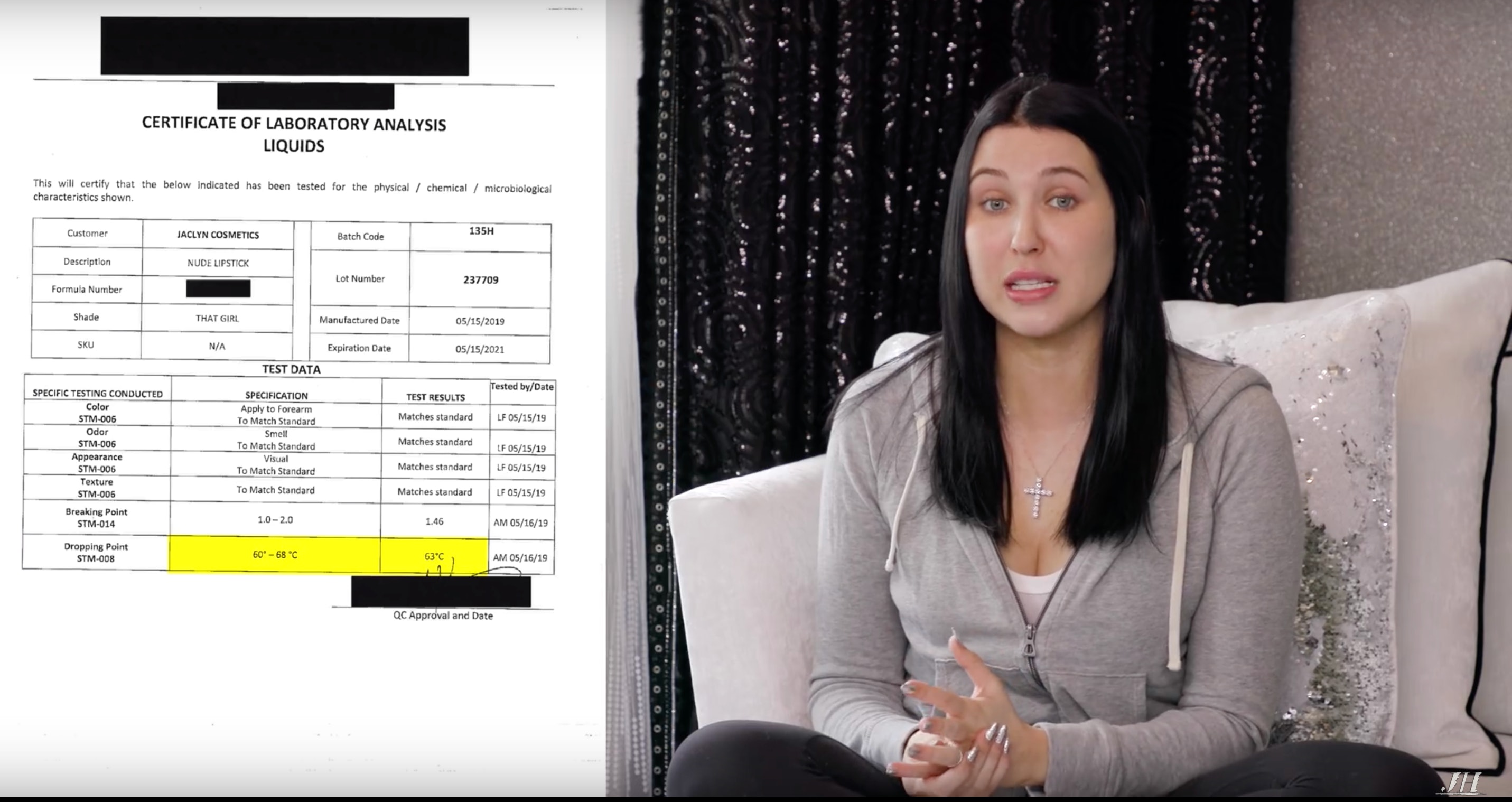 As a follower of many a beauty YouTuber, I’ve seen a myriad of apology and explanation videos in my day, and certain things about Hill’s struck me right off the bat. First, many a YouTuber has gone the ~crying will get me sympathy~ route in the midst of a scandal, and Hill is very matter-of-fact in her video, so I respect that she didn’t play that card. That said, Hill’s wording at points initially struck me as a bit confusing. While she makes statements like "I take full responsibility," and full-on acknowledges and apologizes for the first launch’s imperfections, at other points, some fans felt it didn’t sound as though she was really taking that responsibility for the brand’s faults:

Still, Hill has promised she would do her best to make things right:

Sparkly on the outside, buttery goodness on the inside.

In regard to all of the aforementioned issues, Hill says shoppers most definitely do not have to settle for what they’ve received. "If you’re experiencing that, please contact [email protected] Show us a photo of your product. We will send you not only a full refund, but we will also give you a brand new lipstick that does not have any of those issues that you’re concerned about," she says. She also says they’ll be formulating the lipsticks at a different lab from this point on.

Welcome to a world where ALL your dreams come true.

Easier said than done, though. According to Twitter, few fans felt Hill’s video made things right:

However, some were willing to forgive and forget:

What will happen next? Only time will tell. I’ve got my fingers crossed Hill can make things right, and we can all return to our safe, satisfied, lipstick-loving fantasy.