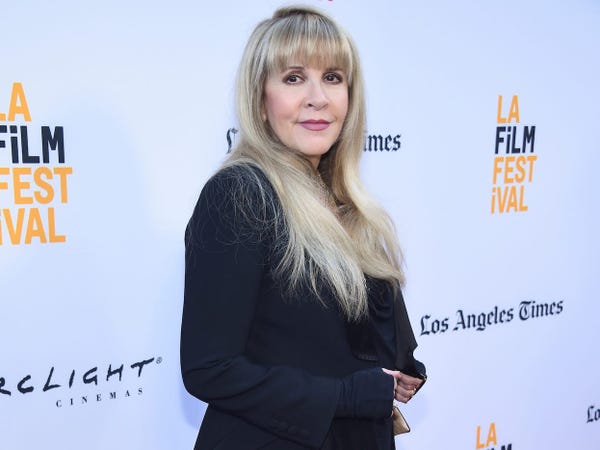 Stevie Nicks is opening up about her experience with Botox.

The two-time Rock and Roll Hall of Fame inductee recently spoke with Jenny Stevens of The Guardian for an interview about her life during the pandemic, her history with Fleetwood Mac, and her experience as a woman in music. She also spoke about beauty standards and aging as a celebrity, saying, "Oh God, the Botox."

"Let me tell you, Botox only makes you look like you're in a satanic cult," Nicks told The Guardian. "I only had it once and it destroyed my face for four months."

Back in 2013, the now 72-year-old shared a similar sentiment with The Telegraph.

"Botox makes everybody look like Satan's children," she told the publication. "You'd have to tie me down to get me to do it again."

Nicks also told interviewer Craig Mclean: "You have an 18-year-old daughter, right? You tell your daughter if she ever even thinks about Botox, you get me on the phone and I'll talk to her."

In place of Botox and other plastic surgery, Nicks seems to prefer natural beauty. In her interview with The Guardian, she reflected on her iconic fashion and signature beauty, saying: "Of course I thought that I was very pretty."

She added: "And that's something that I have said to a lot of my younger friends: No matter how beautiful you are, you're going to get older and you're not going to look like you did when you were 25. So roll with the punches."

Can’t wait to be back in New Orleans again! See you in a few weeks @jazzfest

Celebrities have been open about the various uses of Botox in the past. During a recent episode of Naomi Campbell's YouTube series, beauty influencer James Charles said he gets "preventative" Botox and lip filler.

"I have lip filler, I have Botox, I'm very open about it," Charles said. "I don't have too much of it, but my dad has literally the worst forehead wrinkles you could imagine on anybody, ever, so for me, my Botox was very much just preventative because my dad and I have a very, very similar face."

When Campbell responded by saying that Charles is "too young" for Botox, he replied: "There's not a lot in there. I can definitely still move everything around, and just a little bit of filler in the lips because it was needed."

In 2019, Chrissy Teigen also confirmed that she uses Botox by sharing a video of herself getting injections in her armpits to reduce sweating. As Insider's Gabby Landsverk reported at the time, Botox is the brand name for Botulinum toxin, or "a neurotoxic protein" that's commonly used as a "cosmetic treatment for smoothing out wrinkles."

"Although it's highly toxic and related to a serious bacterial infection called botulism, Botox is safe in clinical settings," Landsverk wrote. "Injecting it into muscles causes paralysis, which is why it works for wrinkle reduction by relaxing the facial muscles."

Recently, Botox has also been found to ease depression and migraines in some cases.