One quick look is all it takes to know with 100 percent certainty that Tatyana McFadden is really, really strong. Her arms are rippling with muscles—muscles that have not only propelled her to 17 Paralympics medals and 20 World Championships medals, but multiple first-place finishes in the Chicago, London, Boston, and New York marathons.

For the earliest years of McFadden’s life, those powerful arms—and her hands—were the only way she could walk.

She was born in St. Petersburg, Russia with spina bifida, a common congenital disability that leads to the spinal column not developing correctly in utero. In some cases, as with McFadden, it results in partial paralysis.

“Usually, babies with spina bifida get surgery immediately after birth to ensure the spinal cord and nerves are enclosed and protected, but for me, that wasn’t the case,” McFadden tells Women’s Health. “I had surgery at 21 days old. It was a miracle that I survived.”

With her birth mother unable to care for her, McFadden was placed in an orphanage that had no name and was only identified by a number: 13. “Lucky number 13,” says McFadden, who lived there until she was six years old.

“I didn’t have any medical treatment, no extra surgery, no schooling, no wheelchair—nothing,” she says. That may sound grim, but to McFadden, her experience influenced the woman she is today: an athlete with grit and determination, who is defined by her power and record-breaking accomplishments.

Happy national women’s fitness and health day. I’m so proud to be a strong andindependent woman. Life wasn’t always like this but what changed my life was getting involved with sports. I became healthier, which lead me to be more independent and be more involved in my community. Then I had a dream and a goal of wanting to be come an Olympic/Paralympic athlete @us_olympic_team @usparalympics which has lead me to this wonderful life. So women chase your dreams and love you who you are because you never know where life can lead you #letsgoplaces #toyota #nike

“Because of not having a wheelchair, I figured out how to get around just like the other kids,” McFadden says. She walked on her hands, using them to propel her body forward, and played without regard for her lower-body paralysis. “That shaped me today [into] someone who doesn’t see myself as different from anyone else.”

Her placement at orphanage number 13 also led to an encounter that would change her life.

‘It was fate at that moment‘

Everything changed in 1994 when McFadden’s soon-to-be adoptive mother—Deborah McFadden, who was working as commissioner of disabilities for the U.S. Department of Health—walked into her orphanage. 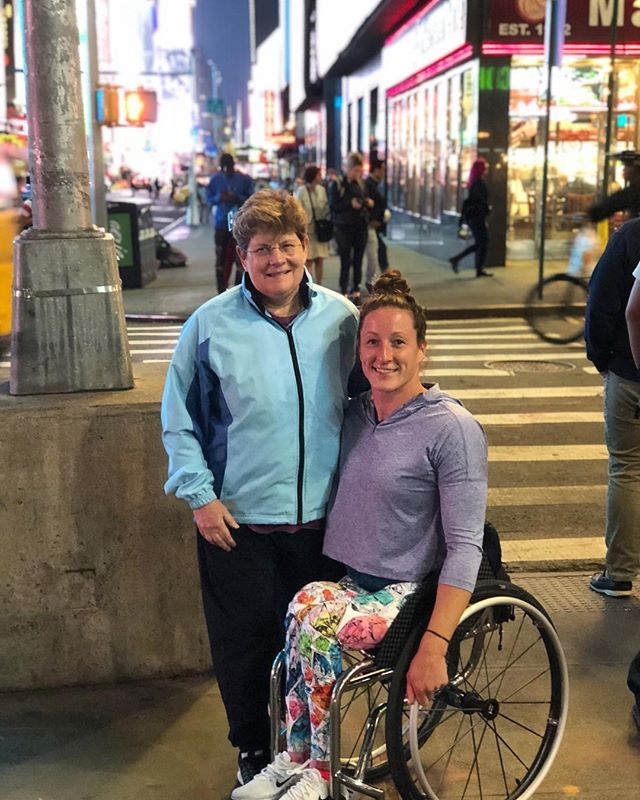 “I told everyone she was going to be my mom—it was just fate at that moment,” says McFadden about the moment she first saw Deborah.

Her life transformed once she left Russia and moved to Maryland to live with her new family. For the first time, McFadden went to school. She also received surgeries—more than a dozen—to straighten out her legs, which had atrophied behind her back. These surgeries allowed her to sit in a wheelchair.

‘Sports are the best way to heal‘

In her early years in America, McFadden was sick and anemic. Her parents’ mentality: Physical activity is the best way to heal. They encouraged her to play sports, and she took to them enthusiastically. 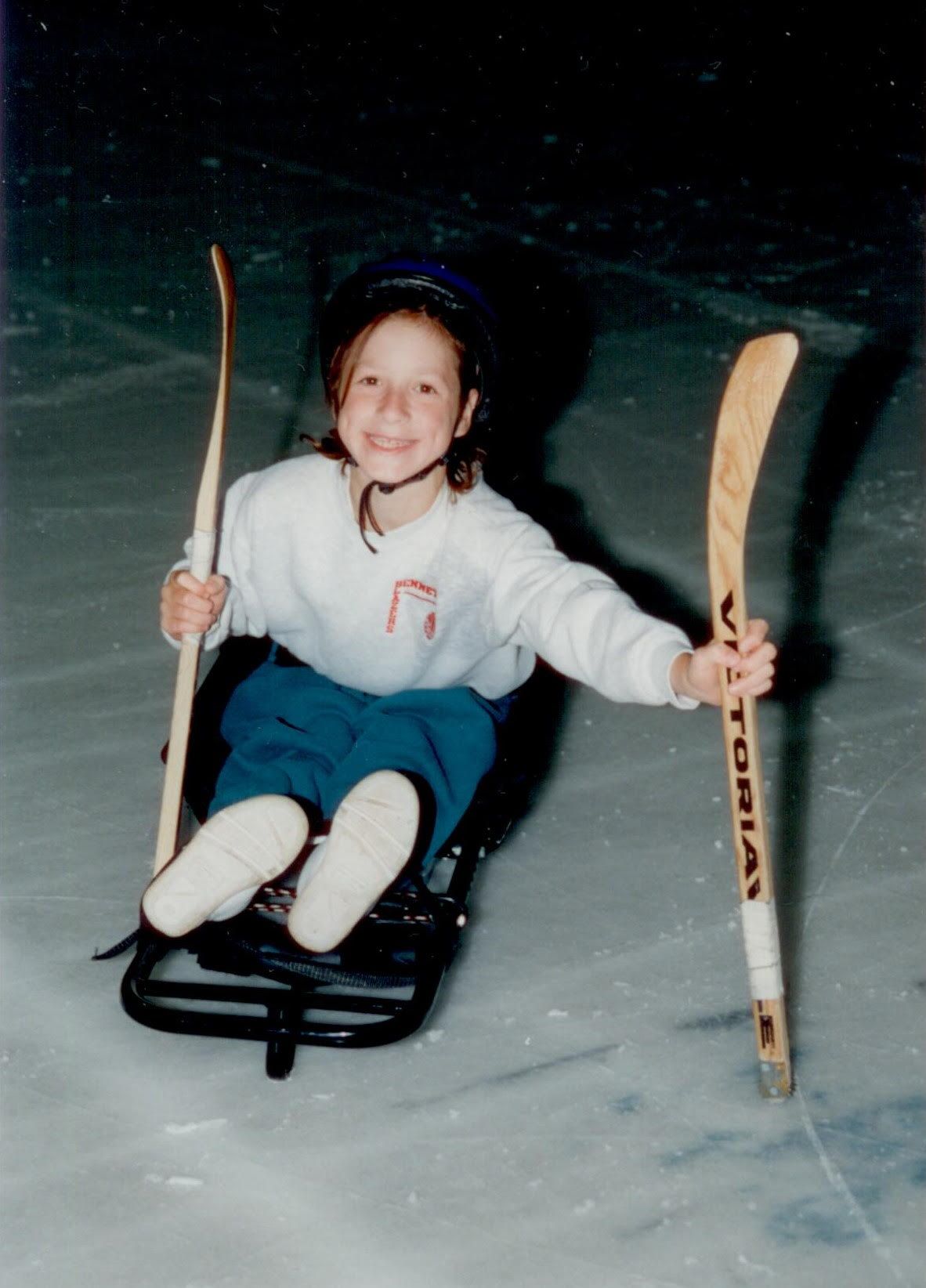 Her parents went with her every weekend to Baltimore for a local sports program, sitting for four hours every Friday, Saturday, and Sunday while McFadden played sports.

The effects of this athletic involvement were transformative, on both her health and independence. Sports and workouts made her strong. After several months, McFadden could push her wheelchair around for a full day at school, without the help of an aide.

‘I wanted to be an athlete‘

During her teenage years, McFadden’s obsession with sports grew. Her enthusiasm was fueled by her own participation, along with the thrill of watching nearby races and marathons.

“Once you get healthy and get your independence, that’s when you can have goals and dreams. For me, I wanted to be an athlete,” McFadden says. 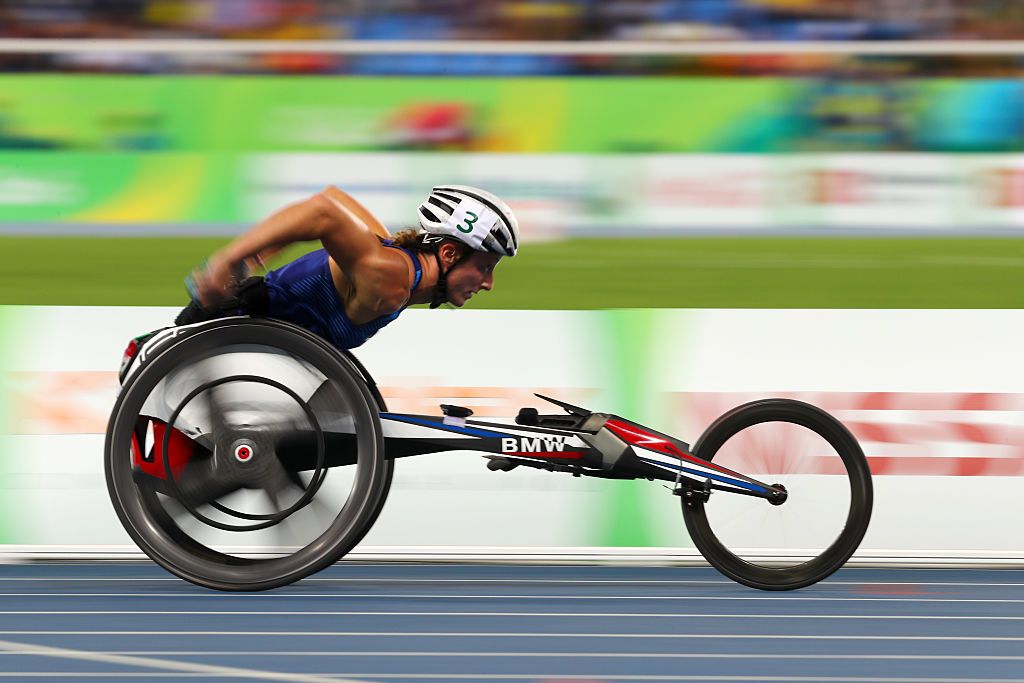 Her parents could see McFadden’s determination, passion, and enjoyment of sports. “They’ve always believed in me,” McFadden says. “Having their support means everything to me.”

At age 15, she became the youngest person to qualify for the Paralympics, going on to win both bronze and silver medals at the 2004 summer games in Athens, Greece. Since then, she’s participated in the Beijing 2008 Summer Paralympics (winning silver medals), the 2013 London Summer Olympics (where she won her first gold medals), and the 2016 Rio Olympics (more medals, in both gold and silver). 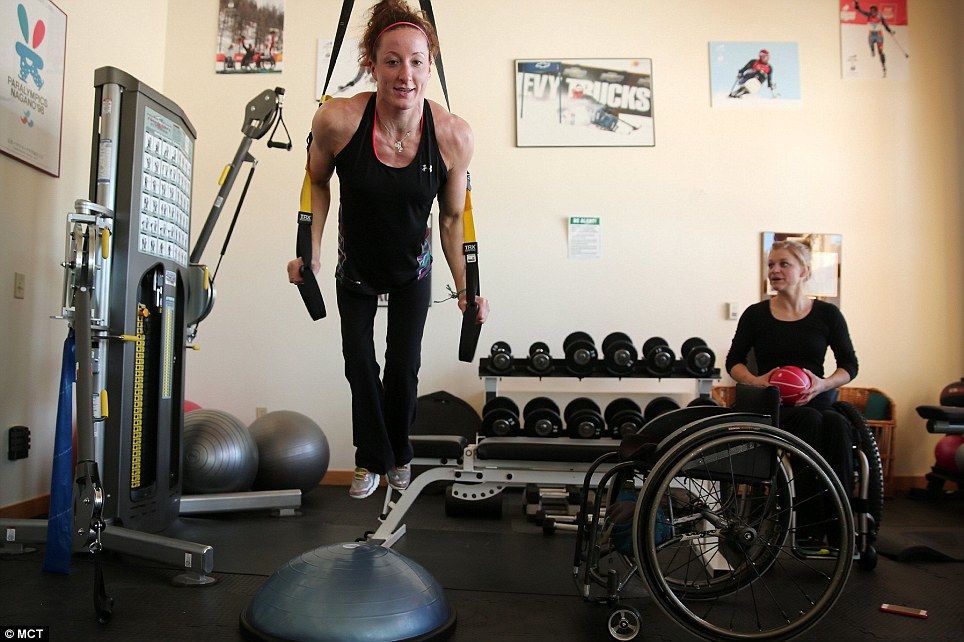 In 2009, she raced in her first marathon. “It was the hardest thing I’ve done in my life, shaping my body to be this marathoner,” says McFadden, who adds that she’s glad to have done it, and a better athlete as a result.

‘I work out every day‘ 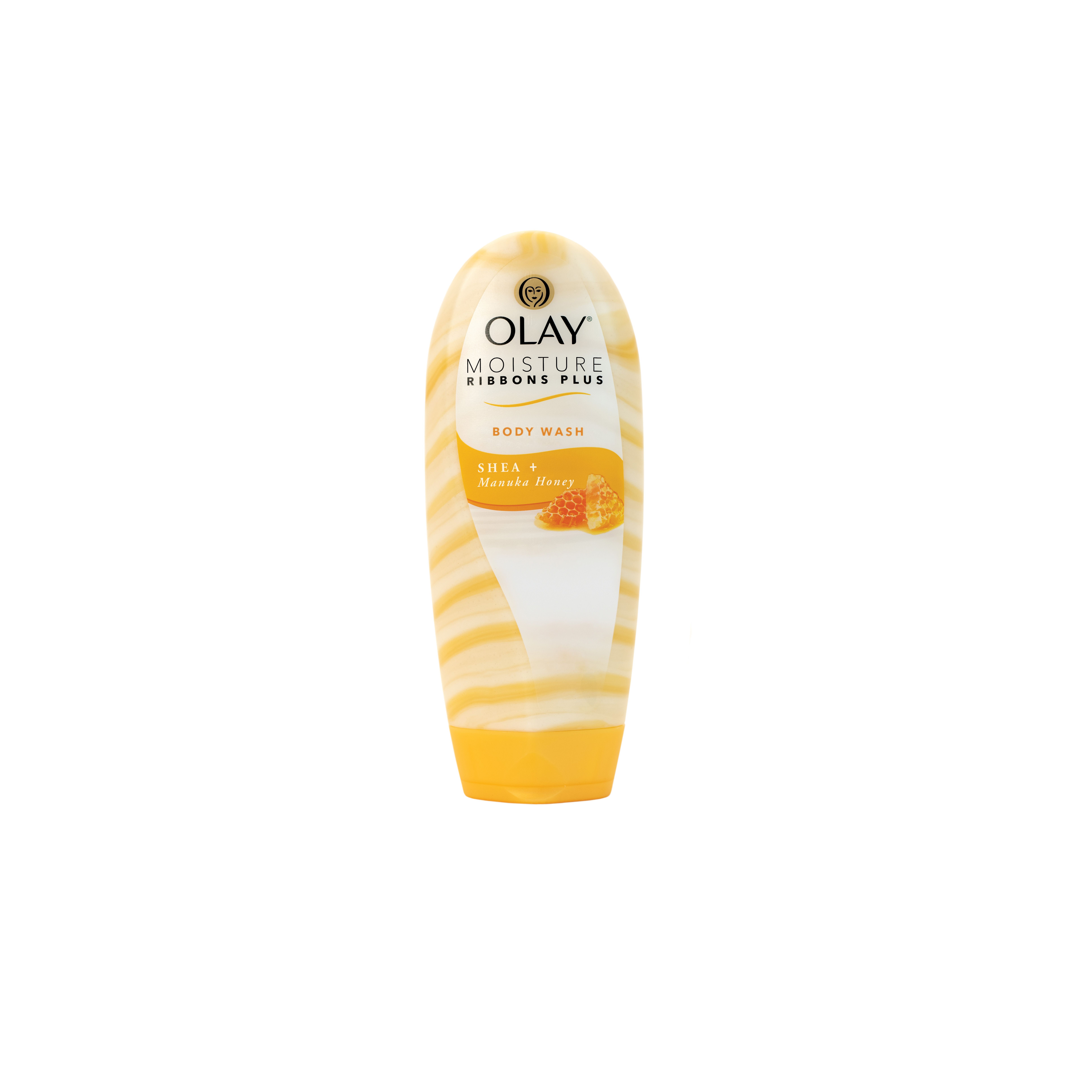 You don’t get McFadden’s arms—or win all those medals—by chance. She works out every day, year-round. That includes weight lifting several times a week, and during marathon training, putting in well over 100 miles each week. She’s planning to race in six marathons this year, adding Berlin and Tokyo to the usual four that she’s completed each year since she began marathoning in 2009.

Not only do your muscles feel it when you’re so active, but your skin feels, too. “I shower twice a day, because I workout twice usually,” she says, adding, “When I shower a lot, it feels like my skin is going to fall off.”

So when Olay invited her to take the Olay Two-Week Body Wash Challenge, she was thrilled. Her skin tends to feel dry and then get oily as the day goes on, and she found that using Olay Ribbons Body Wash in Shea + Manuka Honeyhelps her lock in moisture without leaving behind a greasy feeling. “It’s great to have something that keeps your skin nice and smooth,” she says. 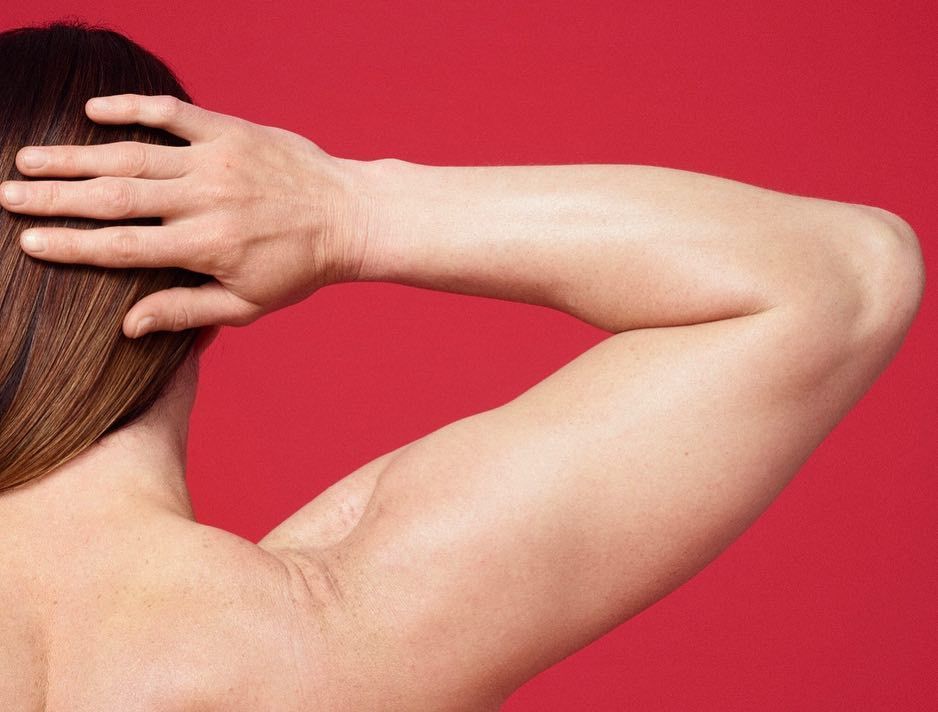 ‘Sports brought out in me that I’m beautiful‘

Growing up, McFadden didn’t see many representations of people who looked like her. “As someone with a disability, it was hard growing up. I do stick out. You can see that I have a disability,” she says. “Sports really brought it out to me that I am beautiful and I have self-worth.”

Now, she wants to ensure others have that same realization. “By the time I retire, I want to leave a legacy of programs I’ve started, wheelchairs I’ve donated, and people who’ve I’ve helped get involved with sports,” says McFadden. She currently serves on board of Spina Bifida of Illinois, and in 2013, advocated for the passage of federal legislation mandating that students with disability have access to sports in school. 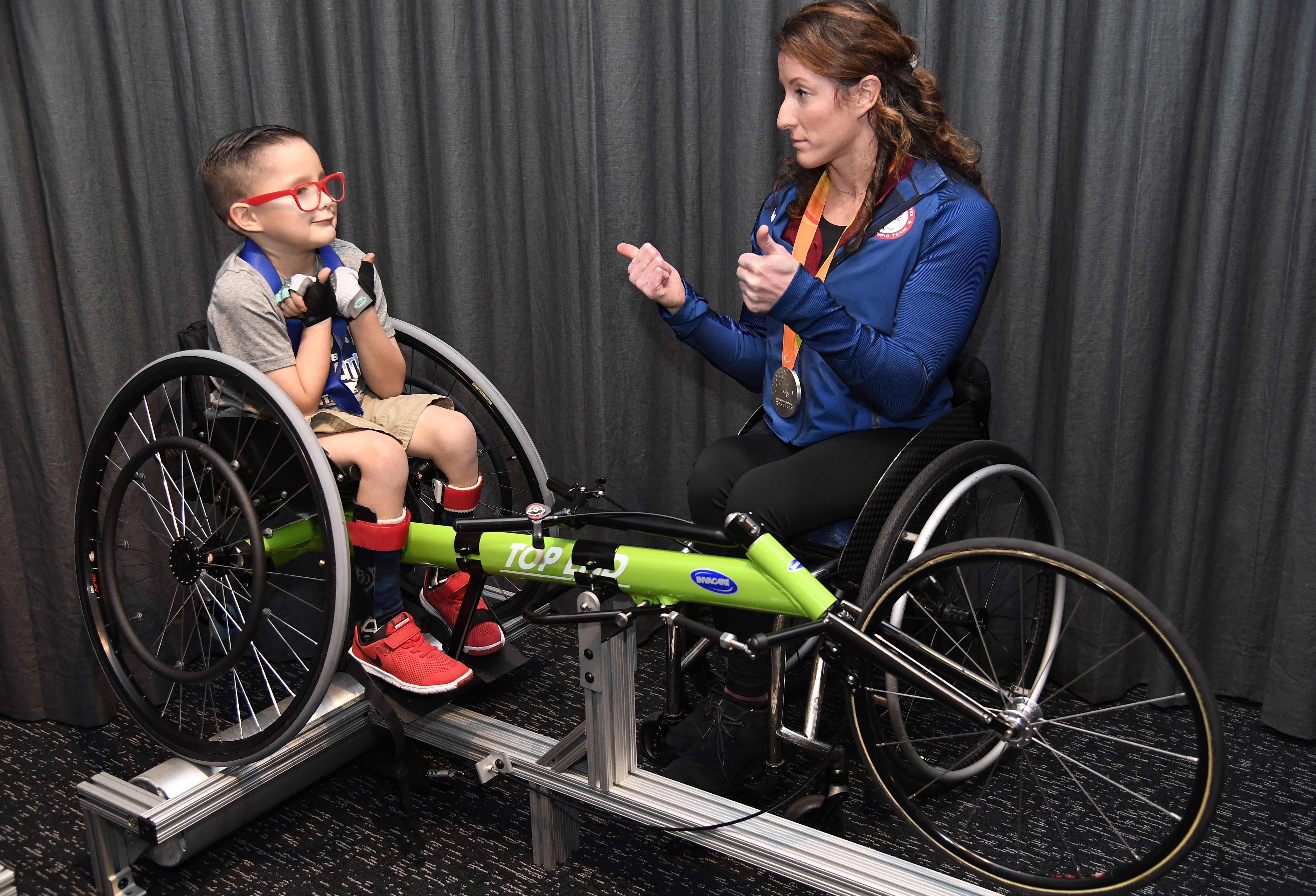 She’s also a lifelong Girl Scout and contributes to Right to Play, Boys and Girls Clubs, and the Bennett Blazers (the adaptive sports program where McFadden first participated in sports as a child in Maryland).

“I want to leave that legacy so that the next person coming up has all those opportunities. Everything is growing, but it’s always important to keep it rolling,” she says.