A Sixties dream to die for… this thriller lifts lid on dark side of Swinging London: BRIAN VINER reviews Last Night In Soho

Those rose-tinted glasses through which we romanticise the past badly skew our vision. That is the message of Last Night In Soho, Edgar Wright’s wonderfully deft mix of horror film and period thriller, set in London partly in the present day and partly in the ‘Swinging Sixties’.

Wright made his name with the so-called ‘Cornetto trilogy’ of comedies (Shaun Of The Dead, Hot Fuzz and The World’s End). But he has since made a terrific action film, 2017’s Baby Driver, and now proves himself a master of psychological horror. Last Night In Soho — which Wright wrote with Krysty Wilson-Cairns — exerts a fierce grip from the start and never lets go.

Not only that, but it affords us our last look at the glorious Diana Rigg, who died aged 82 shortly after filming ended. It also has parts for veterans Terence Stamp, 83, and Rita Tushingham, 79. 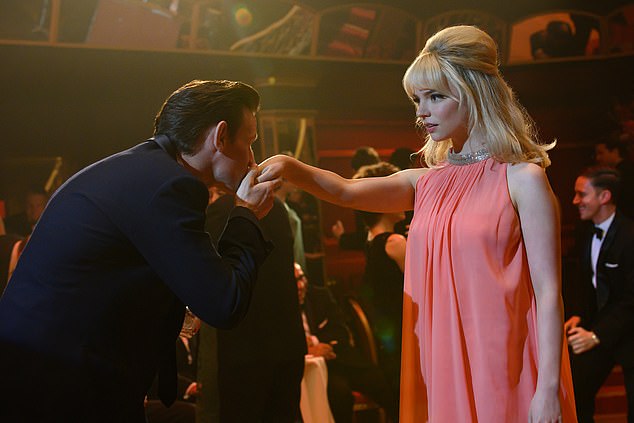 Innocents snared: An aspiring nightclub singer called Sandie (the superb Anya Taylor-Joy), whose own dreams start coming true when a roguish charmer (Matt Smith) gets her an audition

Sixties iconography is everywhere in this movie, including both the cast list and the title (named after a 1968 single by Dave Dee, Dozy, Beaky, Mick and Tich). But it begins in the present, in a bedroom in Cornwall.

Eloise (the engaging New Zealand actress Thomasin McKenzie, making a decent fist of her West Country vowels) is dancing to A World Without Love, the 1964 song by Peter and Gordon.

A whisk around the room shows us that she’s in love with the Sixties. And her dearest wish is to move to London to study fashion, doubtless so she might one day follow in the footsteps of Mary Quant.

A letter arrives. Thrillingly, Ellie has been accepted into a fashion college on the edge of Soho. Her grandmother (Tushingham) is thrilled too but warns her: ‘London can be a lot.’ This line — London can be a lot — might almost be the film’s subtitle. 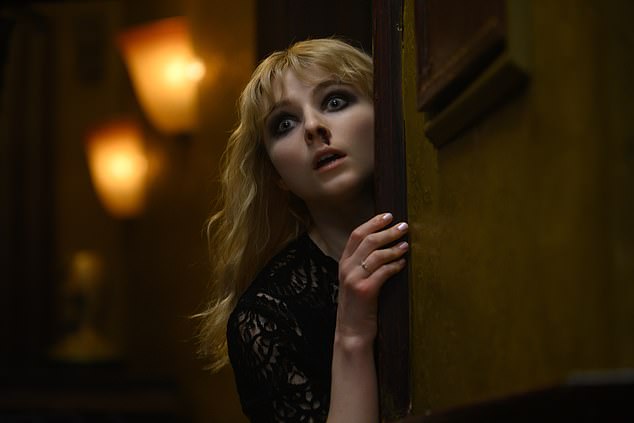 Pictured: Eloise (the engaging New Zealand actress Thomasin McKenzie, pictured) has been accepted into a fashion college on the edge of Soho

It is repeated several times, by different characters, and perhaps reflects the experiences of the director, who grew up in sleepy Wells, Somerset. London, it appears, was too much for Ellie’s mother, who died years earlier by her own hand. While a strong part of Ellie’s motivation is to make her dead mother proud, her gran was right — London can be a lot.

A lecherous cab driver is her first taste of city life and when she moves into a hall of residence, her country mouse ways are soon being mocked by her fellow students, led by her spiteful, entitled roommate Jocasta (Synnove Karlsen).

So unworldly, impressionable Ellie escapes to a nearby rooming house owned by elderly Miss Collins (Rigg), who calls her ‘dearie’ and seems like a better bet than Jocasta.

That night, Ellie dreams vividly of the Sixties. She is whisked to the Cafe de Paris, where Cilla Black is in cabaret. 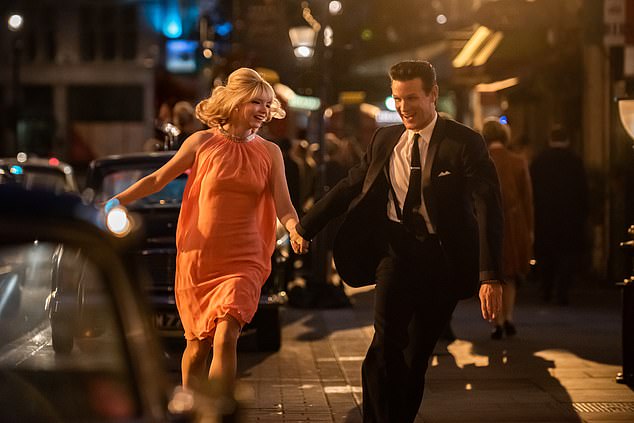 It turns out Soho in the Sixties didn’t swing, it suppurated. Sexual predators didn’t even lurk in the shadows, they operated in the open. Through an ever-present fug of cigarette smoke, the threat of violence shimmered

There, she acquires a kind of alter ego — an aspiring nightclub singer called Sandie (the superb Anya Taylor-Joy), whose own dreams start coming true when a roguish charmer (Matt Smith) gets her an audition. Sandie is on her way up.

Back in the real world, these exciting visions inspire Ellie to design clever retro dresses; in parallel with Sandie, she too is on her way up. She gets a job in a pub with a sympathetic landlady.

And a friendly classmate, John (Michael Ajao), clearly fancies her rotten and looks like Mr Right. Maybe this isn’t a world without love, after all. But the other Mr Wright has a series of shocks in store, for her and for us.

It turns out Soho in the Sixties didn’t swing, it suppurated. Sexual predators didn’t even lurk in the shadows, they operated in the open. Through an ever-present fug of cigarette smoke, the threat of violence shimmered.

Sandie isn’t on the way up, she’s on the way down. And as her life becomes a nightmare, so does Ellie’s. She becomes haunted by Sandie, who, she is convinced, lived in the very house in which she is renting a room.

Visions of a long-ago murder, to which the key appears to be a louche old man (Stamp), lead her to the police. Just like her gran, they tell her ‘London can be a lot’.

Well, this captivating film, too, is a lot. The ending is perhaps a little overwrought, with Wright reaching for horror movie tropes a bit too enthusiastically, but it is ingeniously managed from start very nearly to finish — with a Sixties soundtrack, and let me choose my words carefully, to die for.

If the cinematic double-bill was still a thing, Last Night In Soho could pair up rather inventively with Quant, Sadie Frost’s enjoyable documentary about the pioneering fashion designer who, as a schoolgirl, used to hitch up her skirt to run for the bus, and later parlayed that experience into her most celebrated blueprint.

In the early 80s, as a hotel concierge in Paris, I once had to buy a hairdryer for Quant, who tipped me generously. It was easily my biggest claim to fame at the time.

Hers, more seismically, were the mini skirt and a wildly successful make-up range conceived when she realised that ‘Fifties faces didn’t match Sixties lives’.

If Last Night in Soho suggests that women back then weren’t as liberated as we like to think, nobody did more to make them look liberated than the inspirational Mary Quant.

Long before it was a film, Passing (★★★✩✩ 12A, 98 mins) was a novel. Published in 1929, it was written by Nella Larsen, a mixed-race woman intrigued by issues of racial and sexual identity.

And now here’s the film, stylishly shot in black and white and a debut feature for Rebecca Hall, whose late father, Sir Peter Hall, also knew a bit about directing.

It’s slow-moving but kind of intoxicating, with dialogue that sometimes sounds stagey, and reminded me more than once of A Streetcar Named Desire. But it is very pleasing on the eye, and actually the ear, too; once you get used to it. 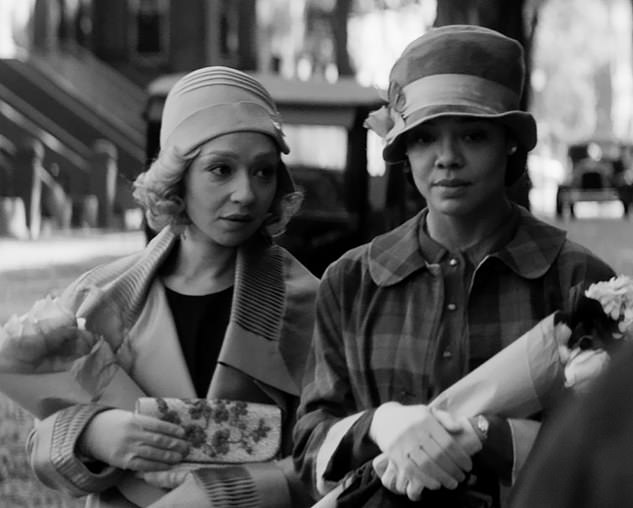 Tessa Thompson and Ruth Negga (pictured) are both wonderful as Irene and Clare, childhood friends who accidentally encounter each other a decade later in Jazz Age New York

Moreover, Tessa Thompson and Ruth Negga are both wonderful as Irene and Clare, childhood friends who accidentally encounter each other a decade later in Jazz Age New York.

Both women are mixed-race but Irene lives in Harlem as a black woman, married to a black doctor, while Clare passes herself off as white and is married to unreconstructed racist John (Alexander Skarsgard).

Perhaps the key line, as sexual desire also begins to flicker within their re-ignited friendship, comes when Irene says: ‘We’re all of us passing for something or other.’ No matter what colour we are or what society we live in, not many of us can argue with that.

Antlers (★★✩✩✩, 15, 99 mins), directed by Scott Cooper and produced by Guillermo del Toro, is also about people who are not what they seem. It’s a laboured horror film, layered with metaphors about abuse and racism, set in smalltown Oregon.

A strong cast includes Jesse Plemons as the sheriff and Keri Russell as his sister, a teacher convinced that a vulnerable pupil of hers has a monstrous supernatural secret.

However, it’s young Jeremy T. Thomas, as the boy, who steals the show. Only it’s not really a show worth stealing.

Both films are in cinemas now. Passing will also stream on Netflix from November 10.