In a world where celeb couples break up faster than you can say “maybe just don’t get married,” Justin Timberlake and Jessica Biel have always been pretty damn solid. These two met in 2007 and—aside from one brief split and an awkward scandal involving hand-holding—they have been together for over a decade. Or in layman’s terms, 9 years more than the average celebrity relationship. A lot’s happened during that time (including a secret baby and a secret vow renewal), so let’s catch up with a brief timeline, yes?

Justin and Jessica meet at a random birthday party in 2007 and just connect. “We met and got talking,” Justin reveals during a press conference back in 2012. “Afterward, I asked my friend if I could call her and ask her out. My friend called Jessica and Jessica said yes, and so I called her.”

Here’s Jessica talking about the fated day, saying, “We really technically met and had a conversation when I was invited to a birthday party that Justin was throwing for a friend of his.”

Psst: At the time, a source tells People, “She’s the coolest chick ever. He wants to be with her all the time. He’s ready to be serious.”

Jessica and Justin briefly split up, and their rep confirms the news to People, saying, “Addressing the media speculation regarding Jessica Biel and Justin Timberlake’s relationship, we are confirming that they mutually have decided to part ways. The two remain friends and continue to hold the highest level of love and respect for each other.”

Justin and Jessica get engaged! It goes down in Jackson, Wyoming, and a source tells Us Weekly that “Justin knows how much she loves snowboarding and the mountains, so it was the perfect place.” Apparently, fans think the proposal inspired this song:

Jessica eventually talks about the proposal on The Late Late Show, so here’s the full story in her words:

“We were in Montana on a piece of property that we owned at the time. We had snowboarded all day. It was in the middle of the winter. Waist-high snow. We were [in] head-to-toe snowboarding outfits — hats, gloves, everything. And we go up to the property to just check out how the foundation is looking. And all of a sudden, he gets down onto his knees and just sinks into the snow. And then he looks up at me and holds up this ring and it was the most lovely, surprising, hilarious … “

Jessica and Justin exchange vows in Italy and Jessica wears a gorgeous pink dress. She describes the wedding as a “total fantasy experience,” and apparently, Justin serenades her as she walked down the aisle. 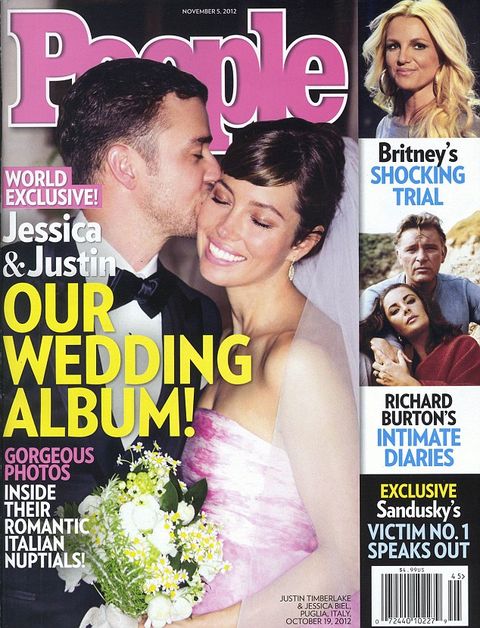 Justin shares a bunch of cute (and pretty rare) photos of his family life in celebration of Father’s Day.

Jessica shares this sweet message to Justin and melts everyone’s heart in the process. Even mine, which has been frozen since 2016.

Justin causes a lot of side eyes by using the #TIMESUP hashtag while talking about Jessica being hot. A true yikes moment.

Jessica calls Justin the “man of my blue ocean dreams” in a truly lovely Instagram post for his birthday:

A couple of months later, Justin calls Jessica his “partner in this thing called life” and shares some cute throwbacks:

I think we can all agree that Jessica and Justin completely nail couples Halloween costumes:

The Sun publishes photos of Justin holding hands with his costar Alisha Wainwright in New Orleans. In a video from the incident, Alisha can be seen resting her hands on Justin’s knee—and an eyewitness says, “They were smiling and laughing. At one stage, he grabbed her hand and rested it on his knee. She then gently started stroking his leg. Then he clutched her hand with both of his and was playing with her hands.”