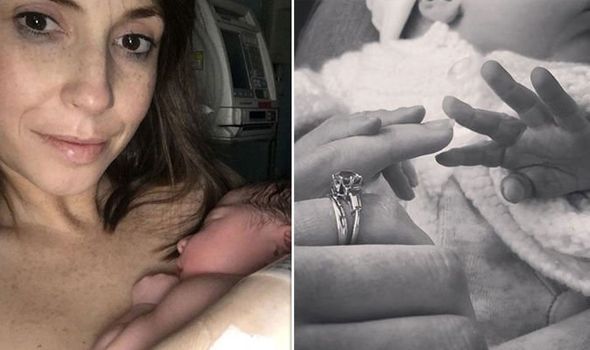 The One Show host Alex Jones, 42, announced she had given birth to her newborn during tonight’s live episode of The One Show.

The presenter said she gave birth to her second child last Monday and has named him Kit Thomson.

Ahead of revealing the name, she told her co-host Matt Baker and stand in host Angela Scanlon they were enjoying their time at home as a family of four.

Alex also joked her two-year-old son Teddy believed she was going to call his new sibling Thomas after Thomas the Tank Engine.

Following her on air announcement, Alex took to Instagram to give fans a glimpse of her newborn.

The presenter shared a picture of her holding on to her newborn’s hand while sharing a glimpse of his face.

“Teddy, Charlie and I are absolutely besotted by baby brother and are enjoying this special time as we get used to being a foursome and generally breathing in that lovely newborn smell!

“A huge thank you to the midwives at the birth centre, Queen Charlotte Hospital for everything you did for us. #nhsheroes.”