Black Widow may take place in the past, at least as far as the Marvel timeline is considered, but that doesn’t mean it won’t impact the future of the MCU. The movie focuses on Natasha’s life in between Captain America: Civil War and Avengers: Infinity War, and explores her fraught past.

It has garnered positive reviews, but many bemoaned the time it took to get Natasha into the spotlight, and that while Black Widow makes some effort, it falls short in really digging into how she became who she is. Similarly, it over-hyped some reveals, leaving viewers disappointed.

But one thing seemingly everyone could agree on was that David Harbour’s Alexei, aka Red Guardian, was a hammy-but-loveable character, and we hope to see more of him in the MCU. Beyond this, though, fans were left scratching their heads at a little bit of dialogue.

We catch up with Red Guardian in prison, where he’s waxing poetic about a battle against Captain America in which he came out victorious. Later, however, when he reunites with Natasha and asks if Cap ever spoke of him, she blanks him, leaving him deflated.

This led to fans wondering how, and indeed if, the two ‘superheroes’ ever crossed paths. So we scoured the internet for the best, and most believable, theories to answer that question.

Red Guardian is a liar 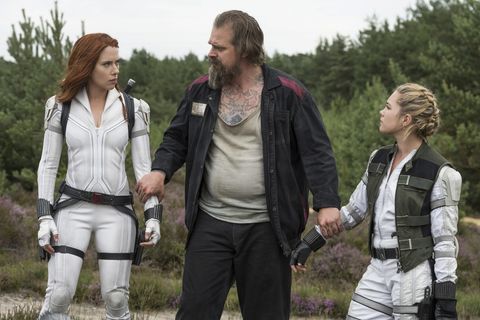 The prevailing, and most likely to be true, theory is that Red Guardian is simply telling tall tales. This is the theory David Harbour himself touted.

In a surprisingly earnest moment from the otherwise comic-relief character, Alexei reveals that after he returned from Ohio with the SHIELD technology, he thought he would be the poster superhero for the USSR.

Instead, he was jailed and never got to live to the heights of glory he was promised. So to pass the time in prison, he tells the story of his imagined heyday. Or, perhaps, he did at some point fight Captain America but either only very briefly, or – more likely – lost to him.

He did fight Captain America, sort of…

Another theory connects Black Widow to The Falcon and the Winter Soldier, predicated on a reveal in the TV series that Captain America isn’t the only person to be superhero-ing it up thanks to the super serum.

Isaiah Bradley, introduced to the MCU via The Falcon and the Winter Soldier is a Korean War veteran who was unwillingly subjected to human testing of the Super Soldier Serum. He survived the experiment, and after failing to kill the Winter Soldier in South Korea, the government eventually feared the ramifications of an African-American super-soldier during the civil rights movement.

Isaiah spent three decades in prison experimented on by the US government and HYDRA, but was released in the 1980s. This lines up with the timing that Red Guardian claims he battled Captain America, meaning it could very well have been Isaiah, not Steve Rogers, he fought.

We’ve had it confirmed that Steve Rogers’ journeys in the past caused a branch in the timeline, so this theory is really out there, but some have speculated that the version of Captain America that Red Guardian fought was the ‘old’ Cap who had gone back in time, rather than the ‘present day’ Captain America: Civil War Steve Rogers whom Natasha would know.

This would explain why, if Red Guardian was telling the truth, Natasha wouldn’t confirm that Steve had ever mentioned Alexei. After all, it would’ve been a different Steve.

Another unlikely but interesting theory is that Alexei, a staunch communist, was simply doing his bit to further pro-USSR propaganda by claiming, falsely, that he beat Captain America.

Thus, his question was more about whether the propaganda worked and, second, whether or not the US was engaging in their own version of propaganda against the Red Guardian.