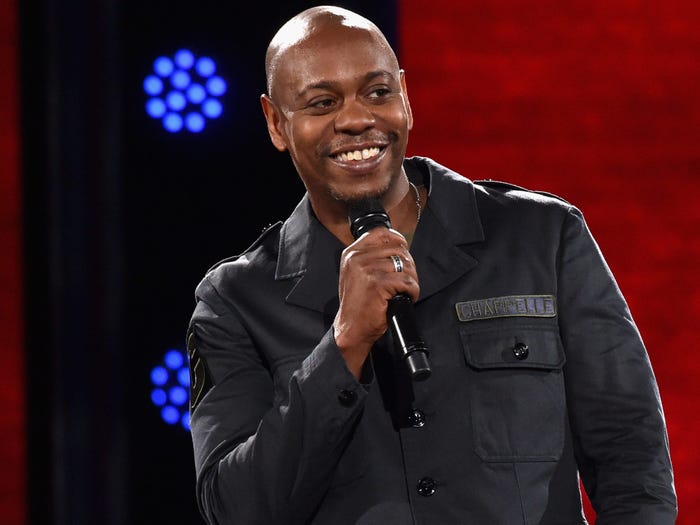 After one of the most divisive presidential elections in US history, Dave Chappelle used his "Saturday Night Live" hosting gig to encourage Americans to come together.

Hours after Democratic nominee Joe Biden took the stage in his hometown of Wilmington, Delaware, to give his first speech as president-elect on Saturday, the 47-year-old stand-up comedian took the Studio 8H stage to deliver his monologue.

Chappelle began by saying that he'd spent the day thinking about his great-grandfather, who was born enslaved in South Carolina.

"I wish I could see him now," Chappelle said. "And I wish he could see me. Because I wonder what he would say."

The comedian then used the seemingly somber moment to point out that both HBO Max and Netflix are streaming his Comedy Central sketch series, "Chappelle's Show," which ran from 2003 to 2006, without paying him.

"If he could see me now, he'd probably be like, 'This n—- got bought and sold more than I have,'" he joked.

In his wide-ranging monologue, Chappelle also dove into the current COVID-19 pandemic, sarcastically noting that there was a "mass shooting every week" before the coronavirus pandemic.

"Thank God for COVID," he said, adding, "Something had to lock these murderous whites up, keep them in the house."

Chappelle eventually segued into President Donald Trump's handling of the pandemic, smoking a cigarette between jokes.

The president later claimed that the statement was meant as "sarcasm" rather than a serious suggestion.

Toward the end of his monologue, Chappelle suggested that Americans on all sides of the political spectrum "find a way to forgive each other."