Bella Hadid didn’t hold back when slamming Lil Pump for endorsing Trump in the 2020 election. The model called the rapper a ‘loser’ and ‘so irresponsible’ in a scathing Instagram post.

Bella Hadid, 24, is making her voice heard. After rapper Lil Pump, 20, publicly endorsed President Donald Trump, 75, and posted an Instagram photo of himself in front of a Trump flag, Bella reposted the photo on her Instagram Story and called him out for supporting Trump. “This is so irresponsible. This kid is a loser,” she wrote. “Anwys I’m going to Mars… You guys want anything?”

Meanwhile, Lil Pump and other rappers like Lil Wayne, 38, have received major backlash for showing their support for Trump. Despite Lil Pump’s endorsement, Trump didn’t seem to respect Lil Pump enough to remember his own name. Trump called the rapper “Little Pimp” when introducing him at a Michigan rally on Nov. 2.

Bella also reposted the video of Trump mispronouncing Lil Pump’s name and wrote, “This is literally the cherry on top. Imagine trying so hard to be famous, that you publicly endorse a president just for clout. And then… he calls you little pimp.” 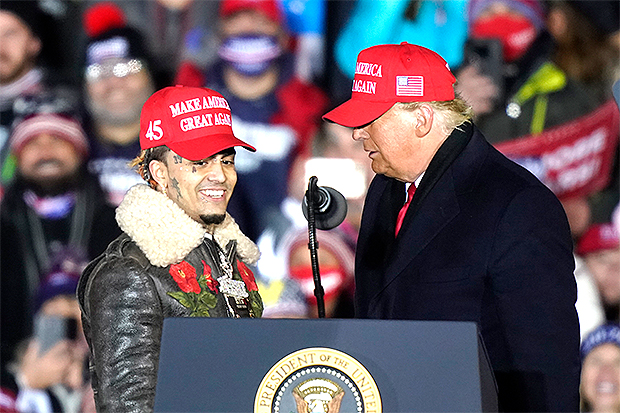 Bella had been a vocal supporter of former Vice President Joe Biden, 77, who is running against Trump as the Democratic candidate for President of the United States. On Election Day, Bella posted an Instagram photo of herself with her mom, Yolanda Hadid, 56. “Took my mama to vote for the first time today!!! She became an American citizen just recently and this year she was so determined to get out and vote. I am so proud of her!!!”

Took my mama to vote for the first time today!!! She became an American citizen just recently # and this year she was so determined to get out and vote. I am so proud of her!!! Wearing our best Blues!!!!!?????

The day before the election, the supermodel pleaded with her 35 million Instagram followers in a heartfelt message to “please be on the right side of history. There is only ONE party that will be receptive to the work and advocacy that the thought leaders of our generations, and past generations have been fighting for… I want to live in a welcoming, respectful, helpful, smart, responsible, and kind America. What we’re living through right now, under Donald Trump’s presidency, is the exact opposite.”