Beyoncé and Jay-Z honored Tiffany & Co. with their presence in the diamond company’s fall 2021 About Love campaign. The power couple, dressed in black, appears in front of Jean-Michel Basquiat’s Equals Pi (1982) painting in images shot by Mason Poole. Bey notably wears a yellow Tiffany Diamond, which weighs 128.54 carats and has only been worn by three other people, including Audrey Hepburn and Lady Gaga. 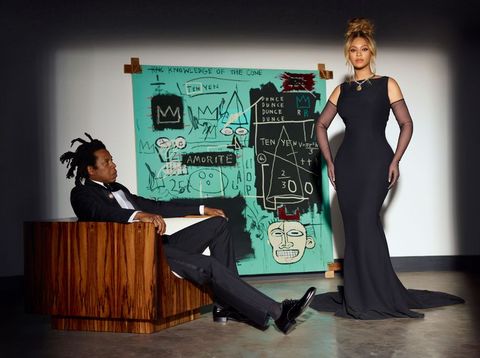 The campaign also includes a film featuring Bey singing “Moon River” from Breakfast at Tiffany’s, directed by Emmanuel Adjei. Alexandre Arnault, Tiffany & Co.’s executive vice president of product and communications, released a statement about Beyoncé and Jay-Z’s campaign. “Beyoncé and Jay-Z are the epitome of the modern love story,” Alexandre said. “As a brand that has always stood for love, strength and self-expression, we could not think of a more iconic couple that better represents Tiffany’s values. We are honored to have the Carters as a part of the Tiffany family.”

The Carters’ Tiffany campaign comes shortly after Beyoncé gave a rare interview to Harper’s Bazaar for its September issue. She spoke about her hopes for her 40s as she enters that new decade on September 4: