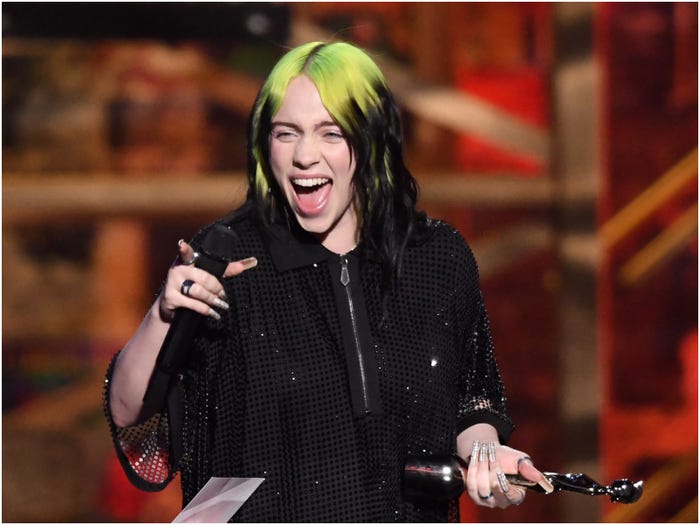 Billie Eilish responded to fans telling her to get a new hair color in a series of Instagram comments and stories.

The singer's green roots are an iconic part of her look, and she's worn the color for a while now, but fans have persistently teased her about her green hair. One fan commented on one of her Instagram posts, writing that her "grass head needs a new color." They suggested black.

But Eilish responded by writing: "It's called not being depressed anymore pls just be happy for me."

The "Bad Guy" singer also commented: "This is the longest I've had the same hair color since I was 13 & that's on mental stability and growth leave me alone lsjdkksjdjs"

Taking the jests in good spirit, however, Eilish took to her Instagram stories to properly and humorously address being teased about her green hair.

But Eilish also revealed that despite this being the longest she's ever had one hair color, the green roots won't be around forever.

Eilish continued: "I'm changing it after the doc comes out. It'll be the end of an era, I'ma give you a new era… I have announcements to make, I got some shit to put out."

For now, Eilish jokingly asked fans to "shut the f— up" about her hair: "Leave me alone, let me live with my f—ing hair that I've had for way too long, okay?"

The doc Eilish referenced is the Apple TV documentary coming out in February 2021 that follows her life while she creates her debut album, "When We All Fall Asleep, Where Do We Go?" The documentary, titled "Billie Eilish: The World's a Little Blurry" is helmed by Emmy award-winning documentarian R.J. Cutler and will also feature Eilish' brother, Finneas O'Connell.

It remains to be seen what hair color Eilish will switch to but she has previously sported various shades of black, blue, purple, and grey.