Britney Spears’ kids are teenagers now, but she looked back on their younger years with a throwback Instagram post, where she recalled her days as a young mom on tour.

Britney Spears was just 24 years old when she had her first son, Sean Preston, in Sept. 2005. Almost exactly one year later, she gave birth to her second son, Jayden James. In May 2007, less than a year after having Jayden, Britney went back on tour for the first time since becoming a mom, which was followed by the lengthier Circus tour in 2009. On May 26, she posted a throwback Instagram photo of herself with Sean and Jayden as toddlers, and shared memories of being on tour as such a young mom.

“I had my babies very young,” Britney admitted. “At all the pools we went to on tours, all the babies flocked to me because I always brought the most toys. I really am a baby mamma.” In the picture, Brit is wearing a white bikini and sitting at the end of the pool, while Sean and Jayden are beside her. The boys are wearing floaties on their arms and baseball caps while dipping their feet in the water.

Of course, this was quite a long time ago now. Now, Sean is 15 years old and Jayden is 14, and both boys are taller than their mom. Although they don’t appear on Britney’s social media that often, a rare family photo of the teens with the pop star surfaced in February. The group appeared to be hiking at the time that the photo was taken.

Britney had Sean and Preston with Kevin Federline, who she got engaged to in July 2004 and married less than three months later. The marriage was short-lived, though, as Britney filed for divorce in Nov. 2006, just two months after Jayden was born. 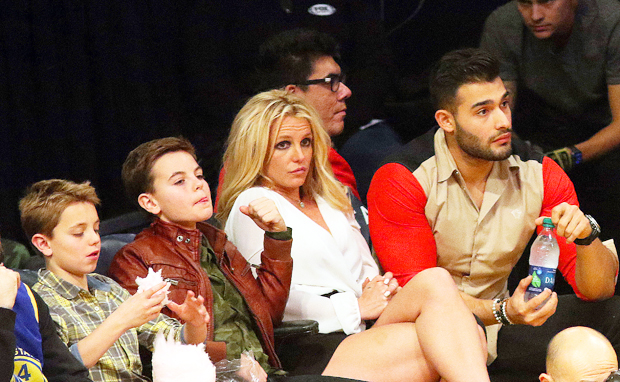 Amidst Britney’s personal struggles around this time, she lost physical custody of the boys to Kevin in 2007. Kevin was granted sole physical and legal custody of Sean and Jayden in Jan. 2008, following an incident that left Britney hospitalized on a 5150 involuntary psychiatric hold. This was when Britney was also placed under a conservatorship, which she remains under to this day. However, Britney is in the midst of a legal battle to try and have her father removed as her co-conservator. Rather, she wants Jodi Montgomery to be her sole conservator. She’s expected to appear in court in June regarding this matter.

Although Britney eventually got 50/50 custody again, she and Kevin came to a new arrangement in Sept. 2019. At that time, it was decided that he would have 70 percent custody, while Britney would get 30 percent.