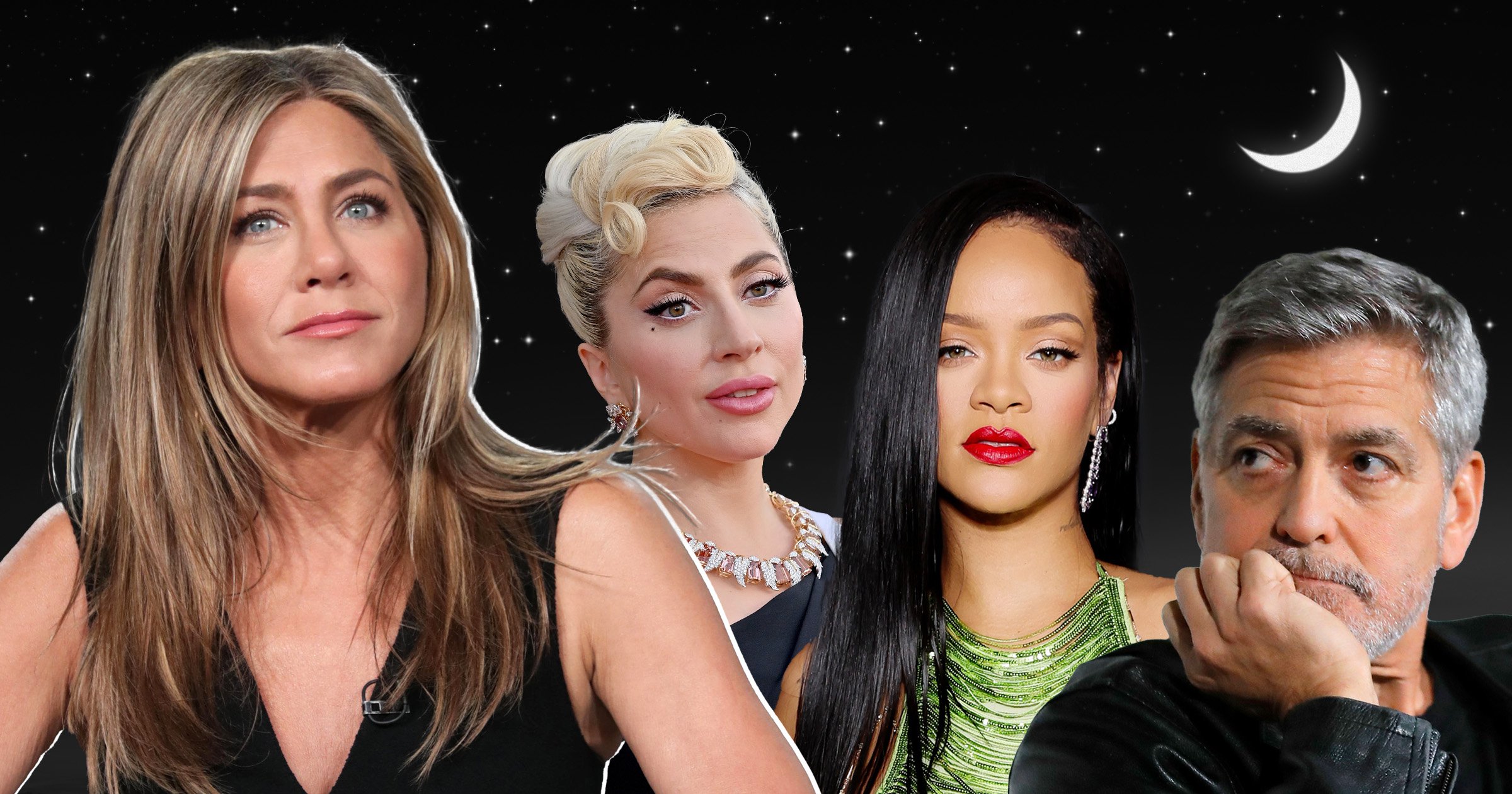 Jennifer Aniston recently opened up about her decades-long struggle with insomnia, admitting that she has spent most nights in bed ‘counting cracks in the walls’.

But the 53-year-old star, who said her sleep anxiety started in the 90s, is just one in an army of celebrities that suffer from the debilitating sleep issue.

Insomnia, a disorder that makes it difficult to fall asleep and to stay asleep, is said to affect millions of people around the world with as many as 16 million adults in the UK suffering from sleepless nights.

Showing it’s an equal opportunity disorder, some of the world’s biggest stars have been losing the snoozing and barely functioning on less than a few hours of sleep each night.

From Rihanna to Kim Cattrall, here’s the low-down on other famous faces who are being kept up all night.

The Friends star has been tossing and turning as a result of sleep anxiety for ages and admitted it has become the bane of her life.

‘I think it started somewhere in my 30s or even earlier, but you just don’t start to notice the effects of a lack of sleep when we’re younger because we’re so invincible,’ she said.

‘It began as something that I would just accept and then all of a sudden you realise the effects of your lack of sleep and how it affects your day and your work and your mind function and your physique.’

The actress said she would also end up watching the clock as she tried to drift off, which is ‘a big no-no’ as it just adds to anxiety.

‘And the more I worry about it, the harder it is to fall asleep,’ she explained to People magazine.

As for sleepwalking, Jen has also suffered from that, although she believes it’s now stopped.

‘I have been known to do that,’ she said. ‘I’ve been woken up by house alarms going off that I’ve set off. And I don’t think I do that anymore — that was when I was super sleep deprived… at least there’s that silver lining.’

The Morning Show star, who put off seeking medical help for years as she believed her issues were not a priority, has now finally sought help from doctors.

She has also joined Seize the Night and Day – a campaign that helps sufferers get news and advice for dealing with their sleep issues.

She also explained that she’s getting a better night’s sleep now she’s tried to ‘make bedtime the same every night, which is challenging for us actors, because if we’re on a movie, the schedule is all over the place.’

The pop star-turned-beauty mogul shocked fans when she claimed that she gets just three to four hours of sleep each night.

The pregnant 35-year-old previously told Vogue Paris magazine: ‘I have a lot of trouble switching off. Even when I get home early, which means before 1am.

‘I start binge-watching shows or documentaries, which I love. I can’t go straight to bed. As a matter of fact, I only sleep three or four hours a night.’

Years earlier, in 2011 Rihanna also admitted that her insomnia was an issue.

When actress Sarah Paulson spoke with her in 2019 for Interview magazine and asked her how she gets any sleep with her hectic schedule, she replied: ‘I don’t have a sleep pattern. I have sleep pockets. I fit it in when I can.’

Kim, 65, has spoken out about her sleep deprivation struggles for years.

In 2016, the former Sex and the City star was forced to pull out of the West End play Linda, in which she was to star in the titular role, because of her insomnia.

The star was told on doctor’s advice that she needed to treat the disorder before embarking on a string of live shows with punishing schedules.

In a later interview with the Radio Times in which she described her condition as a ‘tsunami’, she explained: ‘It was a gorilla sitting on my chest.

‘I didn’t understand the debilitating consequence of having no sleep. I was in a void.’

In another interview with the BBC she revealed that she sought help for her condition and ended up going through a course of cognitive behavioral therapy.

Techniques such as getting out of bed when unable to sleep and setting aside time to worry during the day she credits as helping her to tackle the problem.

The singer and actress struggles with fibromyalgia and post-traumatic stress disorder (PTSD), which are conditions known to have a negative impact on sleep.

The 36-year-old star also blamed a creative person as the cause of her sleep struggles.

‘I lie in bed and try to pray and breathe,’ she previously told OK magazine.

‘I have a very overactive mind. I’m the sort of person who’d never take medication to calm myself. It’s maddening. My passion is so strong I can’t sleep…’

In 2015, the Born This Way singer also told her Instagram followers that her thoughts often stop her from sleeping.

The Oscar-winning actor first revealed his sleep struggles in 2012.

And, although he said he’s usually in bed by 10pm, he said his racing mind keeps him from drifting off to sleep.

‘Without question, I wake up every night five times,’ the 60-year-old told The Hollywood Reporter.

‘Turning off the television causes me to think, and once I start that vision roaring… I have a very tough time getting to sleep.’

While the father-of-two’s solution is to sleep with the TV on, experts say this is one of the worst ways to deal with insomnia.

He later told the same publication that he had found yet another reason to stay up all night when his twins with his wife Amal were born in 2017.

He said instead of insomnia preventing him from a good night’s rest, it was the late-night diaper changes and feedings that took over.

However, ‘I’m a very good diaper guy, which I didn’t know I would be,’ he joked.

The queen of pop has been living with insomnia for decades.

The 63-year-old told Rolling Stone magazine in 2015 that she regularly stays in the recording studio until 2am then had to get back to mummy duties at 7am for her children.

‘[The insomnia started] unconsciously,’ she said. ‘Probably when my mother died. And sleep’s never been an easy thing for me…

‘If I can get six hours, I can get through the day. But because I want to have a career and also be an attentive mother, I tend to take a lot of breaks and deal with my kids, and then go back to work.

‘In the recording studio, I never finish before 2am, and then I have to get up at 7am for my kids. So there’s a lot of sleep deprivation…

‘You start to go crazy if you don’t sleep. But I definitely don’t understand people who sleep 12 hours a day,’ Madonna added.

‘I see that as the supreme indulgence, people sleeping until noon. How dare they? I never did that when I was a teenager…’

If you struggle with insomnia, here are some handy tips on how to deal with it.