Chrissy Teigen is opening up about what it’s like to get into a Twitter fight with the President of the United States!

The 33-year-old model and social media maven is appearing on Wednesday’s The Ellen DeGeneres Show, where talk quickly turns to her recent Twitter back-and-forth with Donald Trump.

“We all just wait for our day to come and mine happened to be Sunday,” Teigen quips, referencing President Trump calling her “filthy mouthed” on Twitter.

“My heart stopped because at that moment you know that you’re about to get just the wildest group of people ever,” she says of the online trolls. “It was a weird feeling. I was really angry. I think my eyes filled up with water just at the shock of it. I can’t believe this really happened right now.”

“Guys like boring musician @johnlegend, and his filthy mouthed wife, are talking about how great it is,” President Trump tweeted on Sunday, referencing criminal justice reform. “But I didn’t see them around when we needed help getting it passed.”

As for the tweet, Teigen jokes it was fair.

“Those two things are true. John is boring. I do have a filthy mouth,” she agrees.

Despite her initial shock, the Lip Sync Battle host admits that the feud isn’t all that surprising.

“This wasn’t that random. I’ve said a lot of things in the past I think since like 2012 I’ve been saying things about him,” she says. Teigen has been blocked on Twitter by President Trump so she found out about the tweets from screenshots from friends.

Teigen ended up calling President Trump a “p***y a** b***h,” which ended up trending on Twitter. 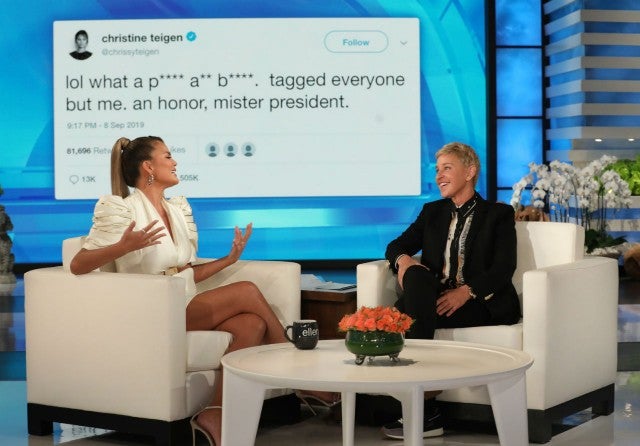 “We’re still working on how to copyright the right term,” she jokes.

Though her recent tweet might not reflect this, Teigen insists that she’s been making an effort to clean up her act online lately.

“I’ve gotten to this point where I don’t want to offend people just for a joke,” she says.

feels off-brand but going for it

💛 in portofino!! (shoutout to cobra team/backgrid)

found my toons a new dress

no caption been thinking too long

LVE BoatSorry I messed up the pic 🤷🏾‍♂️

john posted this but I have more followers

While I flood you with our perfect vacay pics let me also fill you in on the fact that we are not perfect. We try to bring our best selves when traveling but we argue just like everyone else, especially in the heat. We argue over photos we take, time management, and taking turns planning activities. We get irritable, we get annoyed, we get sad. They say you really get to know someone when you travel together and after 10yrs of jetlag together we know when to apologize or when to just give each other space. That’s marriage kids. It’s amazing and it’s not “perfect”.

Italy has stolen a pizza my heart 💚

I def snagged this inspo off of Pinterest. Is it Guy Bourdin? Helmut Newton?

Guys, marry the photographer.Up Next