Drake has hit out at rumors that he wrote a song about Kylie Jenner, after reports surfaced in 2019 that the pair had been hanging out.

Taking to his Instagram Stories, the rapper quickly shot down reports that he was referencing his rumored relationship with Jenner in the leaked collaboration with Future. Drake wrote, “A song that Mark ran last night on Night Owl sound live set shouldn’t have been played. It’s a song that leaked 3 years ago and got scrapped shortly after.”

The rapper elaborated, “He was just going too deep in the drake/future catalogue. Last thing I’d want to do is wake up having any friends of mine feeling disrespected so I just had to say that to start off the day.” 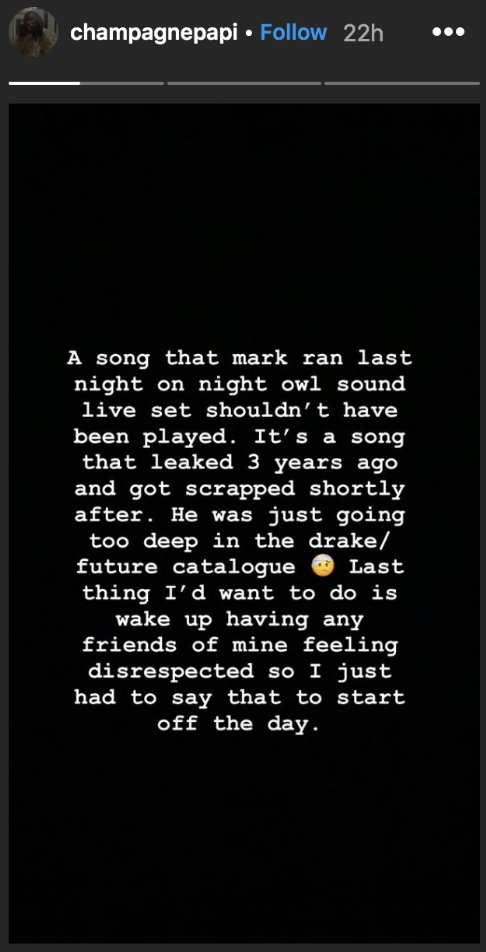 According to People, Future rapped in the song, “Yeah, I’m a hater to society / Real sh*t, Kylie Jenner, that’s a side piece / Yeah, I got 20 motherf*cking Kylies.” Later on in the track, Drake apparently mentioned Kylie’s sister and said, “Yeah, I got 20 damn Kendalls / Young slim baddies and they in Vogue / Yeah, I got 20 f*cking Gigis.”

In October 2019, it was reported that Kylie was getting close to the rapper at his 33rd birthday party. Despite subsequent reports that the pair had been getting romantic, nothing concrete seemed to materialize.

Taylor Swift’s ‘Folklore’ Returns to No. 1 for a Seventh Week

Pregnant Chrissy Teigen Admits Struggles in Coming to Terms With Her Excessive Bleeding
We and our partners use cookies on this site to improve our service, perform analytics, personalize advertising, measure advertising performance, and remember website preferences.Ok