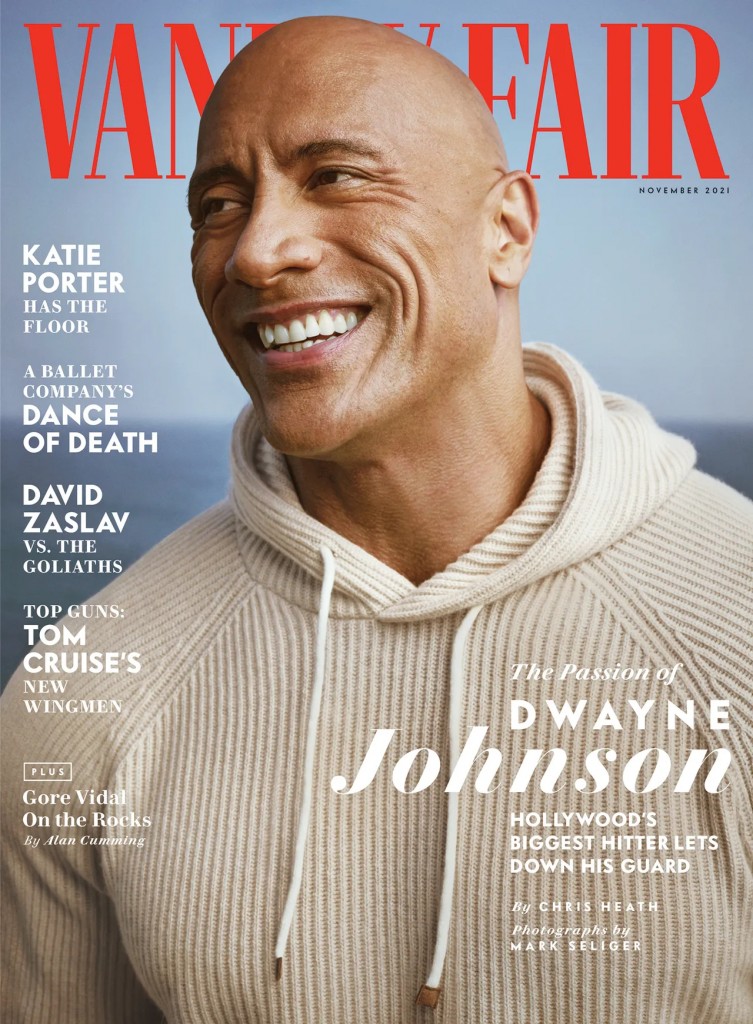 Dwayne Johnson is on the cover of November’s Vanity Fair. The editorial is great, although when does DJ not turn in a good editorial? The first shot on the site is him in the garden at Yusuian, a tearoom in Malibu . It’s such a gorgeous shot, it lowered my blood pressure just looking at it (I couldn’t find it anywhere to post it. I only have the link.) The interview is long and DJ is, as always, open, honest and emotional about his career, family and roots. The piece is to promote Red Notice, his new Netflix film with Ryan Reynolds and Gal Gadot. But the interviewer, who’d met DJ 20 years ago during press for The Scorpion King, delved far more into his past and what made him the man he is. As a result, DJ spoke on many things he’s addressed before, but with a lot more depth. One of the things that stood out for me was when he spoke of all of his companies and projects. DJ and his mom were evicted when he was 14. It comes up a lot in the article and it’s apparent it’s a defining moment in his life. What becomes much clearer in this interview is that DJ’s hustle is not based on greed, but because of those times he lived without anything and he wants to makes sure he never goes back there again.

On rolling down his window for star-tour busses: It’s one of the joys. It’s one of the best parts of fame, you know, to make people feel good. Oh, it’s the best. I do that all the time. There was a time when no one knew who I was, nor gave a shit. I roll the windows down as a reminder. What an incredible position to be in. You got a chance to make somebody’s day.

On Vin Diesel: (We are) philosophically two different people, and we approach the business of moviemaking in two very different ways. It’s the philosophy of going into work every day. Looking at everybody as equal partners. And looking at the studio as equal partners. And looking at the crew, regardless of where you’re at, either on the call sheet or otherwise, as equal partners—with respect and with humility, and being respectful of the process and every other human being who is putting in just as much time, just as much hard work and sweat equity, if not more. And I think it’s always been important to me to always be straight up and look somebody in the eye. And if you say you’re going to do something, do it.

On his drive: I think these days there could be a tendency for people to think that things come easy. It does not. No, it’s actually quite the opposite. You know, I stay up at night, putting in the work, but also really deeply contemplating the next move, and the multiple moves, and the impact and effect that this one thing will have. If you’ve ever been hungry, then you’ll never be full.

There’s a lot of contexts for each of these quotes that gives them more weight. He talks about his childhood struggles, what he and his mom went through and how being evicted and having to leave Hawaii affected him. It really made me see all his affirmations on Instagram differently. When I first read the quote in the title, I thought it was another Rockism. But fitting that comment into his larger story about when he was truly hungry, it makes so much sense. It also explains why he spoils his mother so much, because of how hard she worked when he was a kid. She also put up with his delinquency and his father’s philandering.

I’m a little tired of rehashing the whole Vin Diesel bit but the interviewer did ask DJ about it. I was interested in this quote from him on it, though, because it offered something I hadn’t heard before. If Vin was acting superior to the crew or lesser-known actors, I could see that being a real problem for DJ. I don’t think DJ is a saint by any stretch, but he does not see himself as better than anyone else who works hard. And he would have a problem with someone who did. 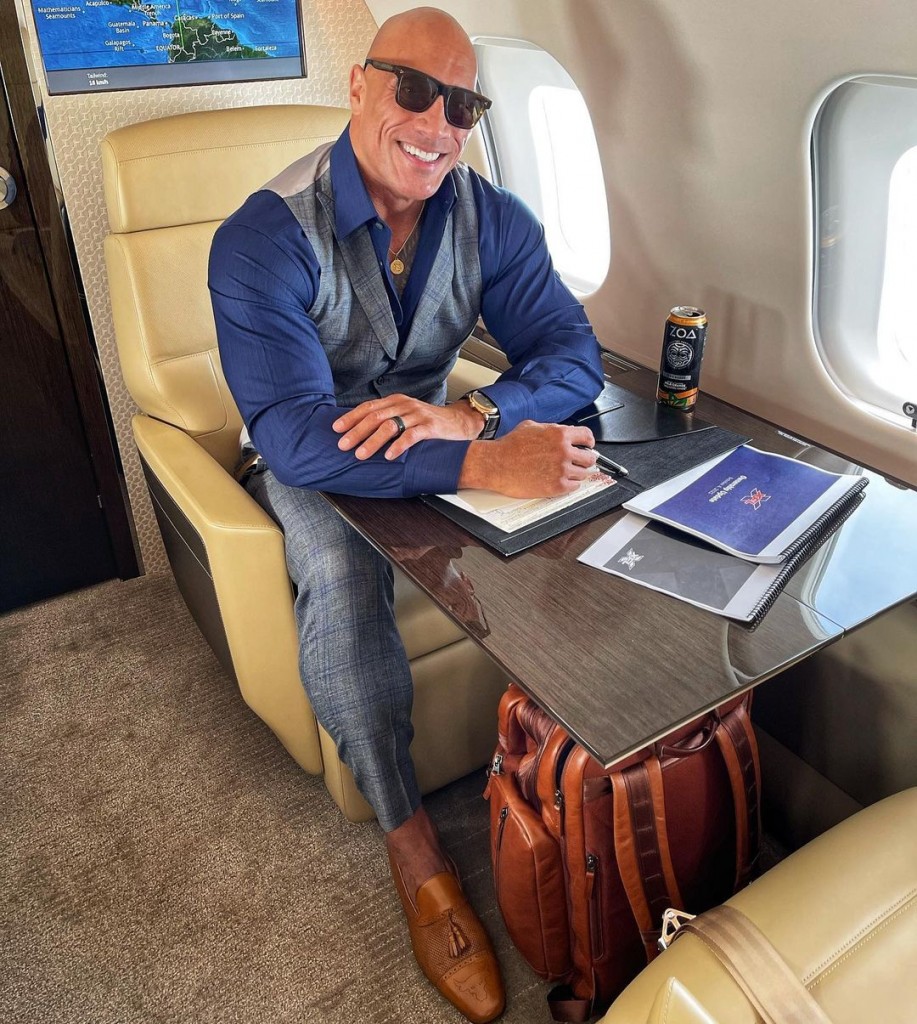 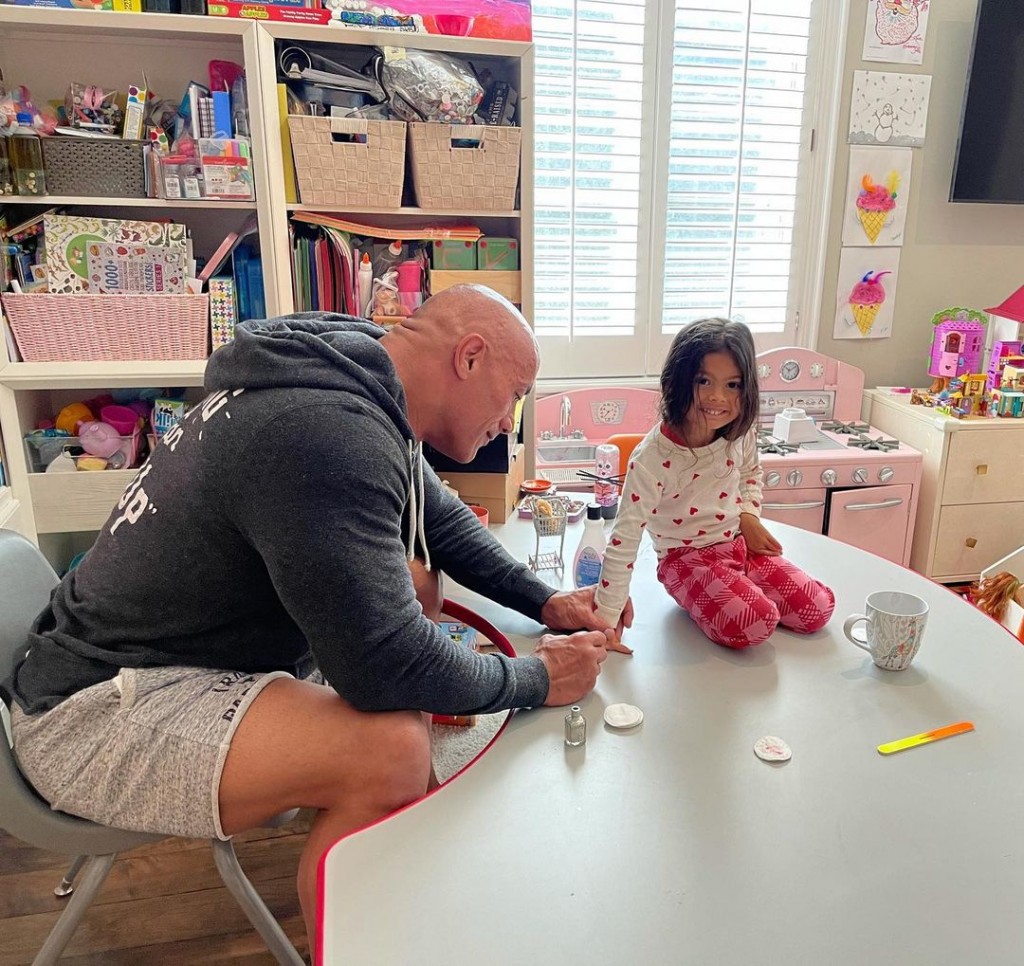