It was CBS’ turn to broadcast the Emmys this year, but maybe they should have stuck to the script of the mainly virtual 2020 ceremony on ABC.

Not perfect, but the Jimmy Kimmel hosted 72nd Primetime Emmy Awards was and remains the most successful trophy show effort of the Covid-19 epoch. In fact, it is the best award show in years even in a pre-pandemic world. That certainly could not be said of the 73rd Primetime Emmy Awards tonight, even if there was an audience of nominees this time.

As Amy Poehler said so well right near the end of the long show, “what time is it, and how do we get out of here?”

Hosted by Cedric the Entertainer for the first time, the executive producers of Sunday’s more than three-hour show promised “fun” and a “celebration.” Now Ian Stewart and Reginald Hudlin EP’d last year’s Emmys. Yet, as every politician, showman and salesman know, some promises are just harder to keep than others. Or put it this way, “read my lips, no more same old same old.”

And it’s time we admit it, with a very pale sweep of the top acting categories, the same old same old really doesn’t cut it anymore. At this point, and not to make any comparisons to the scandal plagued Golden Globes, but maybe it is time to hit the pause button for a year or two and reinvent the wheel, for real.

Starting off with a montage of the year on the small screen and a bathrobed Cedric proclaiming “it isn’t just about the very best of this past year, it’s all about the things we love about television,” the 2021 Emmys kicked into a full throttle rap battle lite with LL Cool J, Dave’s Lil Dickey, Billie Porter, black-ish’s Anthony Anderson and Traci Ellis Ross, and Rita Wilson leading the DTLA tented crowd in a rousing TV centric tribute to departed hop hop legend Biz Markie’s “Just A Friend.”

For a second, it looked like this could be the awards ceremony that isn’t lame at best or openly suck.

Then Seth Rogen showed up to present the award for outstanding supporting actress in a comedy series and bummed out the initial buzz with some hard truths – and God bless him. 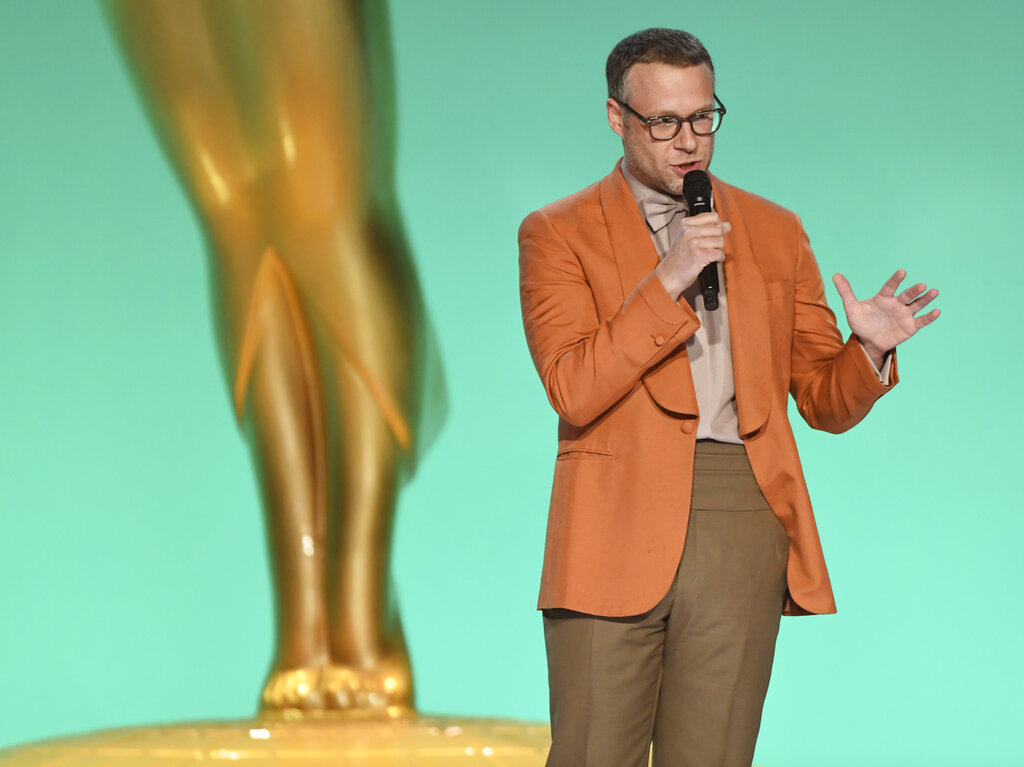 “There’s way too many of us in this little room,” said The Boys EP and self-proclaimed pothead deadpanned, bringing down the pace like a flat tire at the Indy 500.

“I would not have come to this,” a scripted Rogan rightly pointed out about the lack of masks and social distancing in a Delta variant surge, while losing the plot simultaneously. “Why is there a roof? It’s more important that we have three chandeliers than that we make sure we don’t kill Eugene Levy tonight. That is what has been decided.”

Hollywood is rarely any good at providing an example to America, but they sure know how to make it hard for themselves. It should be easy to land punches on Joe Rogan and his Ivermectin advocacy for Covid treatment, as The Masked Singer’s Ken Jeong aimed to do in a skit on Sunday’s show.

Instead, even with proof of vaccination and a recent negative Covid test required for entrance, the Emmys looked tone deaf. The show shockingly made no direct reference to the more that 600,000 Americans who have lost their lives so far to the virus.

Even given the obvious opportunity of the moving In Memoriam segment and the accompanying performance of ‘River’ by Leon Bridges and Jon Baptiste, nothing.

After the intended sobering remarks by the relatively reasonable Rogen, the expletive laced early wins of Ted Lasso’s Hannah Waddingham (“Jesus Christ on a bike!”) and Brett Goldstein, and swipes at Rogan, Covid-19 anti-vaxxers and Tony Danza by The Neighborhood star worked hard to find the upbeat again.

But reality bites, and the subsequent standard listing and mocking of top nominees like The Crown by Cedric slipped the ceremony back into the slovenly status quo. Not a winner’s circle, especially when you add pre-recorded low-tech skits of a green screened Cedric urging Tom Brady to toss the Lombardi trophy to him in his dinghy in Tampa’s Hillsborough River.

The broken teleprompter gag by Schitt’s Creek stars Eugene Levy (who did make it through the ceremony as his fellow Canadian Rogen desired), Annie Murphy, Catherine O’Hara and a wonderfully attired Dan Levy was a masterclass in wasted talent. At the halfway point of the show, Cedric’s Mission Impossible tinged fly on Mike Pence’s hair routine felt older than the former Veep’s POV on women – and that’s some 14th century stuff 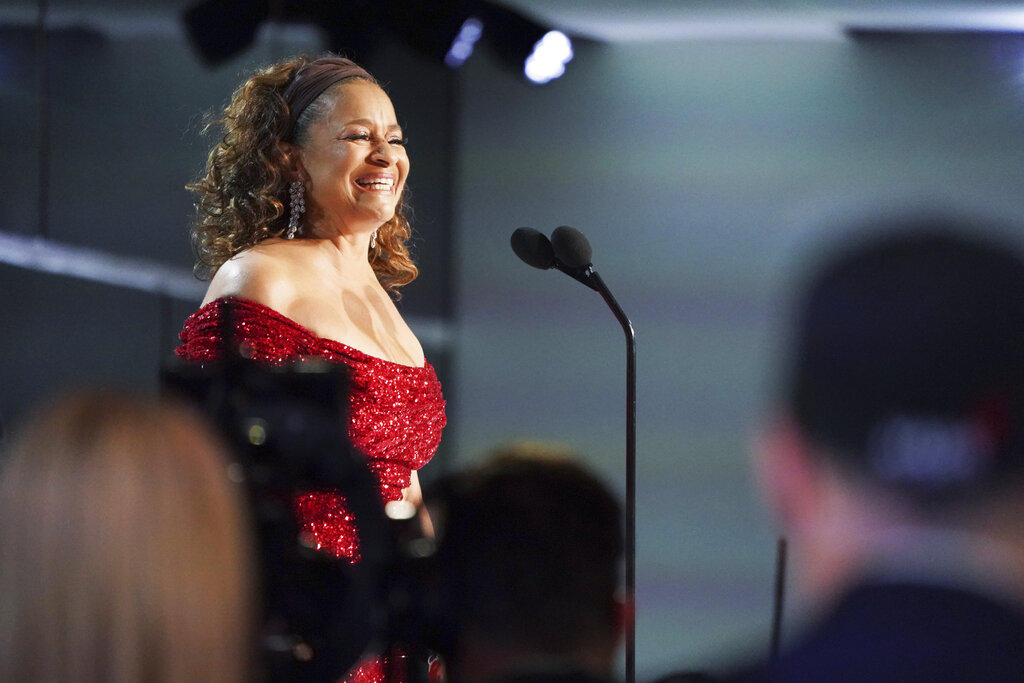 With the exception that is the glory of Debbie Allen and the truths of the cast and creator of Reservation Dogs, no matter how you drape and dress it up, those network time fillers are more of the same old same old. Then, with the exception of whatever Conan O’Brien was drinking, the same old, presenters, banter, winner unveiled, cut to winner shocked and coming up to stage amidst hugs and then speech (and all that disrespectful sound off music) is sinfully the same old same old slog.

Which, for all the big wins for Netflix’s The Crown, AppleTV+s Ted Lasso, HBO”s Mare of Easttown, VH1’s Ru Paul’s Drag Race, HBO Max’s Hacks and Netflix’s The Queen’s Gambit tonight, made tonight just another shade of gray. A sad takeaway when the 73rd Primetime Emmys could have been bedazzling in a year where TV was part confessional booth and part Tardis for so many of us at home against the shifting norms of the pandemic.

Which begs the real question here, doesn’t it?

In the sophomoric round of the global health crisis and with audiences dropping award shows like 4th period French, why haven’t the studios, streamers and agencies said enough is enough? How low is too low viewershipwise? How insular is insignificant? How come no one will step in to stop the bleeding?

Leaving the Oscars, Grammys and the rest aside and the often predictable and conservative nature of TV Academy voters, why does the small screen’s biggest night have to be so inconsequential?

Broadcasting the Emmys for the first time since 2017, it’s not like CBS didn’t had the perfect storm of an opportunity tonight to switch it up – and I’m not talking about streaming the show on Paramount+

Already hampered by the record low viewership of successive ceremonies and no overrun bounce from the megamarket Dallas Cowboys’ nail bitter 20-17 win over the LA Chargers this afternoon, the Emmys return to the ViacomCBS-owned network for the first time since 2017 was also up against Sunday Night Football on NBC with the Kansas City Chiefs vs. the Baltimore Ravens fighting it out in a very close game.

So, with competition like that and no lucky breaks, why not throw out the baby, the bathwater, the and whole notion of TV Academy plumbing?

I mean, picking up on what Schitt’s Creek did last year in Toronto, The Crown’s London set boozy Emmy shindig looked like way more fun than the stilted affair that was going down in L.A. and its reliance on a lot of what didn’t work at the Oscars. If “fun” and “celebration” is the mantra, then, as another native of the metropolis known as the Smoke, Oliver Twist fictionally once said: “Please sir, I want some more.”

Or rather, can we score Seth Rogen a dime bag or two, and let him loose next year with Ru Paul? Hear me out NBC. One hour, the two of them at the Hollywood Bowl, five sets of presenters, all nominees backstage and more Debbie Allen.

I mean, you’re going to move it a Monday so you can still have your NFL, so what have you got to lose? Seriously.