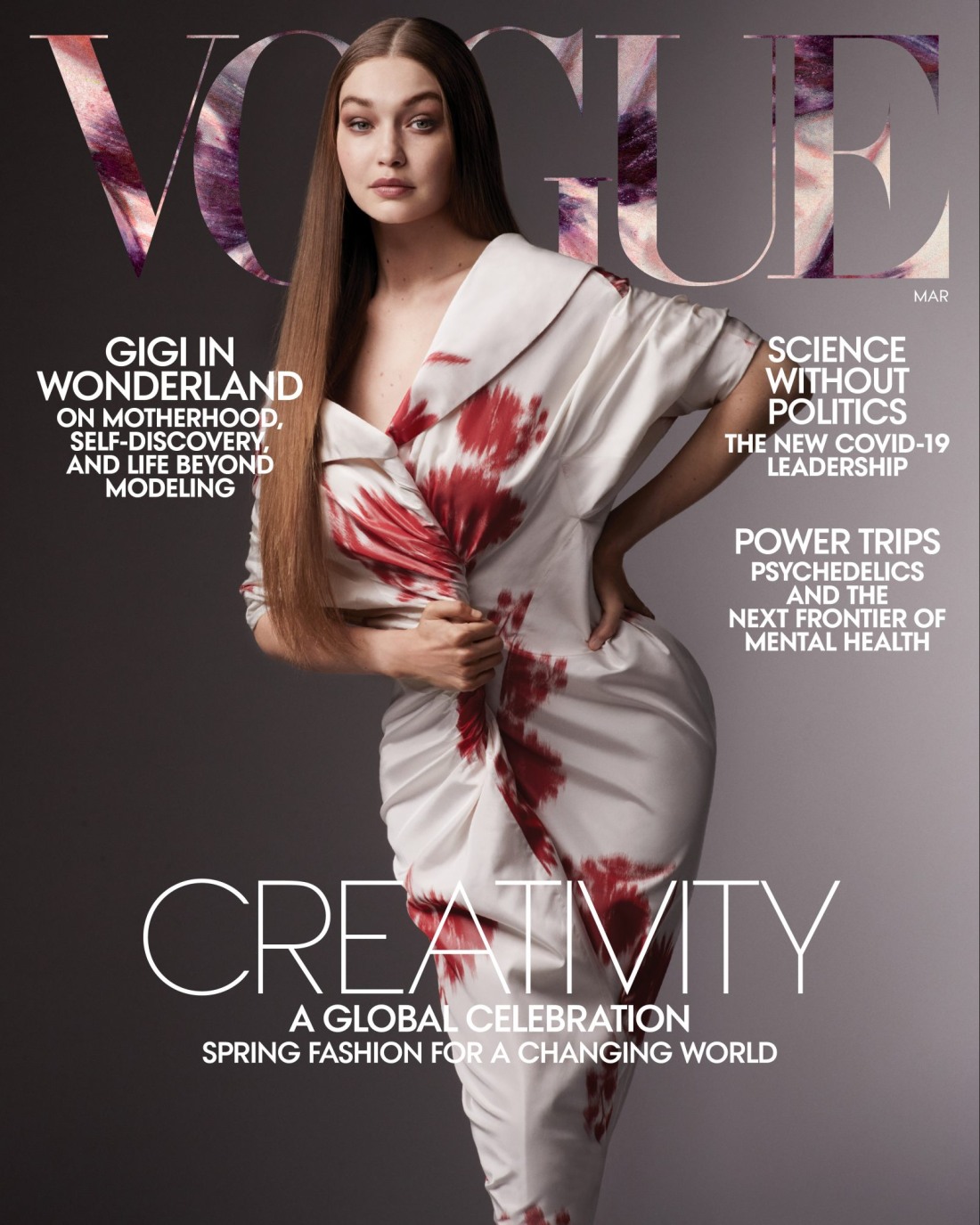 Wow, Vogue really did Gigi Hadid dirty with this cover, right? Gigi covers the March issue of Vogue, her first magazine cover since welcoming her daughter Khai last September. I would imagine that for a model, the “first photoshoot back” is one of the most sensitive ones, and I would imagine that Vogue would have tried to make a new mom look voluptuous and earth-mothery. Instead, Vogue gave her harsh makeup, bad lighting, a tragic center part, weird neck shadows and a dress which looks like a bloody sheet. Offensively bad, my God. That being said, the interview is surprisingly good. Gigi talks at length about her pregnancy, her labor, her first months as a mom and her dreams for her daughter’s future.

Having a home birth with no drugs: “What I really wanted from my experience was to feel like, Okay, this is a natural thing that women are meant to do. I had to dig deep. I knew it was going to be the craziest pain in my life, but you have to surrender to it and be like, ‘This is what it is.’ I loved that. There definitely was a point where I was like, I wonder what it would be like with an epidural, how it would be different. My midwife looked at me and was like, ‘You’re doing it. No one can help you. You’re past the point of the epidural anyway, so you’d be pushing exactly the same way in a hospital bed.’”

Zayn caught the baby. “It didn’t even click that she was out. I was so exhausted, and I looked up and he’s holding her. It was so cute.”

She’s not looking to have another baby any time soon: “I know my mom and Zayn and Bella were proud of me, but at certain points I saw each of them in terror. Afterward, Z and I looked at each other and were like, We can have some time before we do that again.”

Zayn bought a farm adjacent to the Hadid family farm in PA: “We’re still close by but we have our space to be our own little family….I always want to be here full-time. I love the city, but this is where I’m happiest.”

Deciding to shoot a Vogue cover 10 weeks postpartum: “I know that I’m not as small as I was before, but I also am a very realistic thinker. I straight up was like, ‘Yeah, I’ll shoot a Vogue cover, but I’m obviously not going to be a size 0,’ nor do I, at this point, feel like I need to be back to that. I also think it’s a blessing of this time in fashion that anyone who says that I have to be that can suck it.”

Raising Khai to understand her multifaith family: “My dad’s Muslim, and my mom grew up celebrating Christmas. I felt like I was allowed to learn about every religion when I was a kid. I think it’s good to take different pieces of different religions that you connect with, and I think that’s how we’ll do that… My brother, when he was in elementary school, someone said to him, ‘Your dad’s a terrorist,’ because that was after 9/11. I think that [Zayn and I] both want our daughter to understand fully all of her background—and also we want to prepare her. If someone does say something to her at school, we want to give her the tools to understand why other kids would do that and where that comes from.”

Throughout the piece, Gigi is mostly having a conversation with herself about how she wants to stay in this bubble she’s created for herself in Pennsylvania, on the adjacent farms of her family and Zayn. She sounds like she’s had a lovely quarantine on the farm, honestly, with the added bonus of being blissed out with the baby and all of that. So, yeah, I don’t know if Gigi will ever go back to modeling full time. She doesn’t want toleave the farm.

I also loved what she said about having a Muslim father, and being with a man who was raised Muslim. As the product of a multi-faith family, she’s right that the best way to approach raising Khai is to expose her to all sides of her family and give her the information early, info about Islam and Christianity and, who knows, probably Buddhism too.