We’ve been waiting for this one!

You saw the teaser on Monday — and now, Hailey Bieber‘s Call her Daddy interview has officially dropped! Host Alex Cooper wasted no time making sure listeners got exactly what they’ve been waiting for for years!! First off — they never mention Selena Gomez by name (though it was very obvious who they were talking about). And after 15 mins of pleasantries, they finally dove in. The host said:

“Your husband was in a very public relationship. They were kids. People were obsessed with the idea of them. People were confused on the timeline. So I guess my question is Haley, were you ever with Justin romantically at the same time as her?”

“No, not one time. When him and I ever started, like, hooking up or like anything of that sort, he was not ever in a relationship — ever, at any point. It’s not my character to mess with someone’s relationship, I would just never do that. I was raised better than that. I’m not interested in doing that and I never was.”

But then she made things a little confusing by saying:

“I think that there are situations where you can still kind of have, like, back and forth with someone, but even that was not the situation. I can say, period, point blank: I was never with him when he was in a relationship with anybody. That’s the end of it. And I had been involved with him since I was 18. I think sometimes is in question of like us getting together and getting engaged and him having been spending time with his ex before that.”

Why bring up a “back and forth” scenario when that’s what you’re trying to steer clear from?! Just saying!

As Perezcious readers know, Hailey and Justin first met in 2009 through her dad, Stephen Baldwin, but didn’t confirm their relationship status until 2016. They split for a bit (while Justin rekindled his longtime fling with Selena) and then got back together — and married — in 2018.  After all, the proposal came only two months after his breakup with Selly. Naturally, everyone’s wondered about the timeline since things happened so fast, but Hailey stood firm, continuing:

“I understand, again, how it looks from the outside and there’s a lot of perception there, but that was a situation where I know for a fact that it was the right thing for them to close that door. They were not in a relationship at that time, but of course there’s a very long history there and it’s not my relationship. It has nothing to do with me, so I respect that a lot but I know that it closed a chapter and I think it was the best thing that could’ve happened for him to move on and be engaged and get married. Like, move on with his life in that way.”

The 25-year-old noted this is “hard” for her to talk about since she doesn’t want to speak on either Justin or Selena’s behalf. Is that why she’s hardly spilling the juicy deets?! 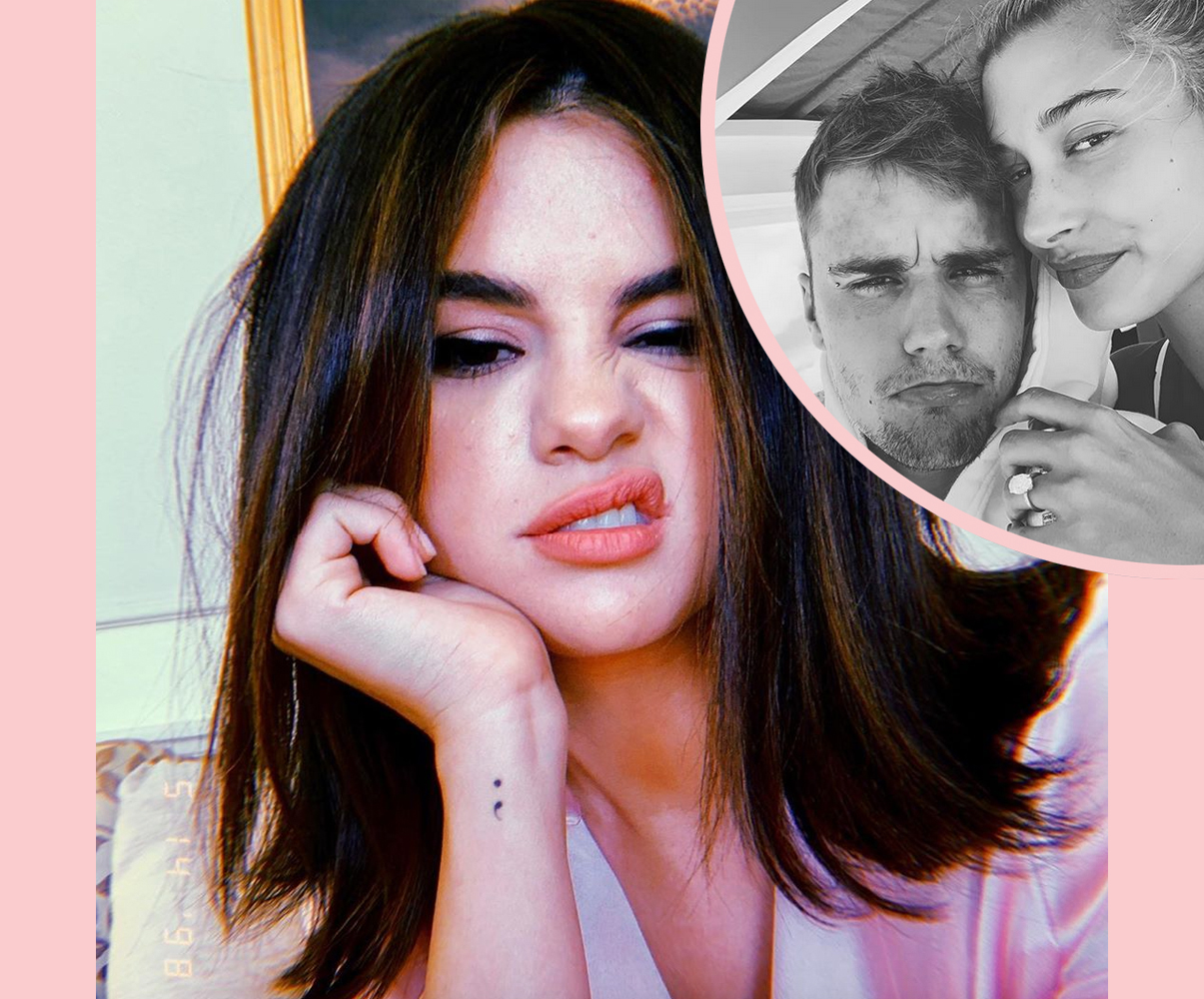 So, was Justin really over the Wizards of Waverly Place alum even though it had been mere months since they split?? Hailey mused:

“I just know what what was going on when we got back together, and I know what had to happen for that to come back together in a healthy way. And I think that it was the most healthy, mature decision that he could have made, and I respect that. As a woman, I would never wanna get into a relationship with someone and be engaged to them and be getting married to them and think in the back of my mind, ‘I wonder, like, if that was really like closed for you?’ I know for a fact that the reason we were able to get back together was because it was very much completely closed, and that is respectful to me.”

Alex then wondered why she thinks the internet was so “angry” about their engagement. Instead of addressing the messy timeline, Hailey believed the hate came because of their young ages, saying:

“First of all, I think one thing is that we’re both really young. I think, honestly, that’s for starters which I totally understand. When we got engaged, I was 21 and he was 24. I personally never thought I was going to get married that young. I think the timing was obviously very rapid and very fast. Now being four years past that looking back on it, I totally get it. That seemed really drastic and really crazy, but that was what we felt was a decision between the two of us, and it felt correct for the two of us at the time.”

Once again hinting at the complicated chronology, the Rhode Skin founder continued:

“The only people that really know the truth of the situation, the timeline of it and what went down, are me and him. Perception is a really tricky thing, because when you’re watching something from the outside, you can see it one way, when it may not really be the reality of what happened behind closed doors.”

Not even Selly G knows?! Hmm. She added:

“I know how we get to where we are. Period.”

Someone’s getting testy! LOLz! Hailey then went on to address how all the Jelena haters have negatively impacted her mental health, sharing:

“A lot of the hate and the perpetuation comes from, like, ‘oh you stole him’ and I guess that just comes from the fact that they wished he ended up with someone else. And that’s fine, you can wish that all you want, but it’s not the case.”

Alex then brought up an incident during an Instagram Live about two years ago in which people encouraged Jelena fans to harass Hailey by posting comments pledging their allegiance to Justin and Selena. On how the incident made her feel, she responded:

“There’s a certain numbness that you get. It still happens to this day, if I was to go live right now, it would still be happening. You reach a point where you have to ignore it.”

Calling out the trolls for bullying, the fashionista insisted the hate is “hurtful” to her husband, too. She added:

Sadly, Hailey got particularly candid by sharing she’s suffered from suicidal thoughts in the past as the hate has sent her into a “really dark” place causing her to have “thoughts of, like, it not being worth it anymore or not wanting to be here anymore.” Her mental health has also suffered from constant comparisons to the Disney Channel alum and a desire to be a “people pleaser,” she expressed:

“I’ve had to be more gentle with myself. I’m still working on not invalidating the way that I feel and I’ll probably be working on that forever.”

We’re so sorry to hear she’s struggled. Nobody deserves that!

She also touched on the 2021 Met Gala, during which the crowd chanted “Selena” as she walked the carpet. Denying rumors the heckling made her cry (as it appeared), she insisted she just “felt like she had something in eye.” 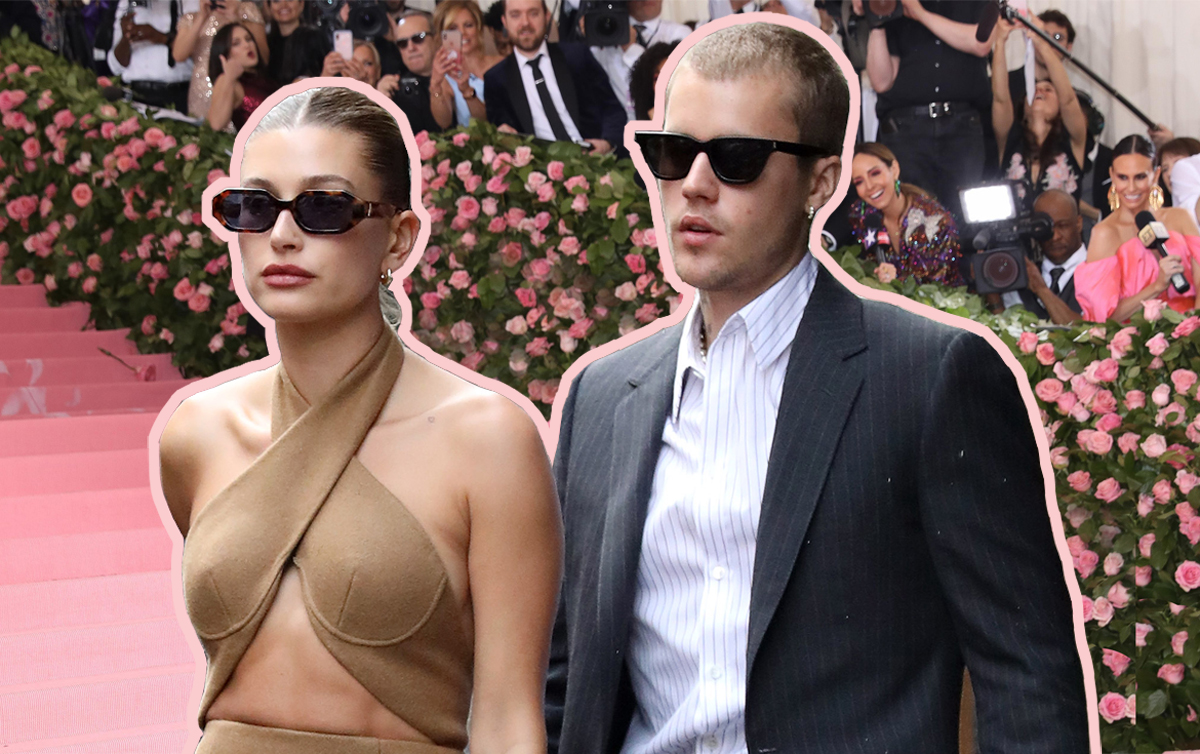 One of the more shocking revelations came when Hailey revealed she and Selena spoke after her wedding to Justin, seemingly to clear the air. She didn’t give details about the conversation (sigh) nor did she reveal if JB was present, but she said the conversation “brought a lot of peace” and that the three of them “know what happened.” Hailey continued:

“I respect her, there’s no drama personally.”

“That’s why I’m like, it’s all respect. It’s all love. That’s also why I feel like if everybody on our side knows what happened and we’re good and we could walk away from it with clarity and respect, then, like, that’s fine.”

Despite having some communication with the singer, Hailey and Justin have never asked her to reach out to her fans asking them to stop harassing the couple. She noted:

“What I will say is that she has been in this industry much longer than I have and maybe there’s something she knows about, like, it wouldn’t fix anything.”

After everything, Hailey tried to leave things on a positive note, saying of her haters:

SoooOOOOOoO, Hailey pretty much omitted any specific details giving us nothing. Cool!

Many fans on Twitter also pointed out that she previously said she’d never talk about this… but happened to do this interview addressing all the drama just a few weeks before Selly’s Apple+ documentary My Mind & Me premieres. ICYMI, it chronicles Selena’s struggles over the last six years… which means it may just touch on her, The Biebs, and Hailey’s situation.  Perhaps the model was trying to get her side out there before it comes out? Guess we’ll just have to wait and see! Thoughts, Perezcious readers?! SOUND OFF in the comments! 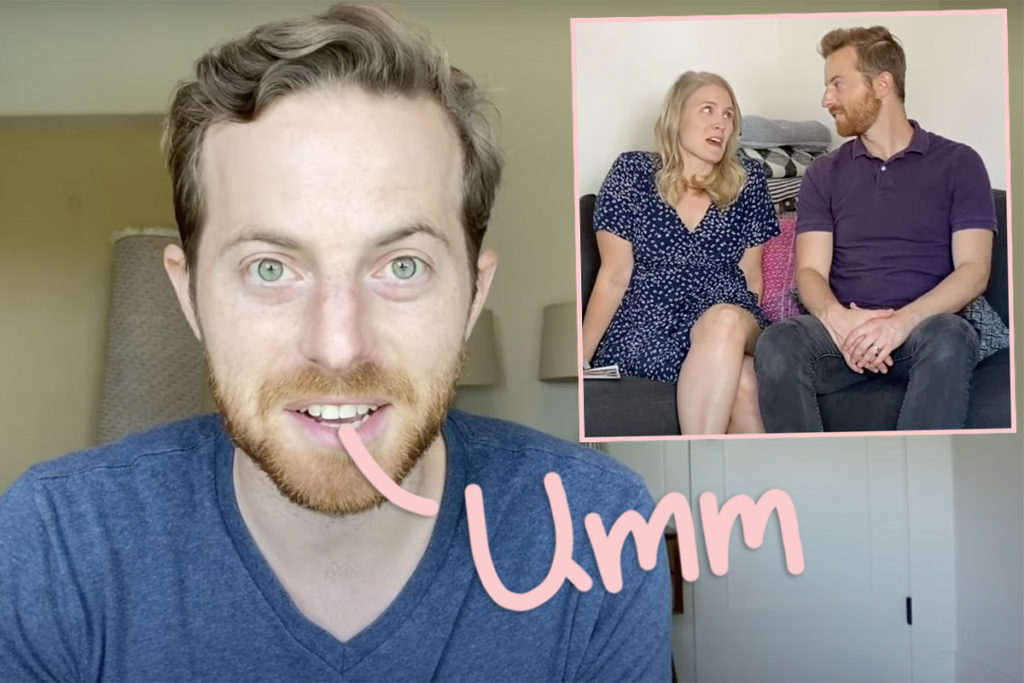 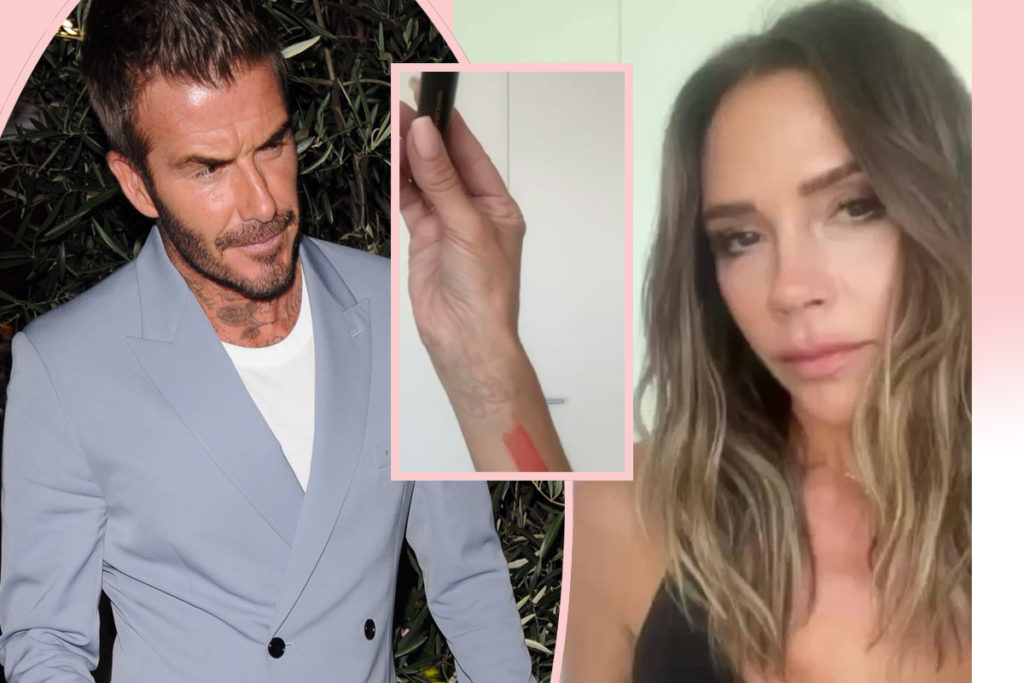 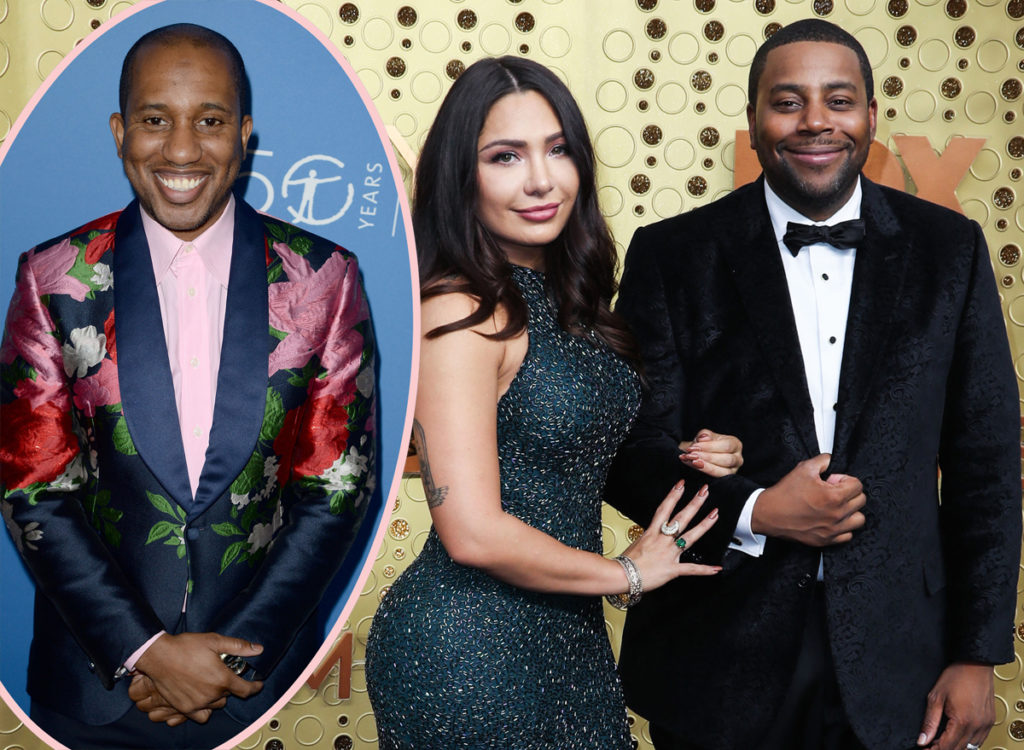 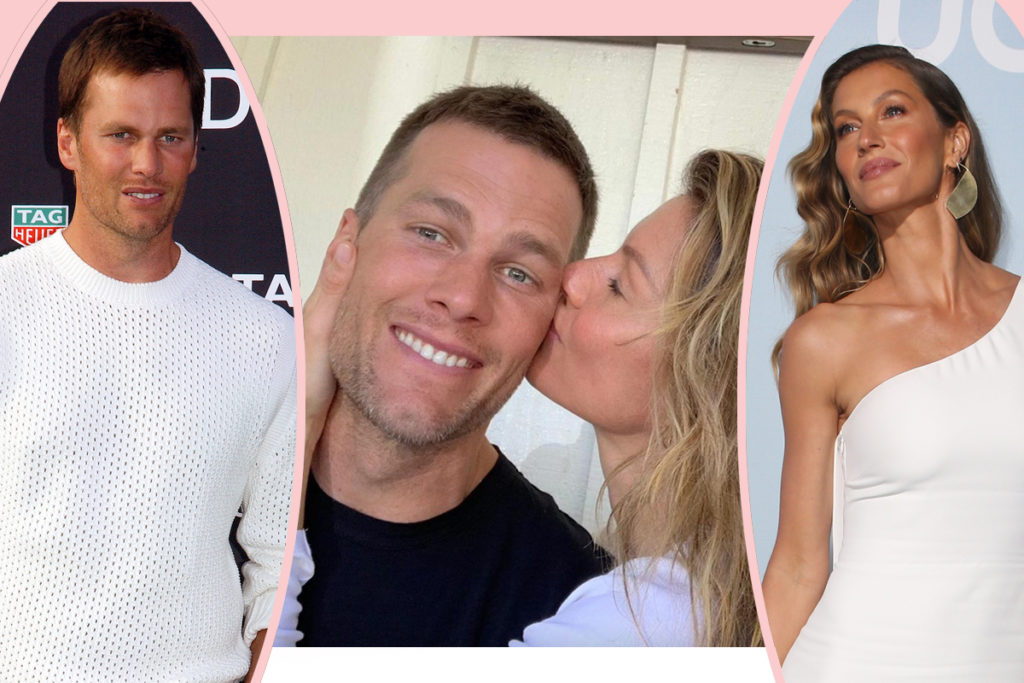