Jennifer Aniston is opening up about how she felt when reunited with her former co-stars for the “Friends” reunion. Aniston, along with the rest of the show’s stars, recently came together for the first time since the widely popular sitcom ended in 2004, to celebrate its 25th anniversary. Aniston revealed that the experience was more emotional than she expected. She told USA Today, “We all thought how much fun this is going to be, to go back to the set… (But) it’s been so long that you forgot how emotional that time was, to say goodbye to those people.”

One “Friend” who was also particularly emotional was Matthew Perry. At one point during the special, he even admits, “I’m going to cry now.” During his time on the show, which aired from 1994 to 2004, Perry had struggled with addiction. According to Us Weekly, he first checked himself into rehab in 1997 after becoming addicted to Vicodin. He went back to rehab in 2001 following a hospitalization the year before for pancreatitis resulting from alcohol abuse. Perry explained at the time, “I got sober because I was worried I was going to die the next day.”

In 2011, Perry returned to rehab, but these days he seems to be doing better than ever. While Perry once admitted, “I don’t remember three years of it,” when it came to his time on “Friends,” he did recall one thing at the reunion from being on the show that even Aniston learned for the first time. 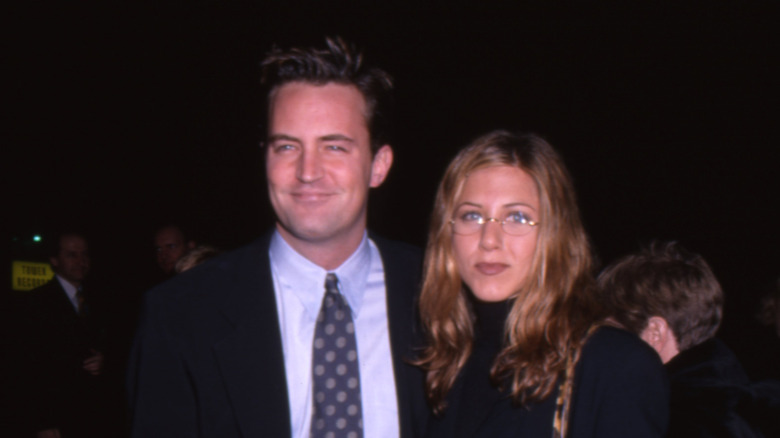 Despite starring on “Friends” for 10 years, the reunion taught Jennifer Aniston something about one of her costars. Matthew Perry revealed during “Friends: The Reunion” how he used to “go into convulsions” during the show’s tapings if the studio audience didn’t laugh at the jokes he made as his character Chandler Bing. He explained (via Us Weekly), “To me, I felt like I was going to die if they didn’t laugh. And it’s not healthy, for sure.”

That was apparently news to Aniston. She later told the “Today Show”, “I didn’t understand the level of anxiety and self-torture [that] was put on Matthew Perry, if he didn’t get that laugh, and the devastation that he felt.” She added, “[But it] makes a lot of sense.” It appears Perry’s other co-stars were also unaware of the pressure he felt; after his confession on the reunion, Lisa Kudrow replied, “You didn’t tell us that then.”

But Perry’s co-stars and even the director of the reunion special, Ben Winston, continue to have his back. When fans commented on Perry’s appearance, Winston defended him saying, “People can sometimes just be unkind … He’s a brilliantly funny man and I thought he had some great one-liners in the show.” He added, “I felt just happy and lucky to be in his presence and directing him on something like this.” And we’re just happy we got to see Perry, Aniston, and the rest of the “Friends” cast together again!