The ‘Law & Order: SVU’ star brushed off haters who have called him and his wife Coco Austin out for the decisions they make in raising their daughter Chanel Marrow.

Ice-T, 63, can’t be bothered by people dissing his parenting decisions. The Body Count singer showed that he remains unfazed when people call him or his wife Coco Austin, 42, for the way they raise their five-year-old daughter Chanel Marrow, in a Thursday September 30 interview on The View. The rapper revealed that he has a personal rule for people that want to chime in: “Do not pay attention to anything anyone says on the internet.”

The Law & Order: SVU star and his wife have faced backlash recently when Coco posted a photo of Chanel wearing French tips for school picture day. The couple also raised eyebrows when Coco revealed that she still breastfed Chanel and called it a “bonding moment” in an August interview with Us Weekly. Ice-T had some solid advice for whose opinion parents should listen to. “Worry about the people who walk up to you and say things in your real life. Those are the people you should be concerned with,” he said. “Everybody parents differently. I say every house has its own constitution. We’re doing okay. Our baby’s okay.” 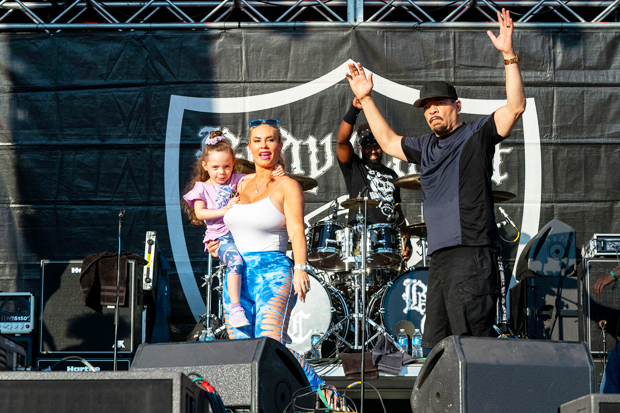 Ice-T concluded by mentioning that he’s not too concerned about what people say online. “I don’t pay attention to the internet,” he said. Back in August, Ice also had a hilarious clap back to people who thought that Chanel was too old to breastfeed. “News Flash! We feed Chanel FOOD,” he tweeted. “She just likes to suck moms boob every now and then… Me Too!”

Earlier in the interview, the co-hosts asked Ice-T about his daughter adorably running onstage with his metal band Body Count. The vocalist noted that it’s been a bit of a staple since Chanel was a toddler. “Coco always sits on the side of the stage, and since Chanel was 2, she would say, ‘Go to daddy,’ and she would run onto the stage. Now she knows what she’s doing. So now, she has lines. Now she like throws up the peace sign or throws up the heavy metal sign. I love it,” he said. “Coming from the contrast of how hard the music I do, and how aggressive it is, and then to see this baby run onstage, just kills everybody.”