If you’re confused AF about KJ Apa’s romance with French model Clara Berry, then you’re def not the only one. After going public with their relationship in February 2020, the two shared several loved-up pics and vids of each other on social media… and then deleted them all… and then seemingly confirmed they were still dating with a scandalous photoshoot months later. KJ Apa and Clara Berry’s relationship timeline is all over the place, but at the moment, it seems as though the couple is getting pretty serious. Like, naked-photo-sesh-in-the-South-of-France serious.

Before getting involved with Berry, Apa was reportedly linked to actor Britt Robertson, who starred alongside him in A Dog’s Purpose and I Still Believe. It’s unclear whether they were ever officially an item, and considering how tight-lipped the Riverdale actor is about his love life, fans will likely never know. (Reps for Apa and Robertson did not return Elite Daily’s previous request for comment on the status of their rumored relationship.) As Apa told Mr. Porter in March 2020, he likes to keep certain parts of his life on the down-low. "I think privacy is everything," he said when asked about his maybe-relationship with Berry. "I really do work hard on protecting my privacy, my home, my family, the people I love." Though much of it is a mystery, here’s what I do know about Apa and Berry’s quiet romance.

They Sparked Dating Rumors In December 2019 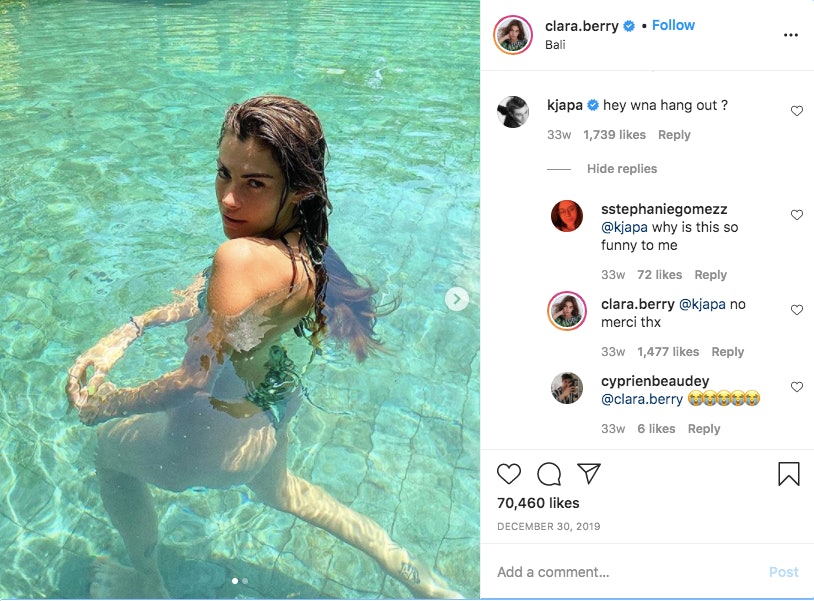 Happiest girl in the world nobody can disturb me

Fans first suspected Apa had a new woman in his life after he admitted he was "very much in love" during a December 2019 Q&A with Wired. Around the same time, he and Berry started liking each other’s Instagram pics, leading fans to believe the model was Apa’s new love interest. He even commented on a photo of Berry in a pool in Bali with, "hey wna hang out ?" and she jokingly replied with, "@kjapa no merci thx." (BTW, another pic posted by Berry a few months later suggested the two were actually in Bali together at the time.)

They Became IG Official In February 2020

On Feb. 3, Apa posted an IG pic of himself kissing a woman in Paris with the caption "coup de foudre," which roughly translates to "love at first sight." Though the actor didn’t tag his maybe-GF in the photos, sneaky fans eventually figured out her identity.

Four days later, the model uploaded a picture of her and Apa kissing in a (very familiar-looking) swimming pool in Bali. She captioned the Insta with, "J’irai chercher ton cœur si tu l’emportes ailleurs," which translates to "I’ll get your heart if you take it somewhere else." She then shared another pic for Valentine’s Day of her and Apa looking cozy, which she captioned, "Je t’aime crazy heaps" (meaning, "I love you"). Both pics seem to have been taken back in December, based on Berry’s IG.

After making a few more appearances on each other’s Instagrams (including a February IG Story of them driving around Los Angeles together, which Berry captioned, "I f*cking love you"), the two ended up deleting all of their pics together. It’s still unclear whether this was for privacy reasons or because of a breakup.

After months of speculation over Apa and Berry’s relationship status (especially since Apa reportedly spent quarantine with his Riverdale co-star, Cole Sprouse), the actor made it very clear where he and Berry stood. On Aug. 19, Apa took to Insta to share some… well, cheeky pics from his recent trip to France with Berry. The risqué photoshoot seemingly took place in Biarritz, a town on France’s Basque coast, and showed Berry nude on a ledge overlooking the water. His caption: "There’s nowhere else."

Berry shared the same pics on her own IG grid, captioning them, "Seul au monde," or, "Alone in the world," and crediting her boo as the photographer. Two days later, she posted a few more (tamer) pics from the photoshoot with the caption, "True reflection." She also commented on Apa’s Aug. 19 post, writing, "Jtm," which is an abbreviation for "Je t’aime," or, "I love you." Whoa, baby!

So basically, the relationship between these two is a total mystery, but I’m just happy to go along for the ride.