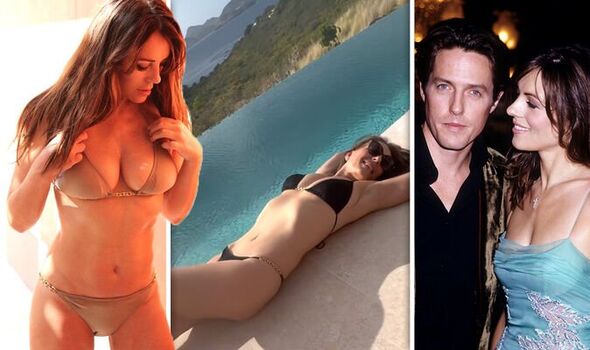 Liz Hurley, 56, causes stir as she frolics in skimpy bikini ‘Hugh Grant must kick himself’

Model and socialite Elizabeth Hurley stunned her social media followers yesterday as she posted a video of herself lounging poolside in the sunshine. The star looked sensational as she showed off her enviable curves in a skimpy black bikini.

Liz, 56, shared an update with fans after finishing up filming for the day, giving her 2.3 million Instagram followers the opportunity to see her model her newest bikini.

Yesterday, Liz lounged on the side of the pool in a skimpy black number held together by metal chain links.

She could be seen stretching out her arms and legs as she dipped one hand into the water.

The star soaked up the sun in a pair of shades in front of a scenic backdrop, featuring the sea and some rolling hills off in the distance.

“When filming wraps for the day,” she penned with a kissing emoji.

Liz’s fans took to the comments section to compliment the glamorous model.

“You go girl!! Get your tan on!” commented Gregory Harris.

Liz Hurley, 56, caused some followers to talk about her ex Hugh

“Somewhere out there Hugh Grant is sobbing like a little girl,” added John Davila.

The star has her very own swimwear collection, which features swimsuits, bikinis and other holiday clothing in a range of colours.

Love Actually actor Hugh met Liz while they were working together on Remando Al Viento in 1987.

The pair dated for 13 years before splitting up in 2000, and it has been reported that they parted amicably.

In recent years, Liz has confirmed that she and Hugh, who is now happily married to Anna Elisabet Eberstein, remain “extremely good friends”.