After being criticized for often speaking about her late father, Senator John McCain, the former ‘The View’ co-host believes that the social media trolls ‘need therapy.’

AceShowbiz –Meghan McCain is lashing out at her critics. The former “The View” co-host launched a social media rant against her online trolls and labeled those who criticized her as people with “severe daddy issues.”

On Monday, September 27, the 36-year-old fired back at those who slammed her for often speaking about her late father, Senator John McCain, on her Twitter account. “The stupidest part of my life is being a receptacle for everyone in the world who has severe daddy issues,” she began.

“They haven’t dealt with purging their insanity onto me because I loved mine so much and yes – answer questions about him whenever I’m asked,” Meghan continued. She went on to suggest, “A LOT of you need therapy.”

In a separate tweet, Meghan expressed how she felt after being criticized for frequently mentioning her father. She penned, “Imagine being bullied by people for loving your deceased parent so much.” 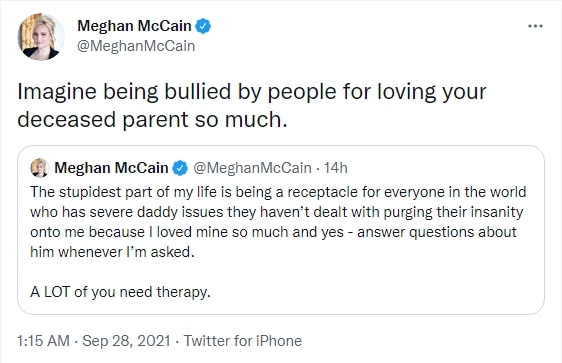 In response, a Twitter user wrote, “Legit 99% of your posts are bullying someone else.” Another, in the meantime, explained that people were actually upset because she “cannot seem to acknowledge [her] privilege for the position that [her] father held and how [she’s] benefited from that.”

Meghan’s father died on August 25, 2018, following a lengthy battle with brain cancer. In a statement shared in the wake of his death, Meghan said that she was by the Arizona senator’s side when he “departed this life.”

“In the thirty-three years we shared together, he raised me, taught me, corrected me, comforted me, encouraged me, and supported me in all things,” she stated at the time. “He taught me how to live. His love and his care, ever present, always unfailing, took me from a girl to a woman — and he showed me what it is to be a man.”

“All that I am is thanks to him,” Meghan continued mourning his father’s passing. “Now that he is gone, the task of my lifetime is to live up to his example, his expectations, and his love. My father’s passing comes with sorrow and grief for me, for my mother, for my brothers, and for my sisters.”

Meghan also praised John, noting that he was “a great fire who burned bright.” The TV personality further elaborated that she and her family “lived in his light and warmth for so very long.”