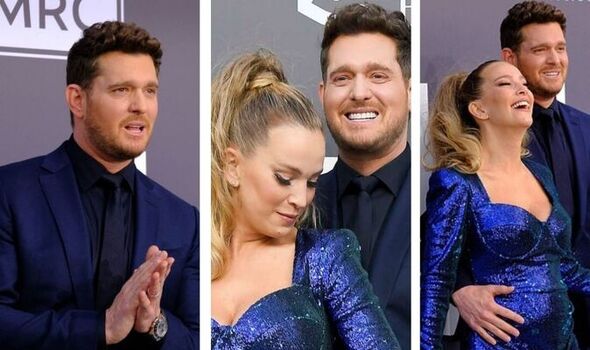 Michael Buble and his dramatic PDA with wife Luisana

46-year-old Canadian crooner Michael Bublé cradled his pregnant wife’s baby bump and smiled from ear to ear, making it clear he is looking forward to welcoming his fourth child with her.

Despite quipping recently that he is “scared” of his wife, after being regularly requested to massage her bum and smooth out her cellulite, the Grammy Award winning star looked proud to have her on his arm at the Las Vegas event.

The 34-year-old wore a glittering royal blue sequined dress with a feather trim at the hem and had swept her wavy blonde hair into a fashionable high ponytail.

Meanwhile, Michael almost matched her ensemble as he flaunted his fit physique in a navy blue suit and tie.

He revealed to People earlier this month that the pair’s family will be complete after baby number four and that they have no plans to welcome any more tots.

“Most likely, it’s the last time [so] I want it to be really special for [Luisana],” he explained.

Addressing his wife’s demands and massage requests, he also told The Sun: “I love my wife so much, but I’m also scared of her.”

Michael Buble and wife in a passionate PDA

Michael Buble and wife Luisana cuddled up to each other passionately at the Billboard Awards 2022, while waiting to welcome their fourth – and “probably last” child together

Michael Buble laughs with his wife

Michae Buble and wife Luisana Lopilato laughed gleefully as they played up to the cameras over the weekend, and he wrapped an arm protectively around her waist

Michael Buble and wife at a previous event

Michael Buble and his wife also look equally glamorous at other red carpet events, as this throwback shot displays