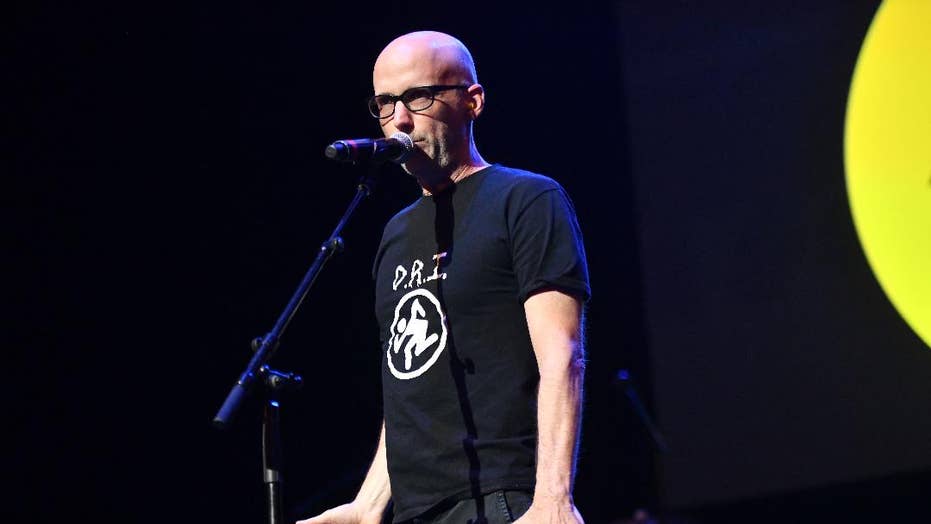 Moby claims he rubbed his penis on Trump in new memoir

Moby writes in his upcoming memoir about his prank on President Trump. He apparently rubbed his genitals on the then-real estate mogul during a party.

Moby has publicly apologized to actress Natalie Portman after he wrote about her in his new memoir, "Then It Fell Apart."

The 53-year-old singer went into detail about his alleged relationship with the Oscar winner, 37, and how he met her backstage at one of his concerts.

He said that she was "flirting" with him in his dressing room and that afterward, he tried to pursue dating her in the early 2000s.

"For a few weeks I had tried to be Natalie’s boyfriend, but it hadn’t worked out. I thought that I was going to have to tell her that my panic was too egregious for me to be in a real relationship, but one night on the phone she informed me that she’d met somebody else. I was relieved that I’d never have to tell her how damaged I was," he wrote in the book.

But Portman shut down the dating claims and said she found him "creepy" back then.

“I was surprised to hear that he characterized the very short time that I knew him as dating because my recollection is a much older man being creepy with me when I just had graduated high school,” the mother of two said in an interview with Harper’s Bazaar UK.

“He said I was 20; I definitely wasn’t. I was a teenager. I had just turned 18. There was no fact checking from him or his publisher – it almost feels deliberate. That he used this story to sell his book was very disturbing to me. It wasn’t the case. There are many factual errors and inventions. I would have liked him or his publisher to reach out to fact check.”

“I was a fan and went to one of his shows when I had just graduated. When we met after the show, he said, ‘Let’s be friends.’ He was on tour and I was working shooting a film, so we only hung out a handful of times before I realized that this was an older man who was interested in me in a way that felt inappropriate,” she added.

At first, Moby declared she was lying in her statement but then backtracked and wrote an apology instead which he posted on social media.

“As some time has passed I’ve realized that many of the criticisms leveled at me regarding my inclusion of Natalie in Then It Fell Apart are very valid,” Moby said in the statement. “I also fully recognize that it was truly inconsiderate of me to not let her know about her inclusion in the book beforehand, and equally inconsiderate for me to not fully respect her reaction.”

“I have a lot of admiration for Natalie, for her intelligence, creativity, and animal rights activism, and I hate that I might have caused her and her family distress,” he added. “I tried to treat everyone I included in Then It Fell Apart with dignity and respect, but nonetheless it was truly inconsiderate for me to not let them know before the book was released.”

“So for that I apologize, to Natalie, as well as the other people I wrote about in 'Then It Fell Apart' without telling them beforehand,” he concluded. “Also I accept that given the dynamic of our almost 14-year age difference I absolutely should’ve acted more responsibly and respectfully when Natalie and I first met almost 20 years ago.”