The fashion world — including top 90s supermodels Naomi Campbell and Cindy Crawford — is in mourning for famed British model Stella Tennant, who sadly passed away suddenly at just 50-years-old

Iconic 90s supermodels, fashion magazine editors and design houses are paying tribute after the news that supermodel Stella Tennant has suddenly passed away at age 50, just five days after her milestone birthday. Her family released a statement to the media about the Scottish-born beauty that read, “It is with great sadness we announce the sudden death of Stella Tennant on 22nd December 2020. Stella was a wonderful woman and an inspiration to us all. She will be greatly missed.” Police who responded to an address in the village of Duns, Scotland near her home said there were “no suspicious circumstances” in her death. 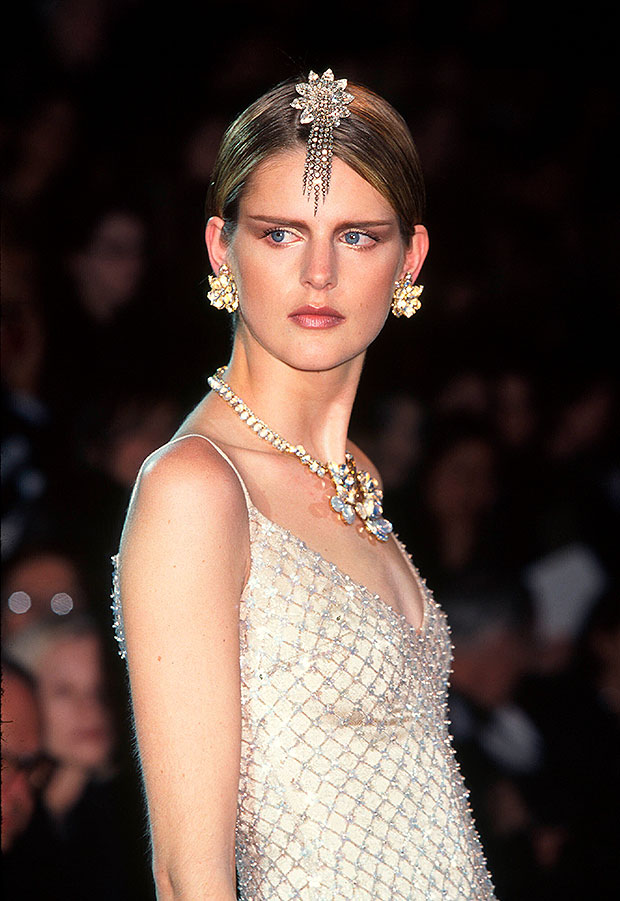 Many of her fellow supermodels took to Instagram to remember the mother of four, who was a 90s icon. She graced the runways of Versace, McQueen, Chanel and more after rising to fame in a 1993 shoot for British Vogue at the age of 22. The late great Gianni Versace even referred to her back in the day as his “muse,” before he was murdered in July 1997. 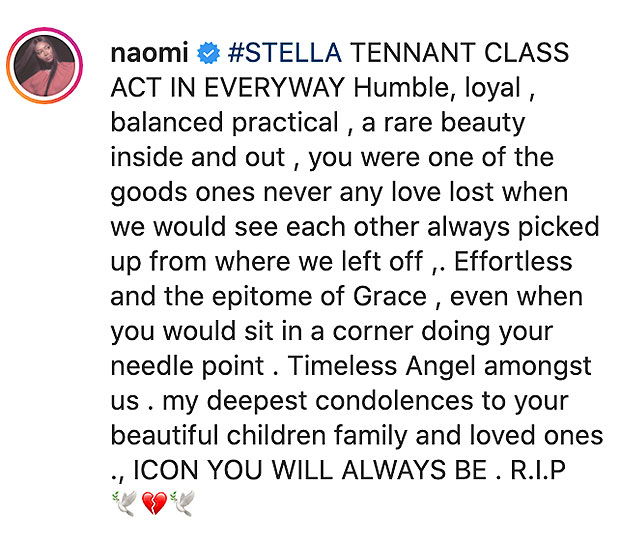 Fellow British-born supermodel Naomi Campbell, 50, posted a series of Stella’s most iconic professional modeling photos to her Instagram. It was clear from the caption how well the two women knew each other. “STELLA TENNANT CLASS ACT IN EVERYWAY Humble, loyal, balanced, practical, a rare beauty inside and out,” she wrote. “You were one of the good ones never any love lost when we would see each other, always picked up from where we left off. Effortless and the epitome of Grace, even when you would sit in a corner doing your needle point. Timeless Angel amongst us. ICON YOU WILL ALWAYS BE. R.I.P.”

Cindy Crawford, 54, shared an iconic photo of Stella in one of her more androgynous looks, wearing a green turtleneck while resting her head against a white horse. “Stella Tenant, gone too soon. I always admired her fearlessness and style. Sending prayers to her family,” Cindy wrote in the caption.

Christy Turlington, 51, reminisced on IG, “I remember meeting Stella in London in the early 90’s. We were dressing next to each other backstage at a show. She was so beautiful and gentle, naked except for her nose piercing and big black boots. I will remember her easy laugh and humble strength. Later, after Stella had become a mother she would beam talking about the kids and the farm and her other ‘quiet’ life. Stella evolved in front of all of our eyes in the most beautiful, relaxed and confident way. I never imagined there was anything she couldn’t do. You are deeply admired, respected and will be missed by everyone you touched in this lifetime.” 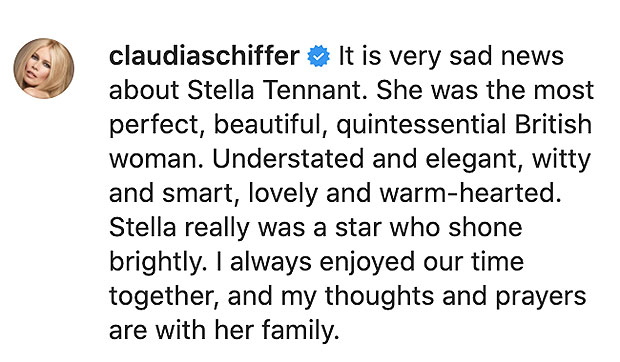 Claudia Schiffer shared several photos modeling alongside Stella, including on a Chanel runway, posing with the house’s late Creative Director Karl Lagerfeld, and another alongside designer Stella McCartney while the Stella and Claudia modeled her designs. The 50-year-old wrote in the caption, “It is very sad news about Stella Tennant. She was the most perfect, beautiful, quintessential British woman. Understated and elegant, witty and smart, lovely and warm-hearted. Stella really was a star who shone brightly. I always enjoyed our time together, and my thoughts and prayers are with her family.” 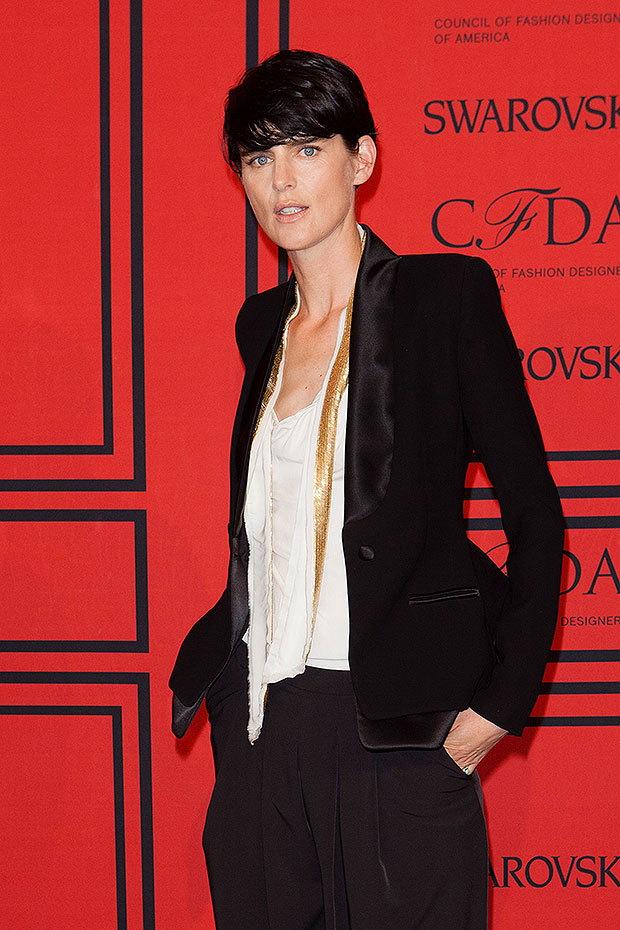 Elle magazine Editor in Chief and Project Runway judge Nina Garcia mourned Stella in a tweet that showed Stella gracing Elle‘s cover and read, “RIP Stella Tennant. The muse, the mother, the fashion icon but also the activist. She mixed fragility and an innate elegance with an androgynous look that inspired designers like Karl Lagerfeld, Pier Paolo Piccioli or Sarah Burton. She also took risks and under the lens of Steven Meisel or Tim Walker, embraced avant-garde creating a powerful fashion iconography that’s impossible to forget. My condolences to her family and friends.”

The official Twitter account of @Versace wrote, “Versace is mourning the death of #StellaTennant. Stella was Gianni Versace’s muse for many years and friend of the family. We will miss you forever Stella. Rest In Peace,” and shred a photo of Stella in a Richard Avedon photo modeling for Atelier Versace Spring/Summer 1996 campaign. Stella was an icon for the label in the 90s under the late Gianni, walking in his shows and starring in the brand’s fashion campaigns. His sister Donatella Versace took over designing for the label after her brother’s murder. She wrote on Instagram next to a photo of Stella modeling a Versace gown, “Stella, I cannot believe you are gone. You have left us way too soon. We met when you were at the beginning of your career. I cherish every moment we spent together. Ciao. Rest In Peace. Donatella.”