When Netflix announced it was paying Shonda Rhimes $150 million over five years to leave her longtime home at ABC and move to the streamer, fans assumed more Grey’s Anatomy-like shows were in their future. Now, Netflix has no less than eight titles in development with "Shondaland for Netflix" as it’s called, and the first series set to premiere is anything but contemporary or hospital-set. Netflix’s Bridgerton Season 1 is based on the Julia Quinn Romantic Universe, a set of interlocking regency romance novels that have delighted readers for decades.

The Bridgerton series is, by far, Quinn’s most successful. But her regency-set universe didn’t start with Daphne Bridgerton’s story in The Duke & I. Quinn had already done three runs at creating interconnected stories set in her version of London’s society ball scene. The first series, Splendid, gave readers American Emma Dunster acting as the introduction to such figures who would go on to appear in all of Quinn’s books, like Lady Danbury.

But Quinn’s first three series only followed one or two close friends or a single pair of sisters to be married off. With the Bridgertons, she gave readers an entire clan, with eight siblings who just so happened to be named in alphabetical order. 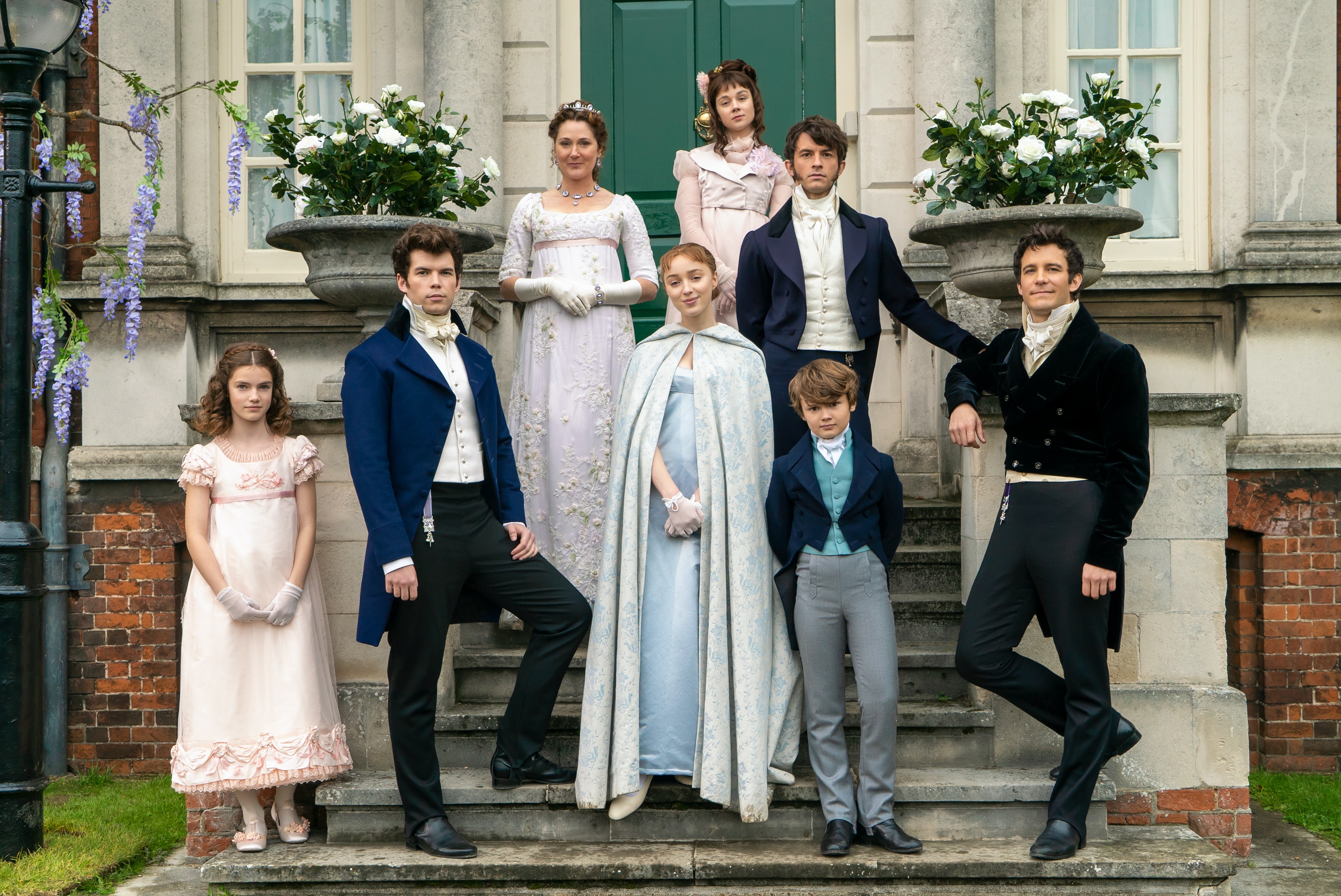 On Monday, Nov. 2, Netflix released the first teaser trailer for Bridgerton, giving fans a look at the family, as well as the world they live in. Perhaps unsurprisingly for fans of the book series, it begins with a delivery of Lady Whistledown’s Society Papers.

In the novels, this gossip sheet is the delight of the upper classes, something no one will admit to reading, and yet everyone knows exactly what, and more importantly, who is in the latest issue.

Making Lady Whistledown more of a centralized mystery in the Netflix retelling helps tie all the storylines closer together. It also means fans may spend Christmas puzzling over Whistledown’s identity, making for a fun holiday indeed.

The full trailer for Bridgerton arrived on Monday, Dec. 14, revealing the romance plot driving the series. Daphne Bridgerton has been declared all but ineligible for marriage by Lady Whistledown, the mysterious society gossip whose word is law. The Duke of Hastings, Simon Basset, is desperate to be left alone by the mothers of every single woman in society. His idea: They pretend to fall in love as the easiest solution to both their problems, making him unavailable and her more attractive to better offers.

But will Lady Whistledown be fooled? Moreover, for their ruse to work, they must appear to be in love. What if one of them accidentally forgets it’s all pretend?

Netflix’s first sneak peek of the series arrived on Nov. 22, giving viewers their first look at the Bridgerton family at dinner. In this scene, Lady Violet has invited Simon Basset, the Duke of Hastings, to join the family for dinner. It’s not exactly the most fashionable of meals, and it doesn’t adhere to how polite society conducts itself. But as Lady Violet tells Simon, they are a tight-knit family. Her large freewheeling dinners, including everyone down to youngest children Gregory and Hyacinth, happen because the family enjoys being together. This is a stacked cast. Let’s start with the Bridgerton siblings: The first novel’s main lead is Daphne Bridgerton, fourth oldest, whose introduction to society kicks off the story. She’s played by Phoebe Dynevor (Younger), and her romance with the Duke of Hastings (played by Regé-Jean Page) is the first central romance.

As for her brothers and sisters:

Other significant characters include the entire Featherington clan, who are great friends of the Bridgertons (and eventually marry into them). They include Nicola Coughlan (Derry Girls) as Penelope, Bessie Carter (Beecham House) as Prudence, Harriet Cains (Line of Duty) as Philipa, with Polly Walker (Patriot Games) and Ben Miller (Death in Paradise) as their parents Lady Portia and Lord Featherington, respectively.

And of course, there are Quinn’s standard characters. Lady Danbury is played by Adjoa Andoh (Doctor Who). Lady Whistledown will be voiced by Julie Andrews (Mary Poppins). And there’s even the real-life Queen Charlotte played by Golda Rosheuvel (Luther), Queen Consort to George III. 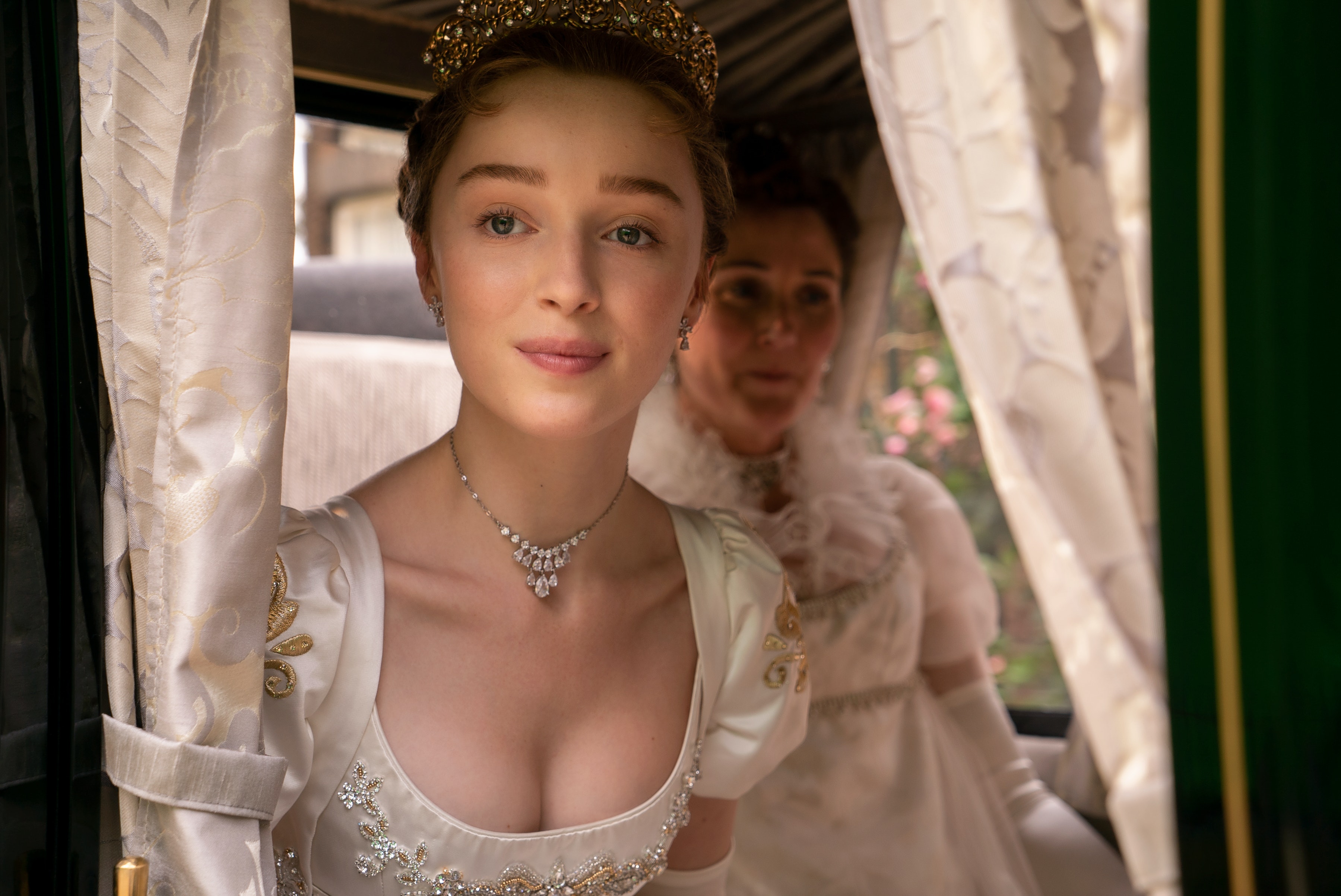 As mentioned above, the series will kick off with Daphne’s introduction to society, as detailed in the first Bridgerton book, The Duke & I. Daphne is a hit at the start of her time on the marriage mart. But her prospects quickly fade, leaving her facing down failure at the one thing she’s supposed to do in life: Marry well. In desperation, she agrees to a ruse with her brother’s best friend Simon Basset, the Duke of Hastings. He’ll pretend to be in love with her, to raise her stock among the men of society. In return, he will get out of having to court interested young ladies because everyone assumes his attentions are already focused elsewhere.

The presence of so many Featheringtons in the cast suggests the eight-episode series could cover up to the first four books of the series, through to the engagement of Colin in Romancing Mr. Bridgerton. If so, that means the series could also dive into Daphne’s older brothers, Anthony and Benedict, from The Viscount Who Loved Me and An Offer From A Gentleman as well. The real question is how far the series plans to go. Everyone assumes there will be at least a couple of seasons here. (I initially speculated the series might do one Bridgerton romance per season. But with eight romances and nine books, that seems a touch excessive; even The Crown is ending things after six installments.) Covering the majority of the Bridgertons getting married in two or three seasons seems more likely.

But should the show be a hit, there are tons more Quinn stories in the catalog. As I mentioned, there’s the Splendid series, followed by The Lyndon Sisters and The Agents of The Crown, in which the Bridgertons start showing up as background characters. And there’s four more trilogies and quartets that follow others in the Bridgertons’ social circles, in which they float about in the background. The family is even the kick-off for the Rokesby series, which is set in the pre-regency era, with Because of Miss Bridgerton.

In short, if Bridgerton wanted to run Grey’s Anatomy style for a decade or more, it’s doable. The first season of Bridgerton arrives on Christmas Day, 2020. All eight episodes will stream on Dec. 25 on Netflix.

This article was originally published on Oct. 15, 2020