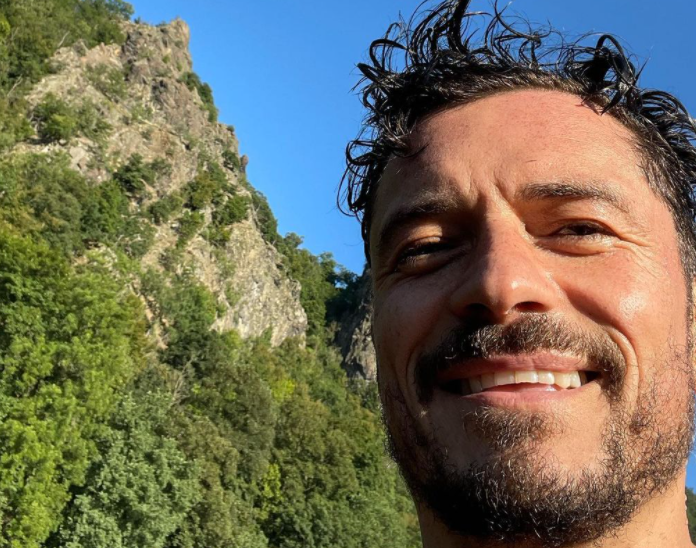 Five years after those incredibly infamous photos of Orlando Bloom paddle-boarding in the nude, he’s once again shown off his proclivity for getting his gear off.

Loving nothing more than the sweet caress of a lake’s water against his skin, the Pirates Of The Caribbean star was at it once more as he shared an insight into what makes Orly tick.

Getting to grips with nature, Orlando shared a video of himself frolicking in the water, having a wow of a time, as he screamed while doing some backstroke: ‘Ah, so amazing!’

While it’s not clear whether he was skinny dipping this time around, he still made his thoughts on nudity abundantly clear when he then shared a snap of himself sans clothing by the side of the lake – save for a piece he held over his bits – in the four-part Instagram carousel to get his followers’ motors revving.

To really bring the message home, he popped a peach emoji over his backside and tagged fiancee Katy Perry. Classic.

Despite only sharing three splash emoji as the caption, his post set off his followers, with famous friends loving the series.

It comes only a few years after images of Orlando and his package went viral when, in 2016, he was pictured proudly paddle boarding naked with Katy in Sardinia.

As the singer sat cross-legged on the board in a bikini, the actor knelt behind her wearing a cap, sunglasses and his birthday suit while rowing away, all with his penis out.

Referring to the images coming to light, Orlando previously told Howard Stern: ‘The publicist called to say, “That is not the worst of it. First of all there were pictures with a block over it”.

‘And you make some jokes like, “Have you got a black box big enough to cover it”. And then you suddenly realise somebody is going to uncover the black box because they are going to be paid enough.

Still, it hardly surprised Katy, who told The Project: ‘He is quite the exhibitionist, he’s an adventure junkie as well.’