Andrew Scott is on a roll. His stock couldn’t be higher since appearing on TV as Sherlock’s nemesis Moriarty and the ‘hot’ Catholic priest opposite Phoebe Waller-Bridge in Fleabag.

Now he’s storming one of the West End’s biggest stages in Noel Coward’s 1942 comedy about an overwrought and over-sexed thespian. And the brown-eyed Irishman gives a positively cyclonic performance. 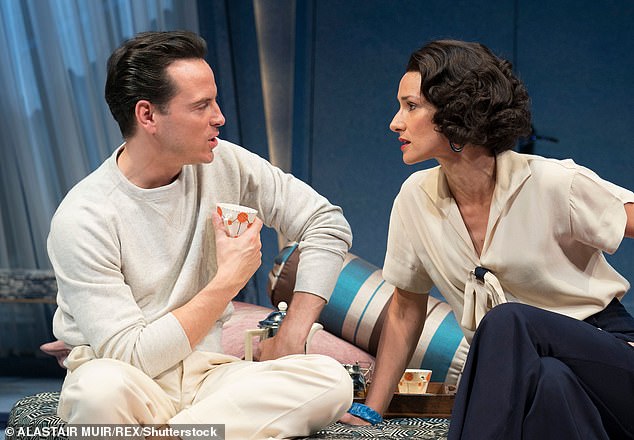 Andrew Scott is storming one of the West End’s biggest stages in Noel Coward’s 1942 comedy about an overwrought and over-sexed thespian. Pictured, Andrew Scott as Garry Essendine, Indira Varma as Liz Essendine

His character is the flamboyant Garry Essendine – a self-portrait by Coward mocking his own grandiosity and sexual peccadilloes. The big change is that Matthew Warchus’s clockwork production hijacks the play as a gay comedy and gives Garry two male suitors.

Warchus may think Coward would approve because he was gay himself. I think he might have found it a bit obvious. He valued irony, evasiveness and poise over social crusading and he says as much throughout the play. There’s also a slight coarsening of the tone with Scott sometimes launching himself about the stage like Basil Fawlty.

Should we worry about this? Scott’s fans won’t. He has a warm, excitable slightly mumsy following and he rides their adulation with unbounded relish. He serves oodles of ham early on as he sees off a female admirer: he’s all gushing histrionics with wrist pressed to forehead. At other times he’s sulky, sly and acid. But as the plot escalates, it’s face in hands, fingers running through hair and arms flung into crucifix position. 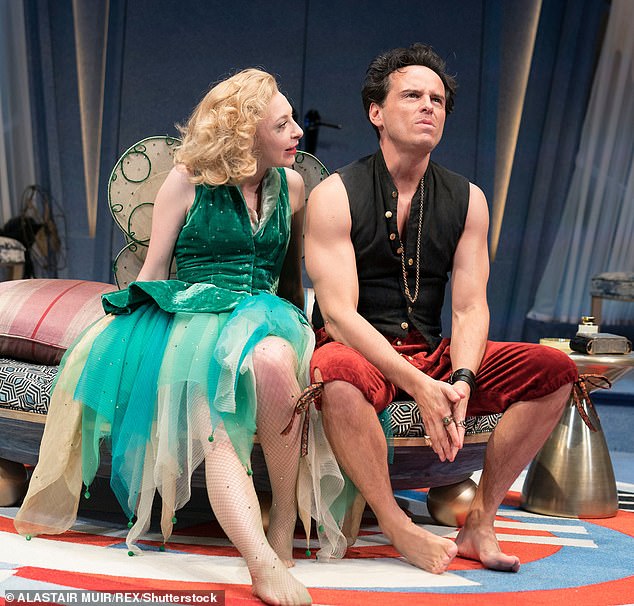 Kitty Archer as Daphne Stillington with Andrew Scott. His character is the flamboyant Garry Essendine – a self-portrait by Coward mocking his own grandiosity and sexual peccadilloes

The more carried away he gets the more he sounds like Graham Norton and the bigger laughs he wins. But when he smooches with Enzo Cilenti as his Latin lover, the huge Old Vic falls into hallowed silence. Can Coward’s frivolous comedy take such earnestness? I don’t think so, but we’re soon back into the ding-dong, door-banging mayhem.

Rob Howell’s staging, though, is unmerciful on the eye. It’s a spread-eagle Art Deco edifice in bright speckled blue. Along with music from The Doors to The Shirelles’ song Tonight, the idea is to jar us out of cosy expectations. 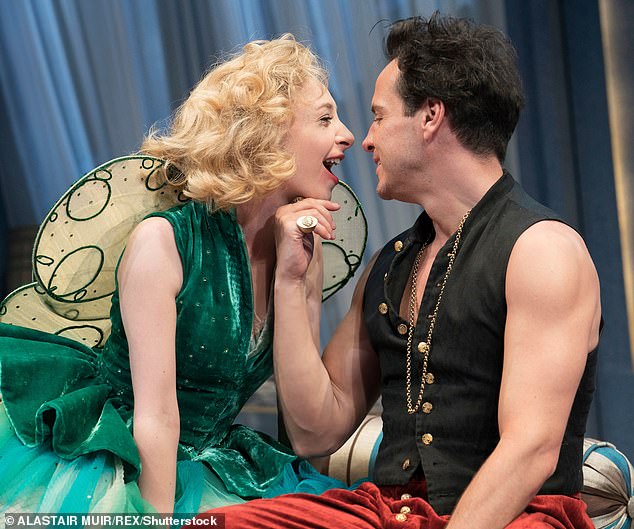 But gorgeous and colourful as the supporting acting is, the show belongs to Scott. He eats it alive. Pictured with Kitty Archer as Daphne Stillington

Coward’s trademark silk dressing gowns are openly ridiculed. And if Indira Varma as Garry’s wife adds Cowardian elegance and froideur in a range of stunning outfits, Sophie Thompson keeps up the show’s eccentricity with a Jean Brodie-ish turn as Garry’s secretary.

But gorgeous and colourful as the supporting acting is, the show belongs to Scott. He eats it alive.

Even Coward takes a back seat.