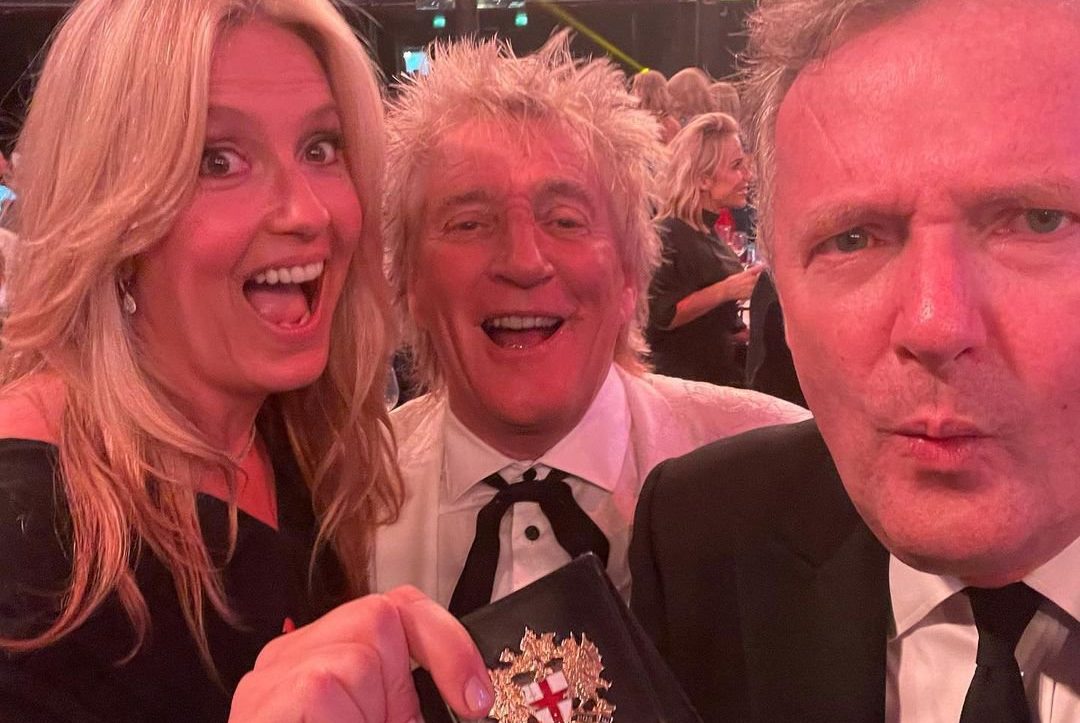 The trio met up at The Sun’s Who Cares Wins awards at London’s Roundhouse on Tuesday, just before it was announced that Piers would be returning to the publication as a columnist.

With the drinks flowing and spirits high, Piers enjoyed a catch-up with married couple Sir Rod, 76, and Penny, 50, but the latter couldn’t resist an opportunity to exert her power over the former Good Morning Britain presenter.

In his latest Instagram post, Piers was seen posing with the couple as Penny gleefully flashed her police badge at the camera.

He added: ‘Not easy going on the lash with Rod Stewart these days – his fabulous wife Penny is now (very admirably) a special constable with the City of London Police, and carries her warrant card around with her to bring an immediate halt to any excessive partying…’

Penny, a former model, received her badge in April officially becoming a Special Constable. She announced her plans to join the City of London police force in June 2020 after being inspired by her appearance on Channel 4’s Famous and Fighting Crime in 2019.

Recalling her stint on the programme, Penny previously told her Instagram followers: ‘It was terrifying, terrifying, but I never felt more comfortable in a position and I felt like this was where I was supposed to be.’

She’s since been spotted on the beat several times, including when she was pictured working until 4am with Divisional Commander Ian Miller MBE in August. Earlier this summer, Penny was also seen taking no nonsense on her rounds as she scolded a man for public urination.

As part of the global deal, Piers, 56, will launch a new TV show in early 2022 to air on weeknights in the UK, US and Australia, while also presenting a series of true crime documentaries.

The channel is a new deal between News Corp and Fox News Media, with Piers also taking on a role as a columnist for The Sun and the New York Post.

It comes after he quit Good Morning Britain in March following complaints about his comments on Meghan Markle and Prince Harry, but Ofcom recently ruled that he had the right to freedom of speech.