Rosario Dawson and Cory Booker are now living together in Newark, NJ! The pair began dating in 2018 after meeting at a charity event.

Rosario Dawson, 42, and Cory Booker, 52, moved in together last year — and their relationship seems to be stronger than ever! “It was an amazing adventure,” the Men In Black II alum said to People magazine. “My family are all in New York. It felt really beautiful and good to start a new chapter of my life in the driver’s seat,” she added of moving in with the New Jersey senator.

The couple are now living in Newark, New Jersey — and Cory can’t help but “get upset” when the former New Yorker has a laugh about Jersey life. “New Yorkers appreciate New Jersey because you have a great view of New York,” she hilariously said.  Rosario shared that the move kicked off with a road trip involving her dad Greg Dawson 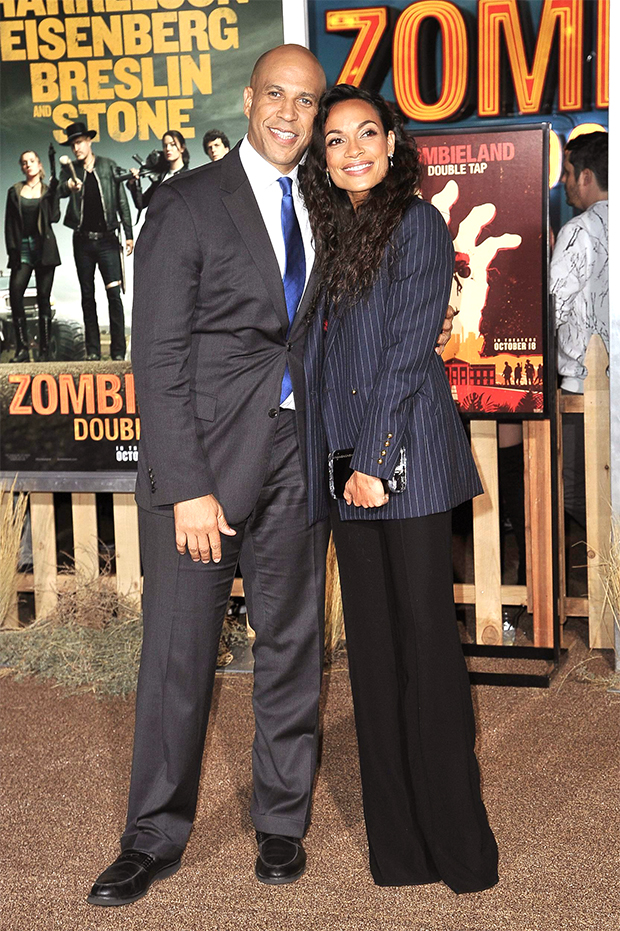 “My dad has [pancreatic] cancer right now, I’ve been leaving every other weekend for his chemo treatments,” she explained, adding that the she drove to Newark in a 29 foot RV with her dad.. “Yesterday we were filming and they worked it out so I could go home just an extra couple hours so I could be with my dad, and then do my screening, then come over here,” she added of his illness.

Rosario and Cory first met at a charity fundraiser back in 2018, and have had a solid romance ever since! Last June, she confirmed that the pair would be moving in together and couldn’t be more excited — especially since they had been apart for 4 months. “My boyfriend. I haven’t seen him since February. He is by himself, going between Newark and DC,” she said in 2020 at Kevin Smith‘s Jay and Silent Reboot popup. “I’m actually in the process of moving, by the way. I’m going to New Jersey. I’m moving to Newark. We were thinking about moving in together anyway, but especially during all of this, it’s been really intense…I’m excited,” she added.

The move seems to have gone well from Cory’s POV, too. “This is the first time in my life I’ve really lived with somebody, and obviously Rosario and I are enjoying and adjusting to that,” the politician said to BuzzFeed months later. We can’t wait to see these two tie the knot!