Salma Hayek is standing by her man.

On the Armchair Expert podcast, per People, the actress opened up about her family life and the media criticism that has surrounded her 15-year relationship with François-Henri Pinault, the CEO of luxury fashion group Kering.

After cohost Dax Shepard admitted to Hayek that he didn’t know much about her husband other than him being “really rich,” the actress acknowledged a common public misconception: that she married for money.

“You know the thing is that in pictures you cannot begin to guess the magic in him. He’s made me become a much better person, and grow in such a good, healthy way,” said the actress, who married Pinault on Valentine’s Day in 2009. 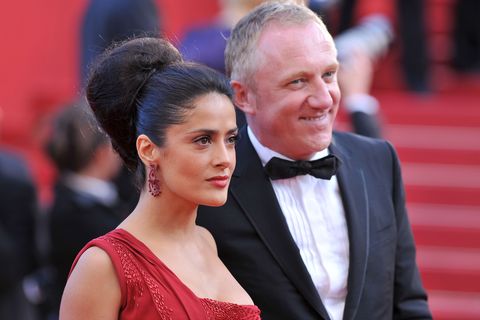 The actress went on to praise Pinault for being a hardworking husband who always makes time for his family. Hayek and Pinault share a 13-year old daughter, Valentina Paloma Pinault.

“We’re touching on a very interesting conversation. There is a discrimination also to rich men. Immediately you think because somebody’s rich, [they] might not be a good person, might be somebody materialistic, might be somebody that doesn’t have values, might be somebody that is even stupid or that doesn’t deserve it [or] that in order to have a lot of money, you did it the wrong way, there is all this preconceptions and I heard them, by the way,” continued Hayek. “My guy, finished work, no matter how hard it was—and trust me he has a lot of responsibilities—big smile on his face, happy to be home, happy to see me and the kids, make us laugh. … They cannot begin to imagine what a joy that human being is.”