Hollywood is full of fake relationships (I WON’T BE NAMING NAMES) and PR stunts, but you know two people who are definitely, genuinely in love? That’d be The Bachelorette’s Wells Adams and Modern Family’s Sarah Hyland, who announced their engagement after two years of dating. Which is basically a lifetime, considering we live in a world where most celebs wait approximately three weeks before getting engaged and married (ahem, Mr. Bieber and Ms. Baldwin).

Our May cover star told us that it took DMs, text messages, voice memos (dayum), calls, and FaceTime calls before she and Wells actually met in person and went on an actual date. “It’s the most millennial thing in the entire world,” Sarah says about the early days of their relationship, “I kind of want to gag at it.”

They, too, have had their own struggles in their relationship—she admits that she has a temper, but is on a medication that causes mood swings. “This is the first time I’ve been in a relationship where I’m like, How am I the child in the relationship? I’ve always been the adult,” she says. “So it’s mostly me having to work on my shit.”

As Bachelor Nation prepares for Wells and Sarah’s wedding, let’s take a look back at their infectiously sweet relationship, starting from the very beginning: when Wells was one of 26 contestants vying for JoJo Fletcher’s heart.

Bachelor stan Sarah makes it clear that just because she talks about how guys on the show are hot doesn’t mean she’s crushing. (Yeah, that turned out to be a lie!)

Those who think I have a thing for any of the guys on the bachelorette? Think again and stop reading into things i say! I’m simply a fan.

Sarah watches Wells on the Men Tell All Special and tweets about how great he is. Which, by the way, he screenshots and retweets two years later:

Sarah and Wells flirt on Twitter while he’s on Bachelor in Paradise. Reading these tweets while knowing what’s coming is better than any romance novel, FACT.

I’ll start working on my garnishing skills. Oh and I require 35% of your tips…. or free dogs. https://t.co/0Zt4Tp94oS

E! News reports that Sarah has broken up with her boyfriend Dominic Sherwood after dating for two years. A source says, “It’s genuinely mutual and amicable, and they truly remain friends.” 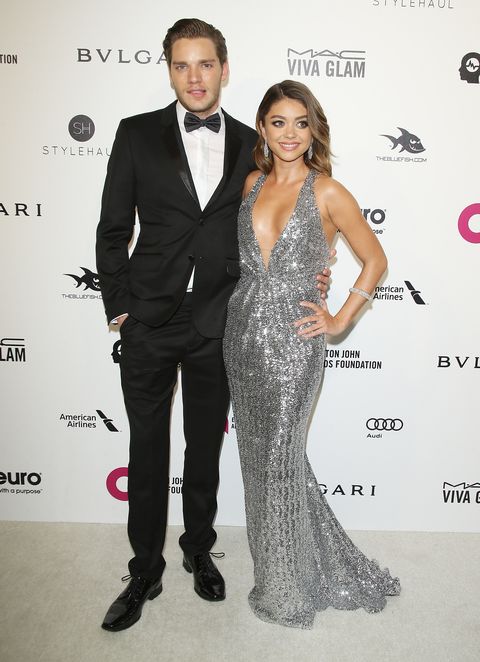 Sarah confirmed with SELF that she underwent her second kidney transplant (where her younger brother donated his organ, FYI) during this time. And as our May 2020 cover star, she tells in her cover story that she and Wells had only gone on two dates just before her major medical procedure. He even flew from Nashville to LA on the weekends just to be with her during her recovery KNOWING her family was going to be there too.

Meeting the fam before anything’s official. CRINGE. But, if this ain’t true love???

Wells and Sarah are clearly hanging out at the same place, at least according to Instagram Stories. 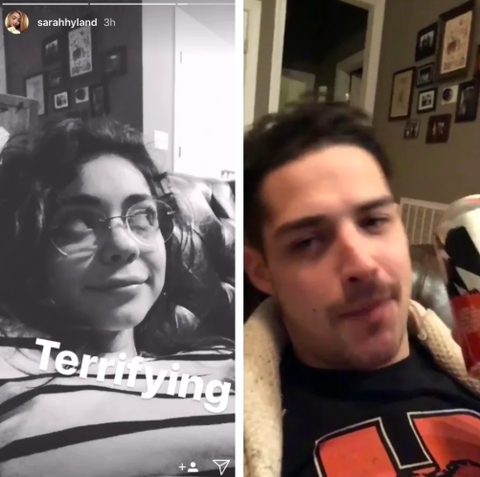 And she even spilled to us that they were already telling each other that they were falling in love and talking about what kind of weddings they wanted. Yeah, I’m wondering how in TF this is real life too. Why can it be this easy for all of us?!?!

They wear a couples costume for Halloween, which causes the entire internet to spiral with rUmORS and SpeCULatiOn.

Wells and Sarah make it more than clear that they’re officially a couple, or at the very least…making out with each other in dim lighting:

E! News reports that they are dating, with a source musing, “It’s true. They are a couple. She has been spending time with him in Nashville and he is showing her around and doing fun activities with her. Wells is proudly introducing her to all his friends and is really happy that they connected. They are taking it slow but are not seeing other people.”

Things move fast, because Wells and Sarah end up spending Thanksgiving together. But we don’t see pics until a full year later.

Our thanksgiving was so amazing we forgot to take pictures. So here’s one from a year ago. I love and am very grateful for my turkey ❤️

Wells puts all other boyfriends/humans to shame by posting the most romantic birthday post that has ever been written.

Top 5 ways helicopters are like Sarah: 1. They make you feel like you're floating. 2. Every moment with them is an adventure. 3. They make you feel like you're falling, in the best way. 4. They defy gravity. 5. They are really fucking cool Happy birthday @sarahhyland. You're my favorite thing. Everyday should feel this good. Thanks @vineyardvines for helping out with this amazing date!

Excuse me while I go get mad at my significant other for not writing me this exact post on my b-day.

Wells and Sarah spend Christmas together with Wells’ family in Nashville—a pretty big step considering they’d only been dating a few months!

I had the best Christmas in Nashville. Full of laughs, animal onesies, food, dance offs, fake teeth, the cutest kids in the world and @wellsadams’ amazing family. Thank you for sharing such a special Christmas with me!

Naturally, they share a New Year’s Eve kiss. As if they’d pass up on posting content that cute on social.

Best midnight ever. #nye #nyc ❤️🥂Photographs by my dear @diodiehard

Wells and Sarah hit up their first major event together (Entertainment Weekly’s SAG Awards nominees party) and naturally PDA all over the place. 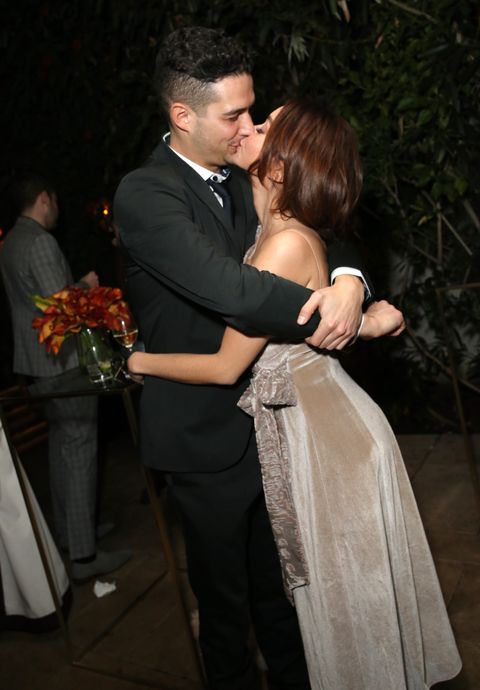 Sarah rivals Wells’ “happy birthday” posting skills with this cuteness. And FYI, the picture was taken shortly after they said “I love you” for the first time:

This picture was taken three days after three words were exchanged. My smile has only grown, my heart has only deepened, and my world has only gotten better ever since. @wellsadams? You are the most phenomenal man I have ever met and I am the luckiest woman in the world to have you by my side. Thank you for calling me baby even when I’m acting crazy. Happy Birthday Llama! Hey… #toplutoandback #myperson

I kissed this beautiful woman for the the 1st time a year ago today. Best year of my life. I love you to Pluto and back @sarahhyland

Wells and Sarah celebrate their one-year anniversary with more cuteness that legit gives me FOMO even though I’m in a relationship.

A couple hours after we took these pics, @sarahhyland said “when are you going to ask me to be your girlfriend.” I said, “right now.” I then doubled down and said “I’m falling in love with you.” She responded with, “I can’t say that yet.” And then like 15 minuets later she did. Happy anniversary, baby. I love you most.

Another year, another Halloween costume.

The blood in our veins are a mix of hot sauce and royalty. #tacobelle it’s a family thing. ❤️ 📸: @free_connor

Taco Bell, get it?

Oh, and another year, another insanely cute birthday post from Wells. Damn, he’s good at this.

It’s that can't-eat, can't-sleep, reach-for-the-stars, over-the-fence, World Series kind of stuff. Happy birthday @sarahhyland! You’re perfect and I love you most. Now pack your bags, cus baby, we’re jumping on a plane and heading down to the islands tomorrow!

We’re good at making out and shit. Also, we panicked. @sarahhyland @lakers

The pair gives us a glimpse at what their Valentine’s Day is like. Answer: predictably adorable.

With you I feel like I’m on top of the world & I’ll always catch you if you fall… no matter how high we climb. I love you to Pluto & back @wellsadams ❤️ I am so grateful and appreciative of everything you do for me. #happyvalentinesday #myperson

Sarah and Wells hit up the Vanity Fair Oscars Party and take a series of truly incredible red-carpet photos.

Wells says his and Sarah’s parents have never met because of their differing politics. “They both fall on opposite sides of the political spectrum and I’m just sure someone’s going to get into a fight about something,” he said. “It will be liberal actors and my dad and my family, who are a bunch of conservatives. My dad’s a doctor; my brother-in-law is from oil money in Texas. It’s going to be so weird.”

Patriotism, but make it romantic.

It’s the moment you’ve been waiting for! (If you are still reading this timeline, bless you.) Sarah and Wells get engaged on a beach and it’s freakin’ cute as hell:

That can't eat, can't sleep, reach for the stars, over the fence, world series kind of stuff ✨❤️ @wellsadams

That’s it for now, but don’t worry, we’ll be updating this timeline with new supersweet details as they emerge.