Well. That’s sure something. WandaVision had been teasing a massive cameo, and while we’re not sure Episode 5, titled “On a Very Special Episode…” was the cameo everyone was waiting for, it sure had a big one that will make quite the Marvel Cinematic Universe impact. Wanda’s brother, Pietro, had been mentioned a few times before, and at the end of the episode, after an unexpected ring of the doorbell, there he was: played by Evan Peters, who played the character in the X-Men movies, rather than Aaron Taylor-Johnson, who played the character in Avengers: Age of Ultron. Shocker.

In yet another WandaVision episode filled to the brim with things to unpack, that’s certainly going to be the biggest one. For MCU fans unfamiliar with the X-Men world, Dr. Darcy Lewis (Kat Dennings) said it best: “She recast Pietro?”

And as fun as it is to hear non-super MCU characters like Monica Rambeau, Jimmy Woo, and Darcy talk about the events of Avengers: Endgame, and who came closest to defeating Thanos, in the same way the fans would, it’s a great way to take a step back and remember that the X-Men movies don’t exist in this world. These characters have no idea why he would look different.

But since Disney bought 20th Century Fox back in 2019, the MCU has had the right to use any character from the X-Men world. They’d been expected to recast their own X-Men, and Fantastic Four, while the only character expected to carry over was Ryan Reynolds as Deadpool. But it looks like, at the very least, Evan Peters as Pietro Maximoff/Quicksilver has made the jump. And that could change absolutely everything.

Evan Peters’ presence as Pietro Maximoff means the MCU has officially opened up its Multiverse.

This is not the Pietro Maximoff anyone—including Wanda (Elizabeth Olsen) herself—expected to see. Our Pietro, complete with his thick Eastern-European accent, was killed by Ultron in Sokovia during Avengers: Age of Ultron. The audience knows this. Wanda knows this. The non-super characters know this.

That’s not the X-Men version of Quicksilver/Pietro, though. The MCU has hinted that it’s headed toward a multiverse—the first Doctor Strange included some references to this, the sequel, which Wanda will appear in, is titled Doctor Strange and the Multiverse of Madness, and the upcoming Spider-Man 3 will supposedly feature past iterations of Spider-Man (Andrew Garfield and Tobey Maguire) and villains (Alfred Molina and Jamie Foxx) alike—and that’s the beginning of what we’re seeing here.

It remains to be seen, however, how this version of Pietro made it into this world. Peters played the character in X-Men: Days of Future Past, X-Men: Apocalypse and Dark Phoenix, so viewers of the X-Men version of things (movies which never featured Wanda/Scarlet Witch in any form) will be particularly surprised.

One guess? Wanda may not actually be in control. She’s definitely aware of what’s happening around them, and her storming out of the bubble to have a face-off with SWORD made that clear —and Vision (Paul Bettany) sure is getting that too—but we’ve never known this character to be a liar. If she says she’s not doing it, she may really not be. And she certainly wouldn’t have any knowledge of this version of her brother—everything else, in the universe, particularly the show’s commercials, have been something that would’ve already existed in her mind. Someone else might be intervening here.

What does this mean going forward for the MCU and the Multiverse? 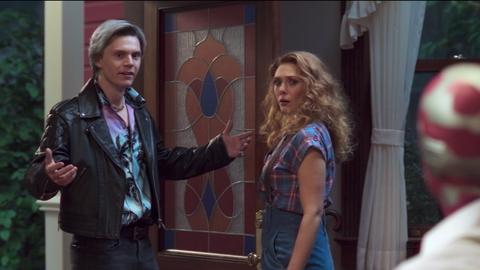 It means a whole lot. Let’s start with the short term—we have no idea where WandaVision will now go. In the MCU’s version of things, Wanda and Pietro’s parents were killed in Sokovia by a Stark Industries bomb. In the X-Men version of things, Quicksilver’s secret father is one of the most famous superhero characters ever, the anti-hero/villain (depending on who you talk to) Magneto/Eric Lehnsherr. Could we wind up seeing Michael Fassbender or Ian McKellen (both of whom have played Magneto in the X-Men movies) in WandaVision? At this point it’s certainly not off the table.

But even more short term than that, WandaVision is going to have to explain how the hell this happened. We’re still in sitcom land, so Quicksilver has shown up in Wanda’s world—now being called ‘The Hex,’ thanks to Darcy—as a Fonz-eseque greaser type. Darcy thinks Wanda just picked another actor and recast, and it’s not even entirely clear if Wanda knows what happened. She senses this is her brother—or a version of her brother—but she’s not entirely sure how. It’s possible that someone else (maybe Agnes, but we’ll get to that another time) is controlling things and not Wanda.

But this also opens the world not only for X-Men and past Spider-Man characters, but even for other tangentially-related characters and worlds that could show up. We don’t know what kid of deal Marvel Studios and Sony made to keep Tom Holland’s Spider-Man within the MCU, but it’s certainly possible that we could see a cross-over with Sony’s animated Spider-Verse world or even the live-action (and deliciously campy) Venom franchise. We’re not saying to expect it, but certainly don’t write it off. That’s the magnitude of what this tiny cameo has done.

And we can’t wait to see how it all plays out.