Over her long and distinguished career, Meryl Streep has played remarkable women – and in the process shown that she is no less remarkable herself. From Karen Blixen (Out of Africa) and Margaret Thatcher (Iron Lady) to Julia Child (Julie & Julia) and Katharine Graham (The Post), Meryl has captivated audiences by investing her own formidable self into one compelling performance after another.

With dignity, self-composure and her often regal bearing, she has made her mark as arguably the greatest exponent of female empowerment in the annals of cinema. 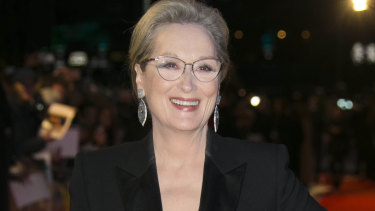 “My mother gave me the feeling that women can be everything if we really want it and work hard for it.”Credit:AP

"I've been fortunate to have been at the right place at the right time," Meryl observes. "Early in my career, I had the chance to play many pioneering women's roles at a moment in Hollywood when those films were very popular and I've been able to continue playing those kinds of parts more recently.

"I feel very proud to have been able to work in films where the women I'm portraying are very central to the story. We need to make more films that present women's lives as authentically as possible and tell more women's stories."

Meryl's screen personae display an unmistakable grace under pressure that derives from her own innate self-confidence and sense of purpose. In keeping with a distinctive feminist identity that took shape during her undergraduate years at New York's Vassar College, Meryl has long agitated for women's rights.

It's hardly surprising that she has taken her place as one of Hollywood's most vocal proponents of the #MeToo movement. It's a role she was born to play, having learnt valuable life lessons from her mother and grandmother that made her determined to escape the restrictions that a patriarchal society had imposed on them.

"There was no more brilliant person or interesting person than my grandmother. She was a very influential person in my life, very intelligent. She brought up five children who were all well-educated and independent-minded.

"And yet she was not allowed to vote. She's still very vivid in my memories, and I still shudder at the thought that she didn't have the opportunities that I have had."

Adds Meryl: "My mother was also someone I looked up to and loved very much. She had a dynamic personality and a very positive and enthusiastic outlook on life that I often wished I could have had when I was a teenager or in my 20s.

"My mother always told me that she believed in me and that I could achieve anything I set my mind to, that there were no limits. She gave me the feeling that women can be everything if we really want it and work hard for it … And my grandma was a brilliant woman with a very strong character who was always telling me to stand up for myself." 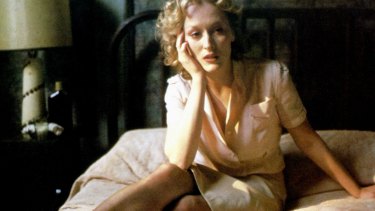 Meryl turns 70 on June 22 and she remains as active and engaged today as ever. In person, she displays a ready smile and light-hearted manner. She prides herself on having raised four vibrant and independent-minded children with her husband of 40 years, the noted sculptor Donald Gummer. Meryl followed the example of her mother in encouraging her children to develop their talents to the maximum, often playing "bad cop" to her husband's "good cop".

"Teamwork is everything. My husband Don was … very involved. He was a little more relaxed when it comes to raising kids. I was more of a tiger mom."

"When my son Henry was little, he wanted to learn to play the piano but the teacher we hired was not very good, and Henry lost interest. I thought he should continue to take lessons, but my husband thought it was my dream that I was trying to impose on him. Today, my son is 37 and he's a musician. Tigermom Meryl was right."

When it came to her three daughters, however, she recalls repeating the words of admonishment that her own mother doled out to her.

"My daughters would often ask me why they couldn't do certain things when everyone else was doing them and I would just tell them, 'I don't care what other kids are doing.' And I remember my own mother saying those words to me."

It was during those years that Meryl realised that, ultimately, all mothers are "the task masters". Looking back, she admits she may have been a tad too involved in her children's lives. 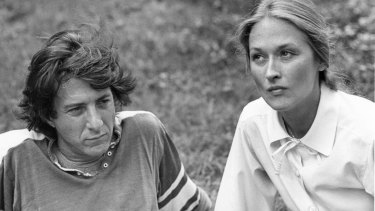 "You sometimes forget that they grow up. You treat a 14-year-old like a 10-year-old out of habit. A teenager doesn't like that at all. Then there are breaks in your communication that you need to overcome. That's not always easy. I'm sure I was too protective at times – kids need to learn to stand on their own two feet."

Over the course of 25 years, Meryl and her family lived on a sprawling property in Connecticut where she could remain relatively anonymous and not be constantly reminded of her celebrity while organising luncheons with other mothers and participating in school events. It was one of the "happiest times" of her life.

"It was my oasis – I had so much pleasure in watching over my children, being as much of a confidante as possible, and enjoying everything that came with helping them grow into independent young people." 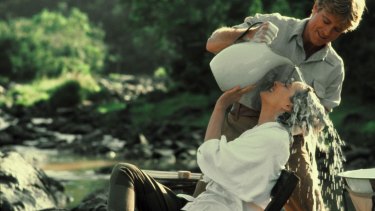 Meryl in Out of Africa, 1995.Credit:Alamy

Seven years ago, once the last of her children had moved out of the house, Meryl and her husband relocated to the Tribeca area of New York City. She takes great solace in having found a man who was confident enough in his own identity to never feel overshadowed by his famous partner.

"I also remember as a little girl watching my mother asking my father for money to buy us shoes. I thought: 'Why should she have to ask him for the money if they are married?' My father worked outside the home, and my mother was an artist for an advertising agency who was working at home and earning less. But it seemed unfair having to ask for everything. So I swore to myself that I would never have to ask a man for money."

She is grateful to have found a partner in Gummer who was "always happy to look after the children" so that she would feel "not as guilty" about taking off for several months at a time to ply her trade. 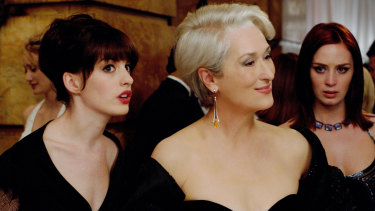 Meryl is generally satisfied with having lived a full and active life as she approaches her 70th birthday. She feels she made the right choices when it came to work and family, especially when she relaxed her film duties so she could better tend to her then-teenage daughters. 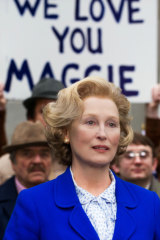 Following that time away, Meryl shot back into prominence with massive box-office hits such as The Devil Wears Prada [2006] and Mamma Mia! [2008] prior to collecting her third Oscar for playing British prime minister Margaret Thatcher in The Iron Lady [2011]. Last year saw her earn a staggering 22nd Oscar nomination for her work in The Post. It is all part of a glorious career that has seen her indulge her creative passions.

"It's fascinating to be able to probe the life of another person and take yourself on another person's journey," Meryl says. "You're also trying to get at the truth of another person and feel inspired by their lives and hopes and dreams. I always found that acting gave me so much confidence when I was starting out because as a young woman I often felt very misunderstood and I worried about the kind of impression people had of me.

"Acting has always been a great form of therapy for me because the more I try to understand the women I'm playing, the more I understand something about myself."

Given her penchant for portraying complicated women, it follows that Meryl's next major role will be lending her gravitas to the second season of critically acclaimed series Big Little Lies. Having already paved the way for a host of female-driven industry projects by virtue of an all-star cast and production team that includes, among others, Nicole Kidman, Reese Witherspoon, and Laura Dern, the Emmy- and Golden Globe-winning show has been praised for its gritty portrayal of real, complex female characters. 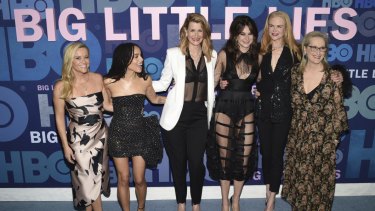 "I'm playing someone who is dealing with whatever the deficits of her parenting were, and the mysteries in that, and how you can't go back in time and fix something," she reveals.

"All of those issues were interesting to me, and it felt real, and honestly investigated. I felt like I had something to give to this piece; this series is a provocative act of emancipation and a reflection on male and female power. And for me personally it touches on the issue of women have the right to greater choice in life."

Meryl's inclusion draws a link between the old and the new. Even more so than being a crucial platform for young actresses such as Shailene Woodley, the show was a reflection of the huge sea change currently overhauling Hollywood from the inside. Meryl offers natural talents and considerable gravitas to the occasion – but her joining the cast on the eve of her milestone birthday is a timely reminder of her enduring power to connect with audiences and the huge esteem in which she is held by her fellow female screen-stars, many of whom have had easier journeys to the top of the industry because of her trail-blazing.

"Look, women are freer and more independent compared to when?" she muses. "Forty thousand years ago, maybe. It's a fairly recent emancipation. We should be careful not to overestimate the actual freedom of women today. Just because we have more say and we walk around in pants more than we did before, that doesn't mean that we have left the [repressive and discriminatory aspects of] the 20th century behind."

True to form, though Meryl has few regrets in life, she continues to offer life lessons for younger women.

"Sometimes women get mixed up and think that if they're more beautiful, they'll be more loved; if they look better on the outside, that's what will make them important or loveable. The idea that their beauty will give them meaning in the world is wrong.

She believes women need to take advantage of the current resurgence of feminism and resist any tendency to be complacent.

"We have to be very vigilant. Younger generations of women may not be aware of how hard it was just to get to where we are today. Many young women who have reached positions of power may not think that the fight still needs to continue.

"Those of us who are older remember how it wasn't that long ago that a lot of professions and positions of influence were closed to women. In the 1970s, there were very few women doctors, lawyers, and virtually no CEOs. And even today we still have a long way to go to achieve pay equality not just in Hollywood but in all professions."

Meryl believes there is no turning back the clock. The biggest life lesson she feels women need to embrace is to learn to speak up.

"[We're in a period] of significant change, not just in Hollywood but in every office and corporation in America and all over the world," she says. "Women have had it with being polite and silent."

To read more from Good Weekend magazine, visit our page at The Sydney Morning Herald, The Age and Brisbane Times.