Bella Hadid is a supermodel, but she never forgets where she came from.

Bella took to Instagram on August 31 and reminisced about her first job as an acai bowl maker. “15 yr old Me @ my first job would have never expected to have achieved what is about to happen tomorrow…I am so grateful!!!!!,” she wrote. She included the hashtags #yesiampittingdates and #1acaibowlmaker, clearly proud of her humble beginnings. Her carousel of photos included what looked like an angsty teenage version of Bella, complete with spiky bracelets and dark hair. She also had red hair in one of the snaps as she posed with ginger root. It’s obvious she has come a long way since then!

It seems like her job was short-lived; she made her modeling debut during New York Fashion Week in 2014, according to Harper’s Bazaar. Although she’s walked for designers like Fendi, Moschino, and Marc Jacobs (via Insider), she seemed to be more interested in stepping behind the camera. “There wasn’t really one time in my life where I was like, ‘I want to be a model!’ It was more Gigi’s thing,” as she told Teen Vogue in October 2014. “I do like being in front of the camera more and more. Having experience behind it has taught me about lighting and angles, how to move, and what looks good and what doesn’t.”

Fans have some thoughts after seeing a glimpse of Bella’s past. Keep reading for more details. 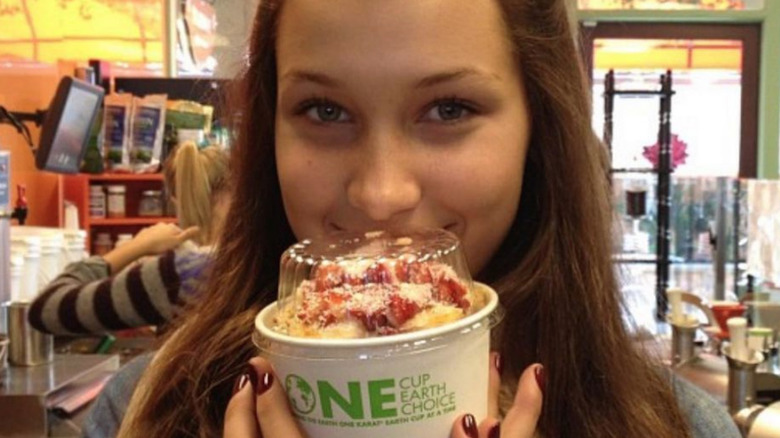 Before she ruled the runways, Bella Hadid earned her money like most teenagers and had a job. She was an acai bowl maker — and proud of it!

Bella shared a few photos on Instagram on August 31 and sent fans into a frenzy. Her sister Gigi wrote, “U made rlly good bowls ngl.” Another fan added, “So proud of u.” One fan wrote, “yessss ginger queen ilysm!!,” clearly enthusiastic about Bella’s first job before she became a household name.

It’s obvious Bella loves the attention, but she did her best to remain grounded despite her quick rise to fame. “I don’t walk down the street like, “I’m famous,” she told Glamour in August 2016. “It’s still weird to me when people ask for pictures. My close friends from high school keep me grounded — they don’t care about what I do. I’m still the same person I was, and I try hard not to change.” As for her work ethic, she owes everything to the acai shop. “I started working when I was about 14 at a juice place, making juices, acai bowls,” she added. “I cashiered. I cleaned dishes — and like 100 blenders — for hours.”

We’re sure those lessons from juicing serve her well on the runway!