EXCLUSIVE: Toni Collette’s husband and his glamorous chiropractor lover rush to get away after flaunting steamy romance on a popular Sydney beach – as couple take off in his 4WD with overnight bags

Toni Collette’s husband Dave Galafassi has been spotted jumping into a Toyota Prado with his new lover outside her beachside home, toting overnight bags – just days after they were pictured kissing passionately in the surf.

The Hollywood star and the one-time musician announced their divorce on Collette’s newly-reactivated Instagram account on Thursday.

It came hours after Daily Mail Australia contacted her management about the photos of Galafassi, 44, canoodling with bikini-clad chiropractor Shannon Egan, 41, at a beach in Manly.

Early on Friday morning, Galafassi – minus his wedding ring – could be seen packing his white 4WD outside the blonde beauty’s apartment.

She held a reusable paper shopping bag and a bulging black leather handbag. 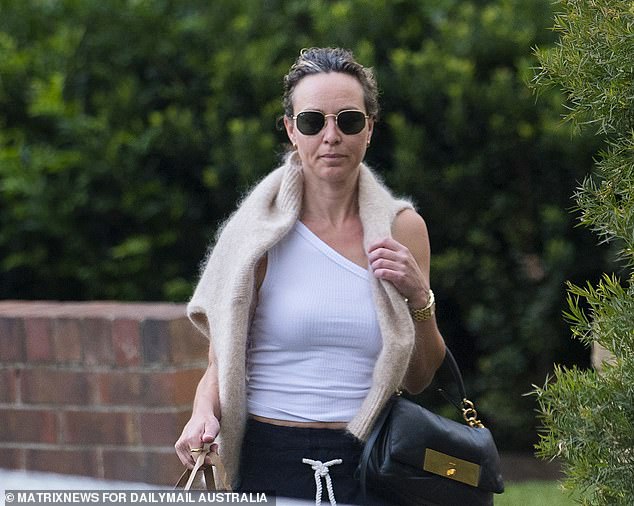 Shannon Egan, 41, is pictured jumping into a car with her new boyfriend, Toni Collette’s husband Dave Galafassi, on Friday morning 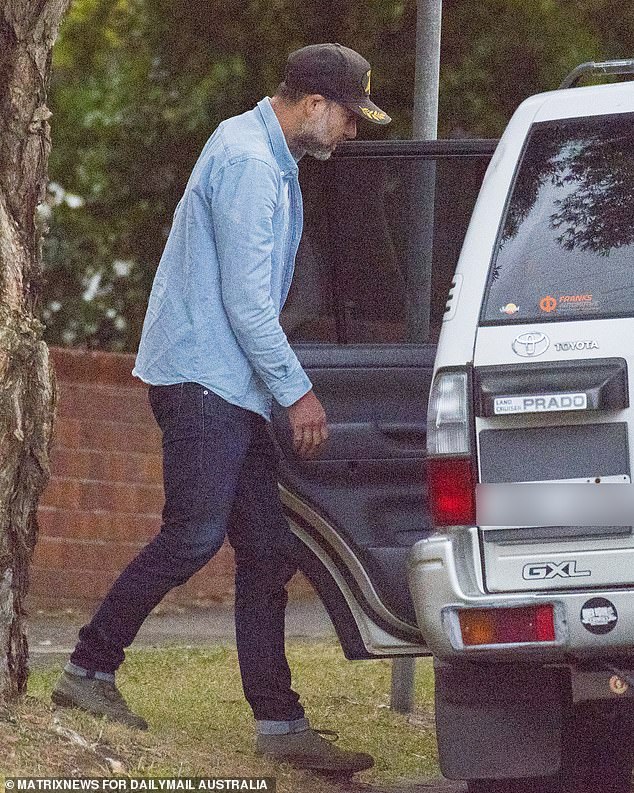 Dave Galafassi (pictured) picked Shannon Egan up from her home in Manly, before they took off towards Sydney city

She refused to comment on her new relationship when approached by Daily Mail Australia, before the lovers sped off towards Sydney’s city.

On Thursday, Galafassi told Daily Mail Australia he ‘doesn’t want to talk about’ his blonde lover, via the intercom at his Birchgrove home.

Their beachside rendezvous on Wednesday morning began at about 7.30am.

They spent about 15 minutes in the water, then bought a coffee. One witness said the couple was ‘all over each other’.

At one point they appeared deep in conversation as Galafassi rested on a sea wall and Ms Egan, wearing an open shirt and sunglasses, leant forward.

Hours after their steamy meetup, Ms Egan could be seen barefoot in T-shirt and striped shorts while taking her dog for a walk.

Ms Egan is an ‘integrative chiropractor’ with more than 15 years of clinical experience who has had her own serious health problems, according to an online profile. 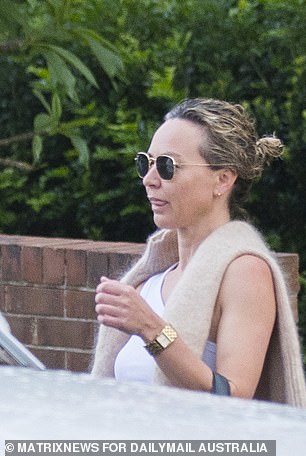 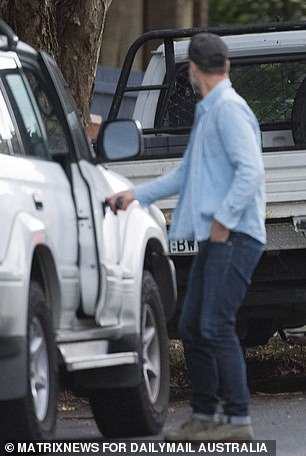 ‘Having a passion for healthy living, Shannon has extended her skills specifically in the areas of women’s health, mind-body connection and children’s health,’ the profile states.

‘Shannon has a special interest in empowering women to live a calm, connected and inspired life. Shannon also loves treating kids and enjoys seeing them reach their full potential; confident in their own body and be full of vitality.’

‘Through her own health challenges in recovering from a chronic illness, Shannon understands the complexities of health and the need for an integrative approach, both medically and holistically,’ her profile states.

‘The years during and after her illness and recovery gave her a deep understanding of what it means to face a life-threatening disease.

‘Consequently, she became fascinated by the emotional experience of illness. It fuelled a lifelong exploration into spiritual growth, meditation and the mind-body connection.’ 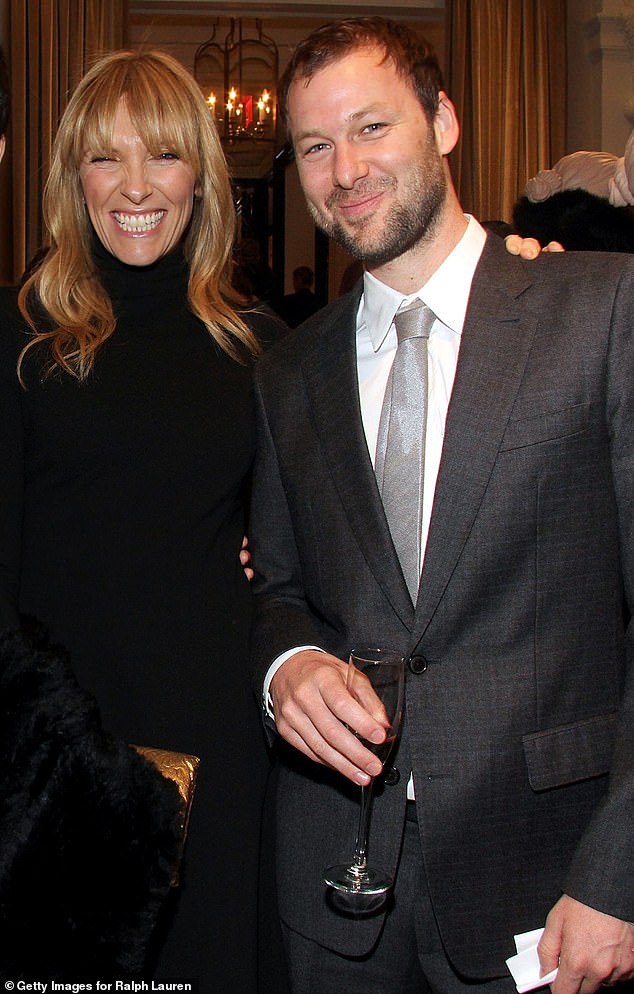 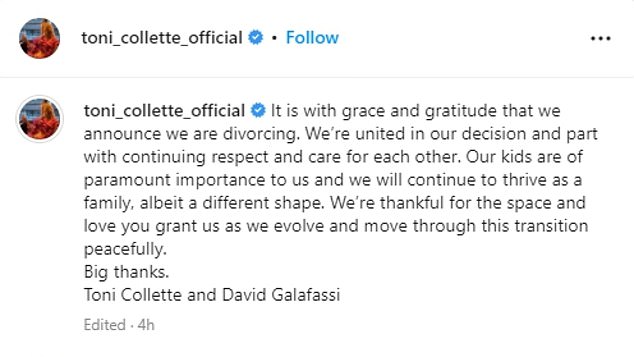 In a joint statement with Galafassi on Instagram on Thursday, Collette said: ‘It is with grace and gratitude that we announce we are divorcing.

‘We’re united in our decision and part with continuing respect and care for each other.

‘Our kids are of paramount importance to us and we will continue to thrive as a family, albeit a different shape. We’re thankful for the space and love you grant us as we evolve and move through this transition peacefully. Big thanks.’

The Hollywood star later added to the statement to clarify they had been separated for a ‘substantial period’ before they decided to divorce.

Collette, 50, and Galafassi have two children aged 14 and 11 and have divided their time between Australia and the United States in recent years.

The pair met in 2002 at the launch of Galafassi’s band Gelbison’s debut album Metal Detector in Sydney and their second encounter came just a few days later at a house party. 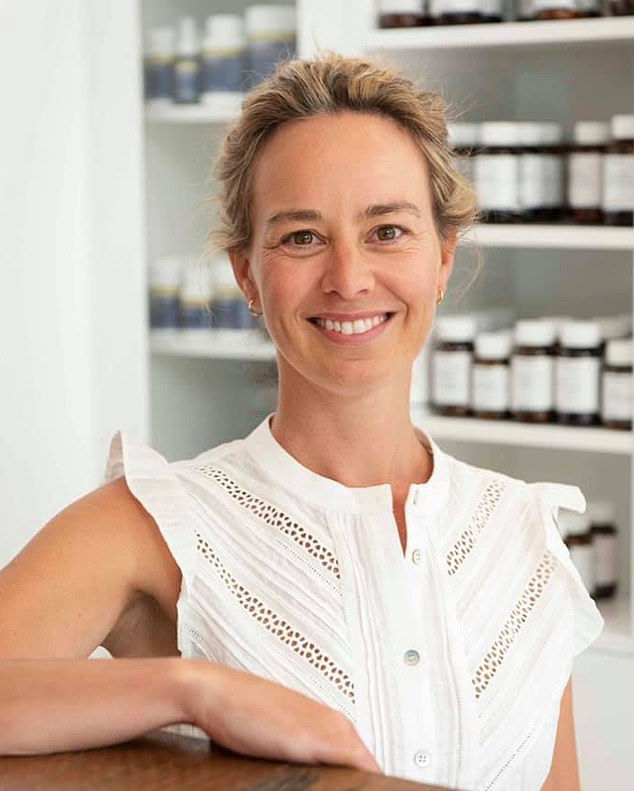 ‘Having a passion for healthy living, Shannon has extended her skills specifically in the areas of women’s health, mind-body connection and children’s health,’ Ms Egan’s online profile states

‘He was the first person I saw when I walked in the door,’ Collette told The Sydney Morning Herald in September 2018.

‘He kissed me on the cheek and I just kind of melted. I planned to stay for ten minutes… I was there for 12 hours. It was a good day.’

Collette is one of Australia’s most acclaimed actors, starring in The Sixth Sense, Little Miss Sunshine, The Hours, Knives Out and the television series United States of Tara.

She was nominated for an Oscar for The Sixth Sense and won an Emmy for United States of Tara, for which she also picked up a Golden Globe.

Galafassi and Collette were married with Buddhist rituals on her property at Berry on the NSW south coast less than a year after they met, in January 2003.

The ceremony was followed by a weekend of partying which featured dancing monks, fireworks and a vegetarian banquet for 100 guests.

Sydney-born Collette, who is also a singer and songwriter, subsequently formed a band with Galafassi, who comes from the NSW mid north coast town of Port Macquarie.