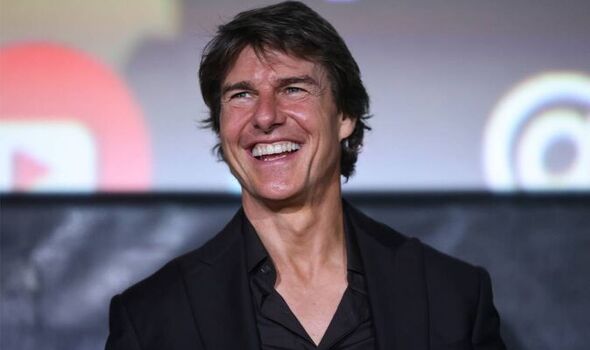 Playing daredevil aviator Captain Peter “Maverick” Mitchell, he is still feeding his “need for speed”, training a new generation of hotshot fliers in the £138million sequel Top Gun: Maverick. Barely two months shy of his 60th birthday, Cruise remains youthful and athletic, his million-watt smile as dazzling as ever.

He is still fit enough to perform his own bruising stunts, whether piloting a fighter jet, leaping across rooftops or clinging to the outside of a plane on take-off, as he has in recent outings in his blockbuster Mission: Impossible franchise.

In his latest airborne adventure fans will see his trademark chiselled jaw bent out of shape by 1,600lbs of genuine force as he pulls 8Gs in a jet.

“You can’t act that, the distortion in the face,” he says.

Cruise may break the sound barrier in Top Gun: Maverick, but there’s a more remarkable barrier that he shatters in the film: the age gap with his leading lady. Jennifer Connelly is his first romantic co-star over the age of 50.

Whether it’s a rare dash of realism, or a belated nod to feminism, it’s a momentous change for Cruise, who has been notorious for casting leading ladies whose ages hover in their thirties, even as he grows progressively older in every film.

Connelly, 51, who won the best supporting actress Oscar in 2001 for A Beautiful Mind, is only eight years younger than Cruise: a slender age gap that he could leap over without pulling a muscle.

It’s a paradigm shift after Cruise has spent a career romancing women on screen often young enough to be his daughter.

Cruise was 54 when he cast Sarah Wright, 22 years his junior, as his romantic interest in 2017 movie American Made. Emily Blunt was 30 when starring opposite a 51-year-old Cruise in 2014 sci-fi thriller Edge Of Tomorrow, finding love as they teamed up to kill invading aliens.

The 2013 action-adventure Oblivion saw Cruise 17 years older than female lead Olga Kurylenko, who appeared with Daniel Craig’s Bond in Quantum Of Solace. And Rosamund Pike was 33 when she co-starred with the 49-year-old Cruise in 2012 adventure Jack Reacher.

At the age of 54 Cruise starred in 2017 hit The Mummy opposite love interests Annabelle Wallis, aged 32, and Sofia Boutella, aged 35, who were 22 and 19 years younger respectively.

“I never really think in terms of age,” claimed The Mummy director Alex Kurtzman, disingenuously. “I always think what feels right in the part and who walks in the door.”

Yet Cruise always has the final say over who is cast as his love interest. Invariably it has been a young, nubile actress staring across the chasm of a huge age gap.

Seeing a middle-aged man melting the heart of a young woman in her prime doubtless appeals to the male moviegoing demographic who buy tickets to Cruise’s action thrillers, but critics have questioned whether female audiences might share that sentiment.

Feminists ask why Cruise no longer casts himself opposite one of the many talented and still-beautiful actresses closer to his own age, such as Sharon Stone, Demi Moore, Renée Zellweger, Laura Linney, Julianne Moore or Michelle Yeoh.

They argue that Hollywood perpetuates the myth women are only sexually attractive in their mid 20s to early 30s, whereas men remain sexually desirable at any age.

“Men on screen have a whole life, and women only have a shelf life,” says Nicky Clark, founder of Acting Your Age, campaigning for age-appropriate casting in movies.

Cruise is hardly alone in promoting the conceit that men are irresistible to women half their age. Sean Connery was 68 when romancing 29-year-old Catherine Zeta-Jones in Entrapment; Jack Nicholson was aged 60 opposite 34-year-old Helen Hunt in As Good As It Gets; and Woody Allen 65 when he cast 26-year-old Charlize Theron as his love interest in 2001’s The Curse Of The Jade Scorpion.

But Cruise has been a serial offender, locking lips with women who were barely out of nursery at the time he was dancing in his Y-fronts in 1983’s Risky Business.

He even took the on-screen age gap into his real life, making actress Katie Holmes his second wife in 2006 despite a 16-year age difference.

What is more remarkable about Jennifer Connelly’s casting in Top Gun: Maverick is that at the age of 51 she’s still older than most of his past leading ladies are now.

Cameron Diaz, who co-starred with Cruise in 2010 action-adventure Knight And Day, is still only 49. She was 37 when she appeared opposite Cruise, ten years her senior. His Mission: Impossible II romantic lead

Thandiwe Newton is also only 49, but was 27 when she appeared in the 2000 thriller opposite a 37-year-old Cruise. Penelope Cruz, 48, was 12 years his junior when she co-starred with Cruise in 2001’s Vanilla Sky.

He was even set to star in Guy Ritchie’s remake of Sixties spy action-comedy The Man From U.N.C.L.E. in 2015 at the age of 52, opposite romantic interest Alicia Vikander, half his age at 26. He only escaped his most egregious age gap ever by dropping out to make a fifth Mission: Impossible film instead.

Cruise has made more than 40 movies, yet there are only three in which his character was romantically linked to an older actress – all early in his career: Losin’ It, Born On The Fourth Of July, and Top Gun, in which Kelly McGillis was five years his senior, though a still fresh-faced 28 at the time.

But since 2000 when he turned 38, there has only been one film where Cruise’s love interest age gap dipped below double figures, when his wife was played by Kathryn Morris, only six years his junior, in 2002’s Minority Report.

The problem is not of Cruise’s making, of course, but is endemic to Hollywood, where wealthy ageing producers drape themselves with decades-younger trophy wives, and actresses are routinely sexually objectified on screen.

Aaron Sorkin, who penned the script for courtroom drama A Few Good Men, recalled: “There was an executive who gave me a note, ‘If Tom Cruise and Demi Moore aren’t going to sleep with each other, why is Demi Moore a woman?’

“I said the obvious answer: Women have purposes other than to sleep with Tom Cruise.”

It’s a view that few Hollywood executives share. As Cruise’s romantic interest in Top Gun: Maverick, Jennifer Connelly could be blazing a trail for actresses of a certain age in Hollywood, though it’s worth noting that the former model could pass for more than a decade younger than her half century.

Cruise’s original Top Gun co-star Kelly McGillis was not even approached to reprise her role in the sequel, which opens in the UK later this month.

“I’m old and I’m fat and I look age-appropriate for what my age is,” says McGillis, 64, “and that is not what that whole scene is about.”

“I was impressed by his exuberance and his generosity,” she says. “I’m his biggest fan.”

And that’s 51 years of experience talking.