When hitting back at online haters criticizing her appearance, 15-year-old Alabama Luella Barker suggests the critics to ‘keep [their] opinion to [themselves].’

AceShowbiz –Travis Barker‘s daughter is not letting negative comments about her appearance slide. Finding herself being told looking “too grown” by some online critics, Alabama Luella Barker set aside time to fire back at the “miserable” trolls.

The 15-year-old offered her clapback via Instagram Story on Friday, May 21. “At this point, I have grown men and mothers hating on me, messaging me awful things. I do not care whether you think I look too grown for my age. Keep your opinion to yourselves. It’s miserable that you guys can sit there and DM [direct message] me instead of watching your own children,” she first argued.

Alabama went on to defend the Blink-182 drummer. “My father is one of the most incredible da’s there is out there,” she said, before stressing, “You guys do not know my inside life keep your opinions to yourself.” 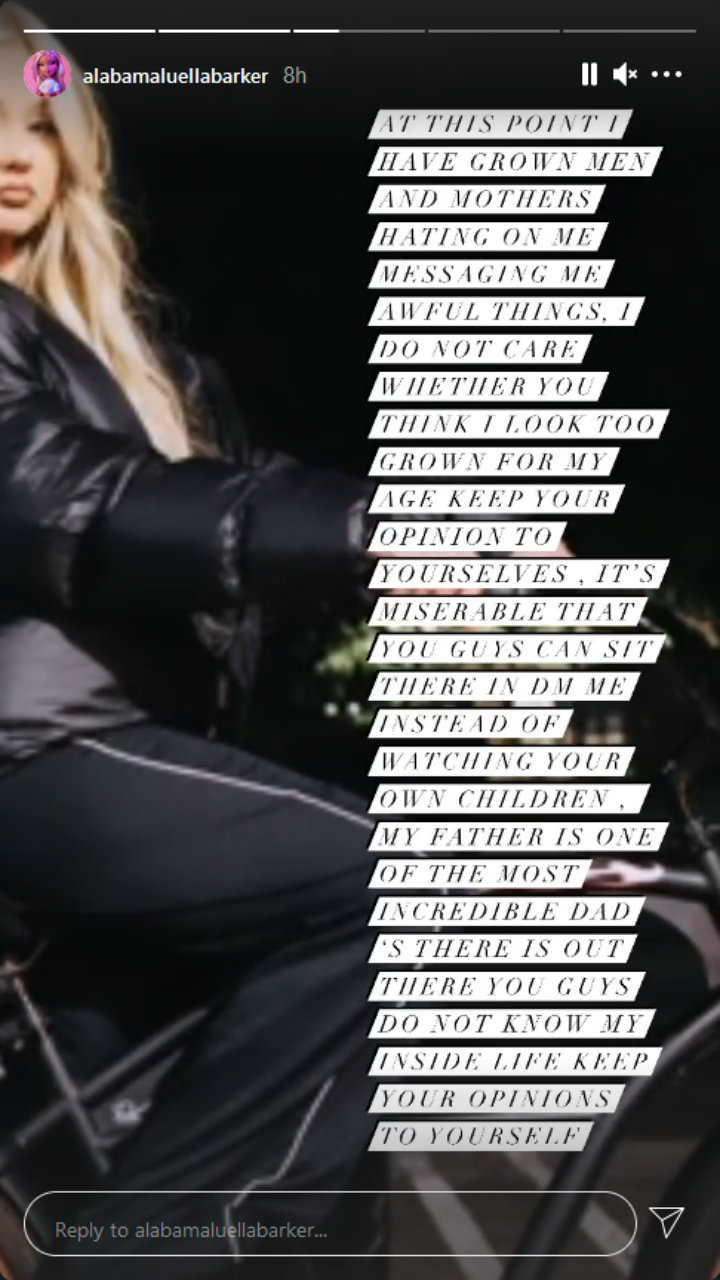 Alabama Luella Barker fired back at trolls criticizing her look.

Alabama’s post came after she accused her mom Shanna Moakler of being an absent mother on May 15. “Everybody thinks my mother is amazing,” she penned on Instagram Story, before dissing Shanna’s boyfriend, “[Matthew Rondeau] is nothing but awful to her. Not only that, but he cheats on her. My mom has never completely been in my life.”

The teen then urged her fans, “Can you guys stop painting her out to be an amazing mom?” She further divulged, “Did your moms ask to see you on Mother’s Day [because] mine didn’t? I’m done keeping it a secret, reality shows.”

Alabama’s older brother, Landon, previously spilled on TikTok that Shanna was not “in [their] lives like” Travis. Upon hearing her kids’ allegations, the Miss New York USA winner said she was “hurt” by their claims.

“I’m not really sure why my kids put that out there,” she told Us Weekly. “I’m their mother. I love them. It’s hurtful and heartbreaking to have your kids say that when … clearly that’s false. It’s a false claim.”