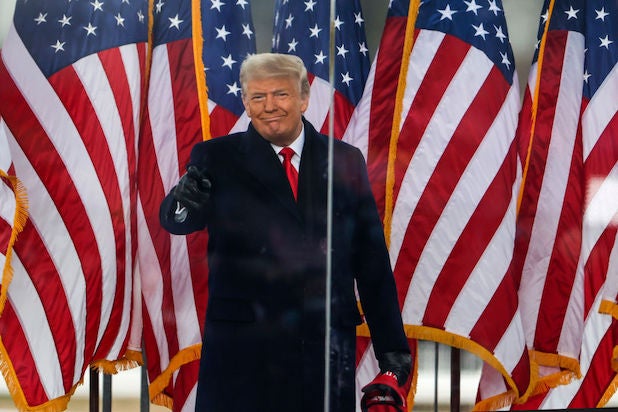 Trump speaks at a rally before the Jan. 6 attack on the U.S. Capitol. (Photo by Tasos Katopodis/Getty Images)

Donald Trump’s defense team quickly concluded their argument on Friday afternoon, bringing the former president’s impeachment trial in the Senate close to an end. But in their two-and-a-half-hour presentation, Trump’s attorneys lobbed a number of questionable arguments in defense of Trump — some of which were demonstrably false.

Here are their four most confounding arguments:

1. Trump’s rally speech telling his followers to “fight like hell” and head to the Capitol was “political rhetoric”

Trump’s attorneys argued that the former president’s rally speech ahead of the Jan. 6 attack — where he encouraged his followers to go to the Capitol and “fight like hell” — was simply “political rhetoric.”

“He meant the crowd should demand action from members of Congress and support primary challenges,” attorney David Schoen said.

Trump’s defense team sought to demonstrate that Democratic lawmakers have also used words like “fight” before in their political rallies and speeches. But it should be noted that none of those speeches have been directly followed by an insurrection.

2. “All political speech must be protected” under the First Amendment

Van der Veen argued that “all political speech must be protected” under the First Amendment. But there are limits to what kinds of speech the First Amendment protects. Included in those limitations, under Brandenberg v. Ohio, is speech “directed to inciting or producing imminent lawless action” and is “likely to incite or produce such action.”

“Asking whether President Trump was engaged in lawful First Amendment activity misses the point entirely,” the letter said. “Regardless of whether President Trump’s conduct on and around January 6 was lawful, he may be constitutionally convicted in an impeachment trial if the Senate determines that his behavior was a sufficiently egregious violation of his oath of office to constitute a ‘high crime or misdemeanor’ under the Constitution.”

3. The U.S. Capitol attack was pre-planned so Trump could not have incited the insurrection

Van der Veen said that Trump could not hvae incited the insurrection because “extremists of various different stripes and political persuasions” had pre-planned the attack.

“You can’t incite what was already going to happen,” Van der Veen said.

4. Antifa was involved in the attack

Van der Veen, in making his argument that “extremists” pre-planned the attack, also said Antifa was involved in the insurrection.

FBI officials, however, have said there is “no indication” that Antifa members disguised themselves to participate in the Capitol attack. Plus, numerous rioters have been identified as conspiracy theorists and members of right-wing extremist groups such as the Proud Boys.

The attorney also said, without evidence, that one of the first rioters arrested in the Jan. 6 attack was a member of Antifa.