Products featured are independently selected by our editorial team and we may earn a commission from purchases made from our links; the retailer may also receive certain auditable data for accounting purposes.

It’s the big fight MMA fans have been waiting for, as Kamaru Usman faces off against Jorge Masvidal at UFC 261 this weekend, in a highly-anticipated rematch that promises to go the distance.

Usman vs. Masvidal 2 airs live this Saturday on ESPN+ and marks the second time the two fighters will meet in less than a year. Usman successfully defended his UFC Welterweight title via unanimous decision over Masvidal at UFC 251 last July. But Masvidal had shown up to the fight as a last-minute replacement for Gilbert Burns. With more training time under his belt — and a previous crack at the champ — Masvidal is expected to be better prepared for the rematch.

When is UFC 261? See Date and Location

UFC 261 takes place this Saturday, April 24 live from VyStar Veterans Memorial Arena in Jacksonville, Florida. The event makes the first time UFC will have a live in-person audience in attendance since the coronavirus pandemic hit last March. Tickets to UFC 261 are almost sold out, and the arena is expected to fill its full capacity of 15,000 seats.

Covid protocols will be in place to ensure the safety of the fighters and the fans. If you want to watch UFC 261 live in person, you can see the latest ticket prices and get tickets to UFC 261 on Vivid Seats.

How to Stream UFC 261 Live Online

This is an official pay-per-view event, so to watch the Usman vs. Masvidal fight, you’ll need to sign up for an ESPN+ subscription here, and then pay a $69.99 PPV price. The total cost will be $75. You’ll have access to ESPN+ for the fight, and 30 days afterwards, for free streaming of UFC Fight Night, live sports and access to all ESPN+ content. If you want to watch future UFC PPV events though, you’ll have to sign-up for ESPN+ again.

Your best bet is to sign up for an annual ESPN+ subscription and UFC 261 at once. The total price will be $89.98, which saves you 35% over paying for the annual subscription and fight separately. Your annual ESPN+ membership keeps you in the service for a year, so you don’t have to worry about downloading ESPN+ or signing up for the service again for any future UFC PPV events.

Another option: get the UFC + Disney Bundle deal, which gets you instant access to the fight plus ESPN+, Disney+ and Hulu for just $84 here. Once the fight ends, you’ll still have unlimited access to all three streaming services for the rest of the month. You can continue with your Disney Bundle plan for just $13.99 a month moving forward.

There isn’t a way to stream UFC 261 online free, though ESPN+ subscribers can watch the UFC 261 prelims for free, along with free post-fight coverage. You’ll still have to sign-up for the pay-per-view fight here if you want to watch the main card. See full UFC 261 pricing and streaming details on plus.epsn.com. 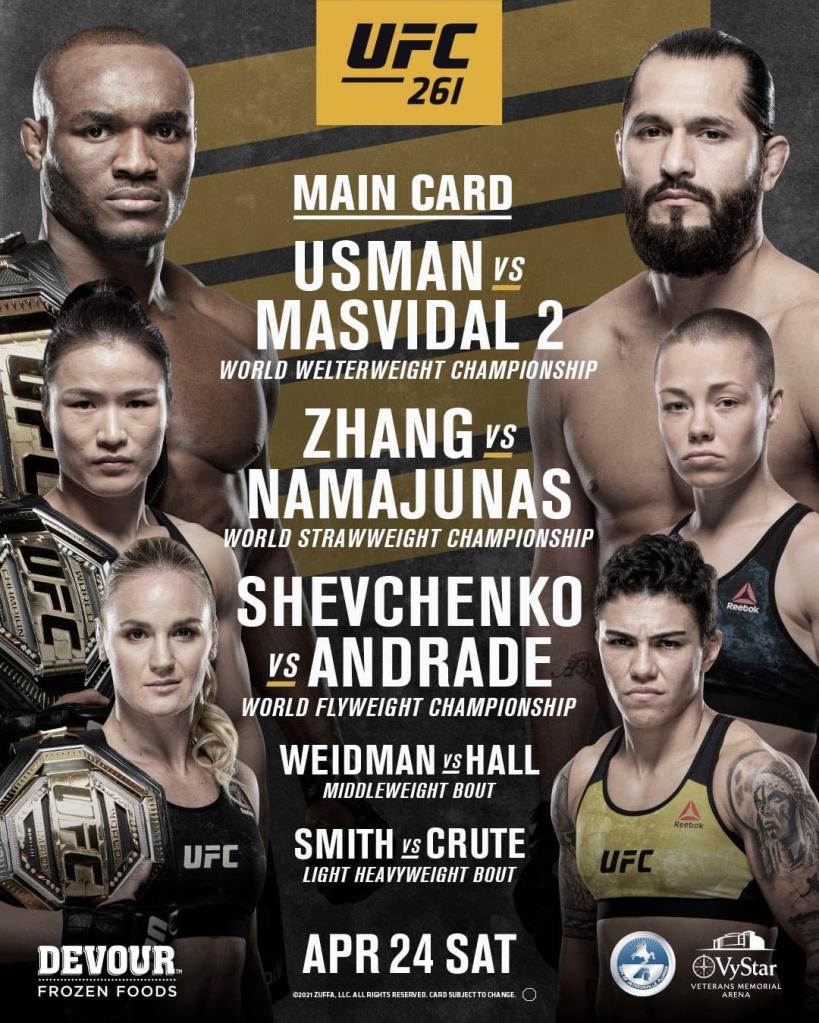 A UFC Welterweight Championship rematch between current champion Kamaru Usman and Jorge Masvidal is the headline fight of UFC 261. Usman a.k.a. the “Nigerian Nightmare” is the current favorite to win, according to oddsmakers. But Masvidal is quickly moving up the ranks, as the current number four challenger in the welterweight division, and he could prove to be a surprise as he takes on Usman for the second time.

The rest of the card is stacked with huge matches as well, including a UFC Women’s Strawweight Championship bout between the current champion, Chinese star Zhang Weili, and former champion Rose Namajunas. The match is billed as a co-main event and bookies seem to be split on who the favorite is; while Weili is known for her brute force and power, Namajunas may hold the edge on agility and ground game.

The rest of the main card features a middleweight rematch between former UFC Middleweight champ Chris Weidman and Uriah Hall, and Jimmy Crute vs. Anthony Smith in a Light Heavyweight bout.

Where to Buy UFC 261 Merch Online

If you want to rep your favorite fighter, the official UFC store has a huge sale right now on a selection of T-shirts, hats, beanies, memorabilia and more, including official UFC 261 merch featuring Usman vs. Masvidal. Whether you’re a collector or fan, it’s a great way to commemorate what’s sure to be a memorable night of action in the octagon. See all the available UFC 261 merch online here.