“Tiger King” star Joe Exotic stunned the world when he announced in May that he was suffering from prostate cancer. On Twitter, Exotic told followers that his lawyer John Phillips had medical records from his Fort Worth, Texas prison to prove this and that “the prison has approved testing to verify what stage it is in.” The former zoo owner wrote in his tweet series that despite his apparent symptoms that “I have lost a tremendous amount of weight, the mouth sores are out of control, I throw up more than I eat,” he was not seeking public sympathy but rather, his goal this whole time — getting out of the prison. “I need the world to help [Phillips] get President Biden, VP Harris and the Attorney General to … sign that pardon that Trump left behind so I can go home and get proper medical care and proper food.”

Exotic, who is serving a 22-year sentence for violating wildlife laws and a 2017 murder-for-hire plot to kill Carole Baskin, was not diagnosed yet with prostate cancer, Phillips clarified at the time to the New York Post. “Joe … is still awaiting a biopsy. It is premature to say he has prostate cancer even if his doctors are saying he has all the signs,” Phillips shared.

Now, Exotic has returned with an update in early August on his condition whilst in prison. Keep reading for the current state of the docuseries sensation’s health.

Joe Exotic's cancer has allegedly spread, but there's no concrete proof yet 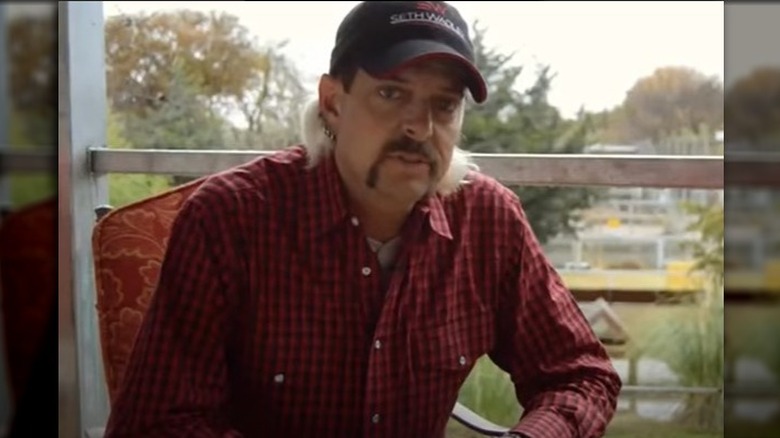 Joe Exotic has told The Sun that since his May announcement of having prostate cancer, he has not received any treatment in his Fort Worth, Texas prison — and now, prison medics “are concerned it is in my stomach and pelvis.” The “Tiger King” star claimed he was even subjected to a CT scan the week prior. “I puke when I pee — the pain is that bad. I’m losing weight all the time… I limp to walk. And my stomach has hurt for over a year,” he said, describing his symptoms.

Bear in mind, this is still all before Exotic has received an actual biopsy and diagnosis, which he told the Sun is one of “many tests” he wishes to receive at a specialist center, with the others including the “colonoscopy and endoscopy” he says he has awaited since October 2020. “When we find out where and how bad it is I will decide if I am going to do treatment.”

Maintaining his innocence after failing to be pardoned by Donald Trump in January (per CBS News), Exotic spoke defiantly against the prison medical system, calling it “worse than at any humane society for dogs.” “If it’s stage three or four, I am going to let it take me,” Exotic shockingly added. Is there, perhaps, a possibility all of this is orchestrated so Exotic can leave prison? As with many slippery truths, only time will tell.