What a terrifying and tragic Thanksgiving.

Two young Atlanta residents were murdered on November 22 after letting a man into their apartment.

According to the Atlanta Police Department, a man was seen lingering outside an apartment building in the Sweet Auburn neighborhood for some time before eventually being buzzed in. 31-year-old Daniel Aaron and 30-year-old Kristen McDevitt let the man into their apartment — though it’s not clear why — where police say he stabbed the young couple to death.

Most of what they know about the crime comes from security footage in the building. For instance, police were able to see the man — who was wearing a mask and baseball cap — being let into the apartment. Then, after about 90 minutes, he emerged, hurriedly carrying a safe out of the building.

He can be seen just moments later in footage from outside the building pushing the safe over a tall fence before pulling himself up and over. 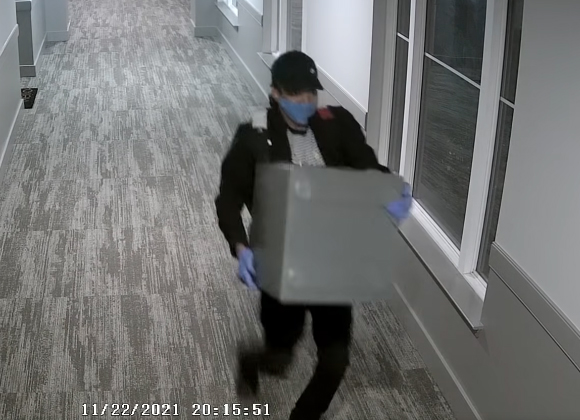 While not much can be seen to identify the man in the footage, it isn’t completely useless. Police have noticed a couple particular factors: first, they believe the suspect may have a nose ring. Second, they noticed he has a very particular walk — and not just when he’s lugging around a safe. Atlanta Police Homicide Commander Lt. Ralph Woolfolk explained:

“We want individuals to pay attention to the way that this individual walks. We think that he has a very peculiar walk, it’s very distinct.”

Check out the footage for yourself (below):

A GoFundMe has been set up since the couple’s murder to help pay for a memorial for the families. Friend Matthew Arnold calls Daniel and Kristen “two of the most caring, loving, beautiful people in our amazing family”:

“Kristen and Dan were a staple in this community and knew how to spread inclusiveness, compassion, and love. Their time with us shined with effervescent brightness. Their love was beautiful, brightening and too brief. We need to commemorate them in a proper way dressed up lively and to the nines. They lived and loved in a full spectrum, and we want to celebrate the legacy they have left us…”

You can donate HERE.

What an awful story. Not that it’s their fault for what happened to them, but we just can’t figure out why they would let a stranger in. Was he not a stranger? Was this more personal than a robbery? We guess we’ll have to wait until the suspect is found for more answers.

Atlanta Police ask anyone with information about the murders to contact Crime Stoppers HERE. Tips can also be called in to (404) 577-8477. A reward is being offered for any information that leads to an arrest.