With in-person performances not yet quite widespread, here are 10 highlights from the flood of online music content coming in May. (Times listed are Eastern.)

The invaluable New York concert series Music Before 1800 is back with a series of streams, including this period-instrument group’s program of music written for the court of Catherine the Great. One of the pieces may well be familiar: Haydn’s Quartet in E flat, “the Joke.” The other will be a rarity, by Anton Ferdinand Titz. (The harpsichordist Aya Hamada’s recital follows on May 23.) ZACHARY WOOLFE

May 6 at 8 p.m.; roulette.org; available indefinitely.

Roulette, in Brooklyn, one of the best places to hear music in New York, is allowing limited audiences into its space for performances this spring. But those shows will still be livestreamed, too. No matter how you attend, any gig featuring Karl Larson, known as the pianist of the trio Bearthoven, is worth it. Here, he celebrates “Dark Days,” his new solo recording of music by Scott Wollschleger. Wollschleger’s generally soft dynamics may lull you into thinking he’s primarily meditative, but part of the fun involves staying alert for the alterations of attack and twists of mood that Larson highlights. SETH COLTER WALLS

This program, led by Yannick Nézet-Séguin and featuring the bass-baritone Davóne Tines, opens with a triptych. First is the propulsive “Shake the Heavens,” from John Adams’s “El Niño,” followed by “Vigil,” a subdued and affecting song in memory of Breonna Taylor, by Igee Dieudonné and Tines. (You can stream that now, from Lincoln Center at Home.) Then Tines gives a preview of Anthony Davis’s “X: The Life and Times of Malcolm X,” which he will star in at Michigan Opera Theater next year. The second half of the concert features Mozart’s Symphony No. 25 in G minor, which fans of “Amadeus” will recognize immediately. JOSHUA BARONE 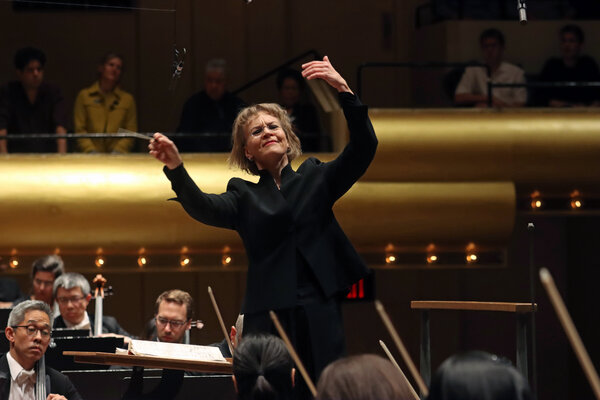 Schubert’s “Der Hirt auf dem Felsen” (“The Shepherd on the Rock”), thought to be the last of his 600 songs, is an extraordinary piece for soprano, clarinet and piano. Susanna Phillips, a frequent presence at the Metropolitan Opera, will sing it in a recital livestreamed by the 92nd Street Y, joined by the clarinetist Anthony McGill and the pianist Myra Huang. The program also includes a premiere by James Lee III — a setting of a poem by Lou Ella Hickman written for this trio combination — a work by William Grant Still and Schubert’s popular “Arpeggione” Sonata, here adapted for clarinet and piano. ANTHONY TOMMASINI

May 13 at 8 p.m. through May 14 at midnight; issueprojectroom.org; available indefinitely.

For the 90th birthday of this experimental-music icon, over seven dozen colleagues will join him for 28 hours of performances of “I Am Sitting in a Room,” his signature work, from 1969. The piece consists of a few sentences that are recorded as they’re spoken; the recording is then played and rerecorded, and the process continues as the clashing frequencies of the different recordings begin to dominate and the words become unintelligible. After a year of isolation, what could be a more poignant artistic celebration? ZACHARY WOOLFE

May 14 at 2 p.m.; concertgebouworkest.nl; available through May 21.

The coronavirus pandemic has upended the orchestral world, including separating ensembles from their music directors, sometimes by thousands of miles. This has provided an opportunity for conductors closer to home to fill in, sometimes even multiple times. It’s a slightly different situation with this superb Amsterdam orchestra, which has been searching for a new podium leader for the past few years — but the opportunity is still there. After making his debut in September, Klaus Makela, a 25-year-old Finn recently appointed music director of the Orchestre de Paris, returned to the Concertgebouw in December and will now be back yet again, an almost unthinkable frequency in normal times. His program includes Messiaen’s “Les Offrandes Oubliées” and Shostakovich’s Symphony No. 10, with its grandly brooding opening. ZACHARY WOOLFE

May 21 at 8 p.m.; washingtonperformingarts.org; available through May 27.

When three star performers come together, it is often the occasion for canonical standards. This violin-cello-piano recital, though, goes a more idiosyncratic route, attempting to evoke Jewish life in Eastern Europe before the world wars. Works by Solomon Rosowsky and Ernest Bloch conjure that scene, as will Kissin’s recitation of Yiddish poetry. Then the cataclysm of the Holocaust will be represented by Shostakovich’s Piano Trio No. 2, written in 1944. ZACHARY WOOLFE

Britten’s chamber opera “Albert Herring” is like a wistfully comic alternative to his “Peter Grimes”; it’s the story of an awkward, shy, innocent boy who doesn’t fit in with the expectations of the people in his small market town in England, but goes on to be improbably crowned the town’s May King. This Minnesota Opera production, directed by Doug Scholz-Carlson, features the tenor David Portillo as Albert, with the insightful conductor Jane Glover leading Britten’s subtly complex, whimsical score. ANTHONY TOMMASINI

May 22 at 1 p.m.; digitalconcerthall.com; available indefinitely.

What will come of the premieres that were canceled during the pandemic? Thankfully, two by the composer Kaija Saariaho are happening sooner rather than later. The Aix Festival in France is planning to present her new opera “Innocence” in July, conducted by Susanna Malkki. And the Berlin Philharmonic is livestreaming the belated premiere of Saariaho’s 25-minute “Vista” — also led by Malkki, to whom the piece is dedicated. Filling out the program is “Bluebeard’s Castle,” the chilling Bartok one-act, of which Malkki recently released a wonderfully textured recording with the Helsinki Philharmonic Orchestra. JOSHUA BARONE

May 25 at 7 p.m.; kaufmanmusiccenter.org; available through June 1.

This cellist burst onto the scene with a 2016 recording that featured his stellar acoustic playing, often in works that also incorporated electronics. He’ll play one of those pieces — Pierre Alexandre Tremblay’s “asinglewordisnotenough3 (invariant)” — in this virtual concert for the Ecstatic Music series. The rest of the program, including a composition by Nathalie Joachim, emerges from Woods’s solo show, “Difficult Grace,” inspired in part by the Great Migration. SETH COLTER WALLS