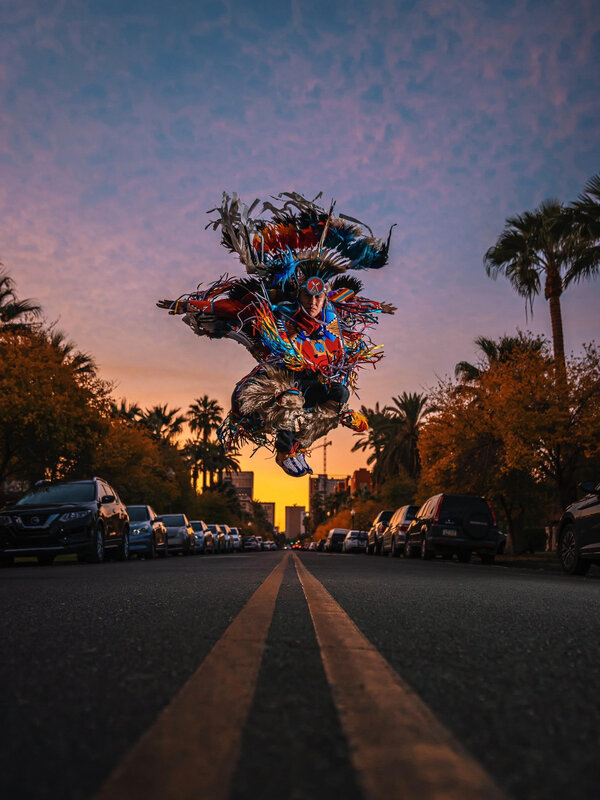 Since September, the Joyce Theater has been offering a free virtual fall season that is as good as some of its best in-person ones. The secret has been surprise and an avoidance of the usual suspects. If that is a little less true of the latest batch of videos — available through Sunday at joyce.org/joycestream — the variety still provides plenty of spice.

Vanessa Sanchez and the group La Mezcla, from San Francisco, mix modern tap and zapateado to celebrate the women of the Zoot Suit Riots of the 1940s. And Rennie Harris Puremovement shows once again how hip-hop can convey both can’t-take-your-eyes-off-it flash and hard-to-watch grief.
BRIAN SEIBERT

A room can be a refuge, but without an easy exit, it can also feel like a jail. For the Frenchman Xavier de Maistre, it was both: While under house arrest in 1790, he wrote “Voyage Around My Room,” a tribute to the creativity his imprisonment unleashed.

The production, which livestreams on Zoom Fridays to Sundays through Jan. 10, includes audience participation and a post-show discussion. Children can also follow the journey, though less interactively, in an on-demand video Jan. 11-Feb. 11. Tickets to gain access to these performances are pay-what-you-wish and available at newohiotheatre.org.
LAUREL GRAEBER

Time to Ponder Time Itself

When the Frick Collection introduced its virtual series, “Cocktails With a Curator,” its deputy director and Peter Jay Sharp chief curator, Xavier F. Salomon, described the program as a way to show how the museum’s pieces are “relevant to issues we’re facing today.” That’s especially true for the artwork featured in the next episode: “The Dance of Time: Three Nymphs Supporting a Clock,” by the 18th-century sculptor Clodion with the clockmaker Jean-Baptiste Lepaute. Looking back on 2020, the passage of time has never felt so complicated.

There’s also nothing simple about “The Dance of Time.” The three terra-cotta nymphs holding up a globe-encased clock are either witnessing the passage of time or represent it themselves. To find out more, make a metropolitan (or the mocktail alternative, a ginger ale hot toddy; both recipes are on the Frick’s website), and tune in to the museum’s YouTube channel on Friday at 5 p.m. Eastern time to hear Salomon discuss the timelessness of this unique timepiece.
MELISSA SMITH

SummerStage Is Just a Screen Away

While its recently renovated stage in Central Park sat idle this past season, SummerStage — the nonprofit organization that typically floods the five boroughs with live outdoor music — sprouted roots in virtual space. Its season of free online programming, SummerStage Anywhere, is now complete, but is archived on their YouTube channel for latecomers to enjoy.

Offerings are wide-ranging, crossing disciplines, genres and generations. Soccer Mommy, an indie-rock darling, performed her first and, so far, only full-band show in support of her latest album, “Color Theory.” ASAP Ferg joined Fab 5 Freddy, one of hip-hop’s elder statesmen, for a conversation about creativity in the face of racial injustice. Gloria Gaynor and her band revisited hits from her disco heyday (including, of course, “I Will Survive,” a song that has special resonance these days). For those of us yearning for a time when we can once again spread our blankets and take in the sounds at Rumsey Playfield, this series provides a nice stopgap.
OLIVIA HORN

Previously, listeners curious about “Density 2036” — the ambitious, 23-year commissioning project that the flutist Claire Chase started in 2013 — have needed to stake out her concerts. (While Chase recorded her interpretations of a couple of the earliest works at the beginning of the project, studio renditions seemed to have taken a back seat to live dates in recent years.)

Now four new full-length CDs, released by Corbett vs. Dempsey Records, allow a global audience to catch up with the first half-decade of Chase’s initiative. (They’re also available digitally on Bandcamp.) Highlights abound in each set, thanks to a range of composers that includes Marcos Balter, George Lewis and Pauline Oliveros. And one particularly striking stretch on “Part IV” features a version of Tyshawn Sorey’s “Bertha’s Lair” (with the composer heard on percussion alongside Chase). That fancifully vigorous piece is directly followed by a distinct yet similarly percussive work: “Five Empty Chambers” by Vijay Iyer.
SETH COLTER WALLS