SAN FRANCISCO — Confined by the pandemic to her three-story Victorian home, Lauren Gunderson did not have to go far to find inspiration for her latest play. He was one room away, in the home office next to hers on the top floor.

Over Rombauer chardonnay (for her) and a vodka tonic (for him) she set her phone down, opened the voice recording app and interviewed Nathan Wolfe, her husband of eight years. The transcripts of those conversations are the basis of “The Catastrophist,” her new solo play that was filmed on a stage near San Francisco in December and will premiere as “cinematic theater” later this month.

With the exception of Shakespeare, Gunderson has been the most produced playwright in the United States in recent years, according to a tally by American Theater magazine.Wolfe has his own claims to stardom, albeit of the more academic variety. He is an expert on plagues who warned presciently about the risks of a big pandemic years before the word became such an everyday, and despised, piece of vocabulary. (“This is Nathan Wolfe,” read the cover headline on the summer issue of Wired magazine. “We should have listened to him.”)

The founder of a company that models the risk of epidemics, Wolfe speaks with a measured cadence, as if an algorithm had carefully selected the words. Asked how he plans his own activities, his answer would not be out of place in a World Health Organization news release: “We are not going to take any risks that are unnecessary because it’s not socially responsible and it’s not individually responsible.”

Gunderson is colloquial and effervescent, speaking in metaphors that could be slotted into her next play. She tends to interrupt her husband to add some color to his gray sentences. “We all feel afloat, adrift. Where is the land? What do we stand on?” she said, summarizing our collective psychological response to the pandemic.

Gunderson’s long list of works includes many that spotlight the lives of scientists, some well known, some obscure. This piece — which was commissioned by the Round House Theater in Bethesda, Md., and the Marin Theater Company in Mill Valley, Calif., where Gunderson is playwright in residence — is of course more intimate.

That’s not to say she didn’t go in well aware of the pitfalls in basing a play around the life of her spouse, including hagiography. “Truly never been more terrified of writing anything than writing this,” Gunderson announced on Twitter.

She, and they, will quite literally live with the consequences. “The Catastrophist” will be available for streaming from Jan. 26 through Feb. 28.

“My job is to look at people’s complexities and faults, and failures and betrayals,” Gunderson said on a recent afternoon, seated in her backyard next to her children’s trampoline. Her voice was muffled by a paisley face mask. “To turn that kind of eye to my husband, who I love, is bracing. It was way harder than I thought.” 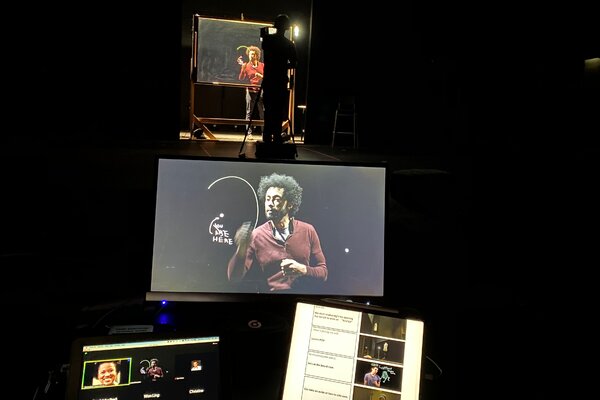 Gunderson’s “The Half-Life of Marie Curie” is streaming through Jan. 17 from TheaterSquared in Arkansas. Her previous subjects include Émilie du Châtelet, an 18th-century French mathematician and philosopher, and Olympe de Gouges, a French playwright and early women’s rights activist.

None were able to peer over her shoulder as she worked. “They are all dead, so they can’t fact check me,” she said. Gunderson said she hadn’t considered writing about her husband until Jasson Minadakis, the artistic director of the Marin Theater, sent her a text proposing the idea. Her initial thought: “No, no — no!"

But she came to believe that her husband would be a good vehicle to talk about the pandemic. Minadakis would direct.

“The Catastrophist” tells the story of Wolfe’s upbringing by a father who, along with other relatives, shares a particular medical vulnerability. It follows his quest as a virus hunter whose early career was spent in Africa and Asia looking for clues to the next major pandemic.

In past science-related works, Gunderson has not hesitated to be educational as well as entertaining. And the Wolfe character’s disquisitions in “The Catastrophist” can have the feel of a National Geographic documentary. “We have only a minor sliver of knowledge of the viral world,” he says. “Viruses are the most abundant life-forms on the planet.”

But at its heart “The Catastrophist” is a personal story about risk and mortality. And at a time when so much in our lives is disrupted or simply just canceled, part of Gunderson’s mission was to open a discussion about how we anticipate and deal with future risks.

In one particularly explanatory scene Wolfe delves into the concept of the micromort — a measurement of the likelihood of death from a particular activity.

Skydiving, at 8 micromorts per jump, is safer than a ride on a motorcycle at 10 micromorts, he tells us. Attempting to climb Mount Everest: 39,000 micromorts. His character admits that he is drawn to adventure sports, more so than his wife.

“I promised her I’d never do anything over 200 micromorts,” he says.

And at the risk of giving away too much, Gunderson, in “The Catastrophist,” explores how a man who spends his life calculating risk can do such a lousy job of assessing it for himself.

Perhaps inevitably for a play written in the throes of a plague there is a meta aspect to the work. Gunderson’s life in the pandemic was tightly intertwined with writing about it.

San Francisco, like so many other cities, has been shaken and transformed since March. Tents sheltering homeless people have proliferated on the streets. Property crimes and drug overdoses have soared. Restaurants have closed, many forever.

But from a purely medical standpoint, San Francisco appears to have beaten the odds. Its rate of deaths from the coronavirus, 27 per 100,000 people, is less than one quarter the national average. In the balancing act that we all face, the city has chosen safety and caution over economic continuity and normality.

Gunderson was cloistered for much of the spring, starting in March when San Francisco and neighboring counties became the first in the nation to order residents to stay at home. She has bought her groceries online since; social interaction outside her family has been limited to a few walks with friends and sparsely attended birthday parties in the backyard for her two children, who are 6 and 4.

But as a writer, Gunderson said, she was not handcuffed.

“I’ve had the freest mind I’ve had in several years,” she said. “The deadlines evaporated.”

That’s not to say putting it on has been easy.

It was filmed the first week of December in the empty Marin Theater, across the Golden Gate Bridge. The crew included a woman whose job was to make sure the director stayed socially distanced from the camera operators; to provide hand sanitizer, gloves and other protective equipment; and to administer coronavirus tests. The tests were so expensive that the crew was forced to cut the filming from two weeks to one.

“We were all building the boat as we were sailing it,” Gunderson said.

William DeMeritt, a Shakespeare specialist whom she recruited to play her husband, flew in from New York and then worked from an auxiliary apartment near the theater, a mother-in-law unit owned by one of its patrons.

“I rehearsed remotely from that little apartment with everyone else on a little Zoom screen,” DeMeritt said.

The filming was done with only half a dozen crew members, each of whom was allowed access to a discrete space in the theater. It was shot in snippets, a novelty for a crew accustomed to works’ being performed from beginning to end.

Gunderson watched from home via livestream.

DeMeritt, who in pre-pandemic days had roles in “Shakespeare in Love,” “The Merry Wives of Windsor” and a handful of television shows, said he hopes the production inspires an industry that has been walloped by the virus. Anything, he said, to help theater survive the pandemic.

He met Gunderson several years ago at the Oregon Shakespeare Festival, and they have kept up a friendship. After agreeing to take the part in “The Catastrophist,” he met with Wolfe and Gunderson on a hike in the Marin headlands, the steep ridges and canyons not far from the Golden Gate that afford wondrous views of the Pacific Ocean.

But DeMeritt said the character he portrays has somewhat rougher edges than Wolfe the man, a tendency toward knowing-it-all that the director, Minadakis, encouraged, in part as a contrast to the personal vulnerabilities revealed in the script.

“Lauren was able to put in some of Nathan’s less fabulous character traits because she knows him so intimately,” Minadakis said.

“I had to encourage Bill to not get up there and play a hero,” he added, “but to play a very human individual who has pride and who has ambition.”

Wolfe has watched Zoom rehearsals and doesn’t seem bothered by the portrayal.

“The play does a great job of showing the mildly irritating features of my personality,” he said in his backyard, before rushing off to take a call. “It’s an honest critique. We all have failings.”

Gunderson said the play was a gift to their marriage. She, a master of words, learned more about her husband’s world of numbers and risk.

And she’s confident she struck the right balance in writing about him.

“The partner in me wanted to make my partner safe and happy and comforted,” she said. “The playwright in me had to push all the buttons and unlock all the secret drawers and make a mess.”