If the image of a young Kenan Thompson wearing flippers and speaking bad French in a bubble bath elicits waves of nostalgia, you’re probably a child of the ’90s.

Same if you know Kel Mitchell as a well-meaning but incompetent fast food worker, or Lori Beth Denberg as a hypocritical librarian who howls at children to be quiet while causing a constant ruckus.

These absurdist characters from the children’s sketch show “All That” were beloved ’90s oddities that could thrive only on cable. From its debut in 1994 to its cancellation in 2005, “All That” was a cultural force in kids’ television, a PG version of “Saturday Night Live” that became known for churning out young talent. The Nickelodeon show helped launch the careers of Thompson, Amanda Bynes, Nick Cannon and Jamie Lynn Spears, while spawning hit shows such as “Kenan & Kel” and “The Amanda Show.”

Now, 25 years after it first launched, Nickelodeon is rebooting “All That” with a new batch of child actors. Thompson, the cast member who has perhaps found the most success as an actor, signed on as an executive producer. The network has marketed the reboot, which airs on Saturday night, as the triumphant return of popular characters like Mitchell’s “Good Burger” cashier and Denberg’s “Loud Librarian.”

In reviving the show, the producers have injected 2019 pop culture onto the classic “All That” framework, a 30-minute booster of joyful silliness that puts children in charge. Instead of giving the show a full makeover, however, the producers have hung on to some of the old skits, hoping the nostalgia will attract millennial parents while maintaining an enduring appeal to their children.

But how can the reboot of a classic television show succeed on nostalgia when its target audience wasn’t even alive for the original? (The president of Nickelodeon, Brian Robbins, said the show is aimed at 6 to 13-year-olds, most of whom were born after “All That” ended.) 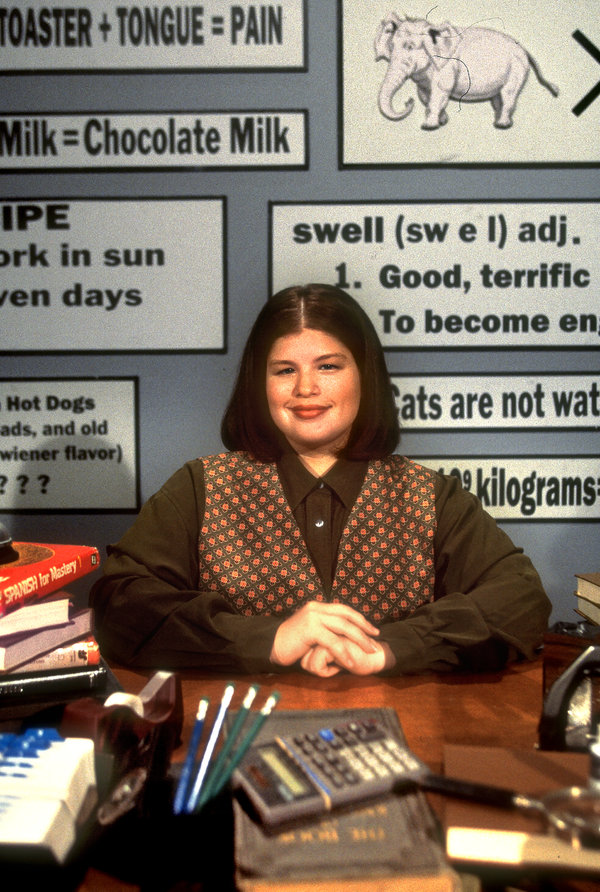 “They’re not going to get the nostalgia because it’s not their nostalgia,” said Denberg, who is returning to the show to play the “Loud Librarian.” “But I think they’re going to love it just the same.”

To figure out what kids today find entertaining, Nickelodeon set up focus groups, where youngsters from 8 to 11 years old were asked to talk about what they like to watch, what celebrities they like, what they find funny. One result from this research was a new skit called “Masked Video Game Dancer Celebrity Edition,” which involves costumed celebrities performing Fortnite-esque dance moves for a panel of judges including Beyoncé, Ariana Grande and Dwayne Johnson, all played by young cast members.

Modern attention spans also demand much shorter skits, the creators said. Kevin Kay, an executive producer on the reboot who also worked on the original “All That,” said that sketches from the ’90s could drag on for seven minutes.

“Kids today watch things in two and three minutes,” he said. “We consciously said we wanted to cut the sketches, do more sketches per episode and never really get to seven minutes.”

A bigger challenge than appealing to today’s young viewers is reaching them in the first place. Unlike when the original “All That” aired in 1994, kids’ shows now compete not only with each other, but with the millions of videos on YouTube.

Traditional marketing is no longer sufficient, said Robbins who was also a creator of the original “All That.”

“We have to make sure we’re reaching kids everywhere they’ve been consuming content,” he said.

That means posting heavily on the show’s Instagram account, where they tease new sketches, revive old material and introduce the new cast members (or, the “new kids of comedy,” as the network called them). It also means posting sketches on YouTube, which executives see as a funnel to the actual show.

Occasionally others have indirectly marketed the show for them, as when Chance the Rapper, a ’90s kid himself, recently posted an Instagram video of him dancing to a remake of the “All That” theme song, complete with a Gospel choir singing the chorus.

Robbins said that the original theme song by TLC will stay, at least for now. (Many of the old fans might revolt if it didn’t.) But Robbins said they might decide to change the song later on — possibly even to the modernized version Chance shared.

Robbins, who became the president of Nickelodeon last fall, was the driving force behind the reboot, personally reaching out to people involved in the original show to ask them back. Thompson said that Robbins visited him at “Saturday Night Live” to pitch him the idea, and Thompson was all in.

Kay, 64, said he hadn’t been in children’s television for over a decade when Robbins approached him about the new “All That.” At first he was uncertain whether he still had a grasp on what young people found entertaining, but he figured his preteen son could help him learn.

Mitchell, 40, has stayed tied to kids’ television and Nickelodeon over the years, most recently starring as a rapper who teams up with two girls to run a gaming company in the channel’s “Game Shakers.” As such, he’s kept his “ear to the streets” in regard to what youngsters find funny, he said.

Others behind the reboot grew up watching the original show. Jermaine Fowler, an “All That” executive producer, said the diversity of the original cast was eye-opening for him as a child. In 1994, three of the seven cast members were black and another was Latina.

“It was the first time I saw kids who looked like me on TV doing sketch comedy,” said Fowler, who is black. “That was so inspiring to me.”

The original “All That” featured hip-hop and R&B artists at a time in which doing so was rare on a kids’ channel. The musical guests in the first season included TLC, Brandy, Aaliyah and Usher. (The first episode of the reboot will feature the Jonas Brothers.)

Fowler, 31, who is best known for his roles in the sitcom “Superior Donuts” and “Sorry to Bother You,” said the talents and sensibilities of the seven young cast members are heavily influencing the script.

A 14-year-old cast member Gabrielle Green, for example, brought in a Beyoncé impression that the writers couldn’t resist, Fowler said. Another cast member, Nathan Janak, 14, performed a hilarious Ariana Grande. In the ’90s, the cast members often did impressions of Oprah and Roseanne.

Though the cultural references in the show have been transformed, the producers say the comedic heart of the show remains the same. That means an abundance of silliness, absurdity and, of course, destruction.

“One of the things we know about ‘All That’ and about kids comedy is that they love to see things get blown up or broken,” Kay said.

In one sketch, a cast member playing the decluttering guru Marie Kondo is tasked with helping kids organize their homes. She asks if items in the room “bring joy,” and if they don’t, she destroys them. At one point, the Kondo character (called “Marie Kiddo”), cackles as she takes a jackhammer to a couch. The sketch is reminiscent of one from the ’90s in which Kel Mitchell, playing a repairman, gleefully destroys everything he is asked to fix.

The original iteration of “All That” also included sporadic impressions of politicians. The characterizations were silly and harmless — “Ross Perot” had a squeaky voice and exaggerated ears, but his antics had little to do with serious politics — but even so, the current producers are still determining how prevalent they should be at a time when American politics is polarizing for all ages.

One of the cast members, Ryan Alessi, 14, does a “dead-on” President Trump impression, but “you could never do a sketch on Nick that disrespected the president,” Kay said. “We’re not steering toward politics — if anything, we’re steering away.”

Thompson, 41, who joined “Saturday Night Live” a few years after leaving “All That,” said that his main concern was the vulnerability of the young cast members making political jokes in this partisan climate.

“These are kids,” he said. “I don’t want anyone looking at the kids in any malicious way because they’re making a joke.”

Thompson said that he sees the show’s purpose as being an “escape from reality” for kids. It’s something that he can now share with his children, including his young daughter, he said. Mitchell said he has passed down the original “All That” episodes to his children as well.

This aligns with a broader goal the creators have for the reboot. While they don’t expect young viewers to find deeper resonance in, say, a “Good Burger” sketch, the hope is that adults who catch those references will decide to sit down on the couch and watch with their children.

“I’m hoping it will bring family entertainment back,” Mitchell said, “where everyone is watching TV in the same time.”