What is it like to have been a Marine in Afghanistan and returned there as a journalist? That’s a question I get asked a lot.

I never really have an answer.

The 20-year-old and 22-year-old versions of myself who deployed to Helmand Province in 2008 and 2009 as an enlisted Marine infantryman were just that, different versions. A decade later, what’s left of them are two old journals and an entry left behind from my first deployment that I recall quite often.

“I think it’s the end of Day 20 out here,” I wrote in early May 2008. “It’s hard to explain this place, and I feel it’s going to take the rest of my life to figure out what happened here.”

It has been 11 years since I wrote that passage, and it’s still just as true. Granted I figured out what happened in Helmand Province in 2008. It was the first chapter in a misguided counterinsurgency strategy built atop the constellation of outposts that the American military eventually handed to the Afghans in 2014. We watched them collapse under the Taliban in the months that followed.

But this month I walked out the back of a helicopter after it landed at a dusty American Special Forces outpost in eastern Nangarhar Province. The war hadn’t ended, just those earlier chapters from my 20s.

The gravel felt familiar. The drone of the generators sounded familiar. The discarded burning trash on the small base’s periphery smelled like the place I once called home for nearly two years.

I was back in some estranged corner of “my war” to report on the American military’s war against the Islamic State affiliate in the country. At this small base, called Mission Support Site Jones, a Special Forces team and a consortium of other soldiers were trying to keep the extremists relegated to the mountains along the Pakistani border. 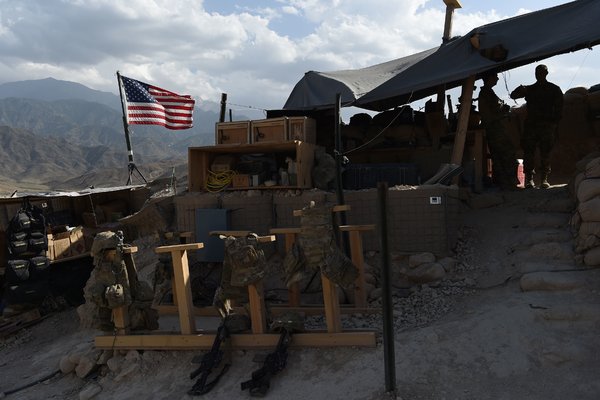 It was a strange thing, coming back to a place that seemed stuck in time, ripped from an earlier version of my life. But they had Wi-Fi — we certainly didn’t have that in 2008.

At dusk, I kept expecting to bump into friends from my platoon: Jorge, Ryan and Matt shuffling back from the PVC pipes half buried in the ground that doubled as urinals; their outlines distinctly recognizable after so many days in the field.

But my friends are long gone. Jorge is a police officer outside Houston. Ryan works construction in Northern California. And Matt is dead. In their place were three random soldiers — 20-somethings who eyed me with suspicion. Just as we used to do when a reporter showed up in Helmand with unclear intentions from an outlet we had never heard of or cared to follow: Reuters? BBC? What does NPR stand for?

Early the next morning I climbed up into one of the watchtowers on the southern corner of the base. The sentry had just started his six-hour shift. He didn’t say much and I just stared at the mountains in the distance.

A decade ago that would have been me. Easing back on a chair of makeshift sandbags and deciding what I wanted to think about for the next half-dozen hours or so. Sifting through a shelf of memories, my brain then mostly filled with remnants of high school and the 10 days of leave before we deployed.

“You were probably told to avoid talking to me,” I said to the soldier leaning on the tower’s machine gun.

It was a rhetorical assertion, but my nostalgia had been replaced with the slow realization that I was currently employed by The New York Times and not the United States Marine Corps.

The soldier acknowledged the question and said little else, other than that his platoon sergeant had very much reinforced that point before my arrival.

Thomas Gibbons-Neff is a reporter in the Washington bureau and a former Marine infantryman. @tmgneff